Magic of Christmas volunteers deliver gifts, cheer to those who need to lift their spirits at Christmas.
0
Dec 2, 2019 3:30 PM By: Krista Conrad 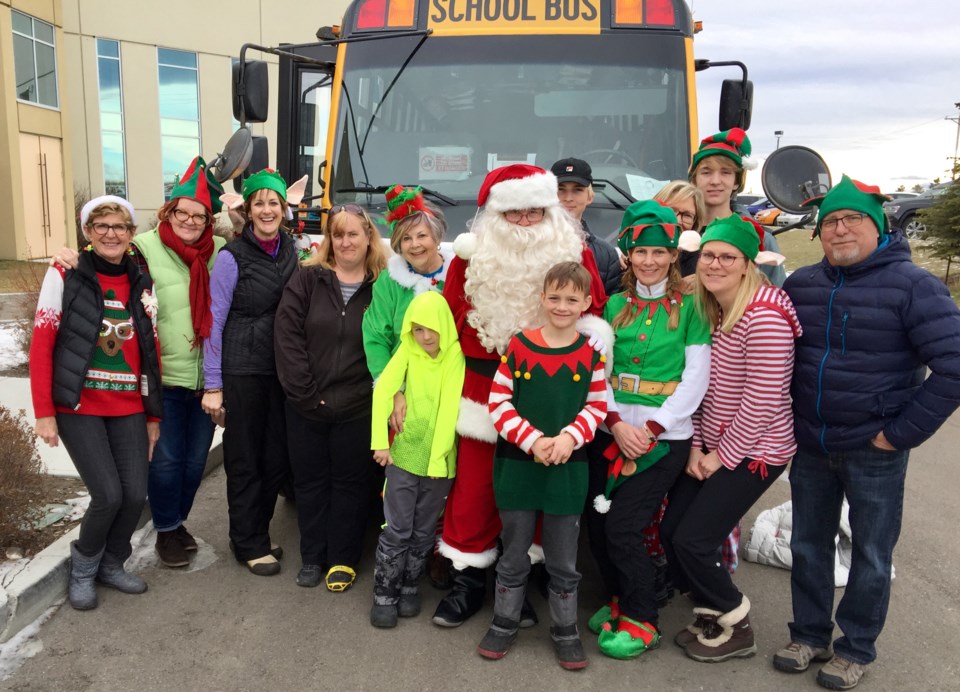 Magic of Christmas elves gather for a group photo before boarding one of the Okotoks buses in 2018. Delivery day this year is Dec. 21. (Photo submitted)

Spreading joy is the reason one elf has hopped on a gift-laden bus each Christmas for nearly a decade.

Debi Hartle has volunteered with Magic of Christmas since about 2011.

“I enjoy bringing joy to everybody over the Christmas season,” said Hartle. “It’s just a great way to give back.”

Magic of Christmas is designed to bring cheer to people in need of a pick-me-up during the holidays, whether they find themselves in financial, emotional or medical distress.

Hartle began bringing her four boys along to volunteer when they were young, wrapping donated gifts the week before the buses hit the streets to spread spirit and deliver presents and friendly visits to local families and individuals who could use a hand up.

At first she rode the bus as an elf without them, but as they got older she was able to bring one of her children with her each year.

“They enjoy it,” said Hartle. “They still help wrap presents and deliver the oranges, help load the buses on the Friday night before.”

It takes a lot of hands to make the work light, she said. Magic of Christmas relies on a host of volunteers each year.

The work is hard but rewarding, she said. While on the bus they often stop to “elf” people who are out walking their dogs, giving them dog treats, small gifts and candy canes.

“It’s not just visiting homes, it’s spreading joy to everybody we see throughout the whole day,” said Hartle. “We see everybody. We see single parents, we see people who have lost their jobs, people who have a recent cancer diagnosis. Whoever needs joy, that’s where we go.”

Magic of Christmas is one of eight charities receiving funding from the 2019 Wheel Cares campaign.

Organizer Donna Cameron said the funds will be appreciated this year, as the organization lost a couple of major donors and is finding itself a little short on cash this year.

“That money would always go to gift cards or things like that,” said Cameron. “It’s hard to say for gifts, although it looks like it’s coming okay. It’s hard to say until you know how many families and children you’ve got.”

Donations can be dropped off at several locations throughout Okotoks, High River and Black Diamond, including the Western Wheel office. The deadline for items is Dec. 11, to allow time to organize and wrap everything, she said.

There is always a level of anxiety leading up to delivery day – this year on Dec. 21 – because of uncertainty with the number of gifts, but it always seems to work out, she said.

It’s come a long way since Magic of Christmas first started in Okotoks around 1990, she said.

“I remember starting out with this, we had $500 and we would do it all on that,” said Cameron. “Of course, it wasn’t near to what it is now, be it client-wise of gift-wise, but it always works out.

Typically the buses going to other community have items for about 20 to 25 families and Okotoks is closer to 30, she said. In 2018, there were 61 families in Okotoks.

It’s not always financial situations that bring Magic of Christmas to someone’s doorstep, she said.

“There’s medical reasons, there’s loss of jobs, there’s families that have lost loved ones, grannies with no families, just single people in their homes by themselves,” said Cameron. “Our mission is to bring joy. That’s our main mission, is just to stop and let them know we’re thinking of them and it makes them pretty happy.”

She said the best part of the project for her is the big finale, riding the bus and seeing the looks on peoples’ faces when they are touched by the Magic of Christmas.

Every elf on the bus is excited, no matter how exhausted they may be after a week of wrapping, organizing and loading gifts, she said.

“The elves all put a lot of work into it, and it’s so worth it just to see the smiles,” said Cameron.

Donations of $10 or more will receive a 2019 official tax receipt at the end of the campaign. For more information call the Western Wheel office Monday to Friday from 9 a.m. to 5 p.m. at 403-938-6397 or email Gayle Wolf at gwolf@okotoks.greatwest.ca