Crowds stampede to Battle of the Foothills 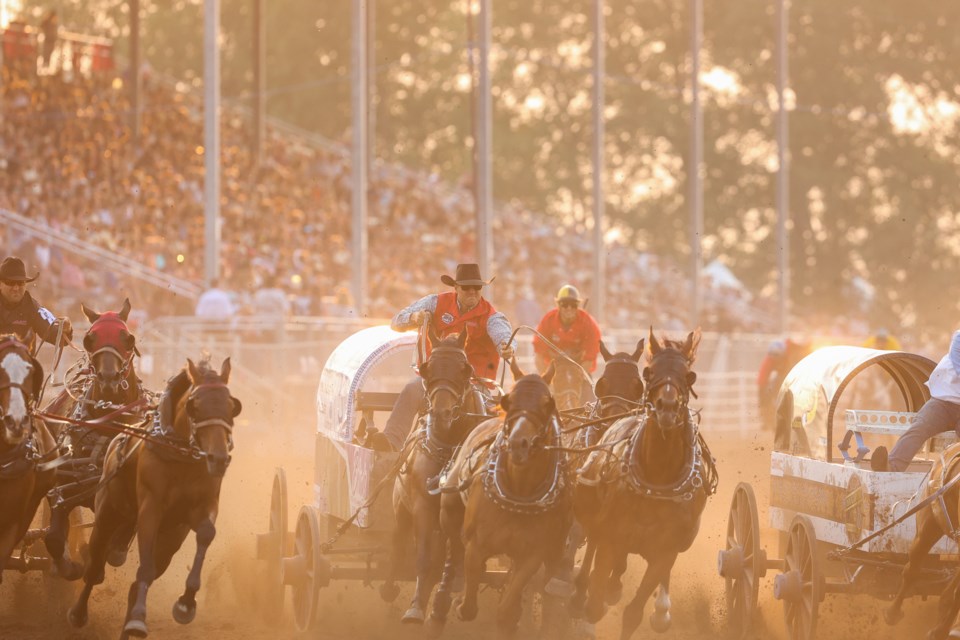 Jordie Fike enters the fray in heat five of day one at the Battle of the Foothills chuckwagon races at the High River Agricultural Society on July 16. The Battle continues July 23-25.Brent Calver/OkotoksTODAY

Chuckwagon drivers are usually quite concerned about consistent times.

But Blackie’s Jordie Fike and a few of the other drivers were smiling on Friday and Saturday night when the Battle of the Foothills in High River was a bit late in starting.

“It was an hour before race-time and a few of the guys were looking at the line-up on the highway to get in,” Fike said on July 19 after the third night of racing. “We had to go a bit late, but the guys were excited.

“This crowd is electric. It almost gave me goosebumps that first night.”

The Battle of the Foothills drew large crowds – a sellout on Saturday -- for the first three of six nights of racing July 16, 17 and 19. With the Calgary Stampede giving wagons a pass this year, the battle was the only game in town in southern Alberta.

“I have seen a lot of chuckwagon races here and I have never seen crowds like this before,” said Carl McGovern, Battle of the Foothills chairperson. “People have been locked up for a very long time and people needed somewhere to go.

There were some special moments during the Battle of the Foothills. A young boy had made a Make A Wish request for the Calgary Stampede experience, but the wagons were missing this year.

“They found out we were having racing in High River,” McGovern said. “The Mavericks (driver Chanse Vigen's sponsor), heard about it and graciously took him into the VIP experience.

“Then they took the kid back to meet the drivers… I was just tearing up.”

The third night of racing, Sunday, was cancelled due to smoke and ran Monday instead. It was a decision made by the High River Ag Society and drivers for the safety of the horses and the spectators.

“We talked to some top vets – leading respiratory vets – and we consulted with them,” said three-time defending world champion Kurt Bensmiller. “We don’t take these decisions lightly. We always consult with the veterinarians.”

The crowds took Bensmiller’s breath away.

“High River has always had a good turnout,” Bensmiller said. “But this year, when you turn for home, you can hear the crowd going from the fourth corner on.

“They are cheering every driver. It is just a real chuckwagon event.”

The Battle of the Foothills continues July 23-25, with the final day of qualifying for the two semifinal heats going on Friday.

Vern Nolin leads after three days of racing with an aggregate time of 3:55.09.

Local fan favourite Fike is in prime position to qualify for the semifinals, sitting in fifth-place at 3:58.72.

“I am going to the one barrel on Friday and we will hook some power there and just go for it,” Fike said, with daughter Lawni in his arms after Monday’s races. “The horses are running the race days, no problem.”

Dayton Sutherland, from just outside Okotoks in Foothills County, is knocking on the door of the semifinals in ninth-place.

“I think I can make it,” Sutherland said. “I go to the one barrel with a fresh set of horses. I think I can sneak into the top eight.”

He’s a busy guy at the Battle.

Sutherland is helping pay the bills by taking on some extra work. When he is not driving his wagons – he is racing two outfits – Sutherland is outriding.

“I have four or five heats outriding and then two driving heats – it’s busy,” Sutherland said. “I have a solid crew back at the barn. A lot of help to be this busy.”

The July 23 races start at 7 p.m., while Semifinal Saturday runs at 7 p.m. as well. The Sunday finals start at 4 p.m. and will conclude with the Dash for Cash final for the title. The dash will consist of the four drivers with the best times in the semifinal heat from July 24.

For the full standings go to wpca.com. For ticket information go to www.highriverag.com