A recorded conversation in the summer of 2017 at an Okotoks donut/coffee shop has led to allegations of a United Conservative Party candidate planning a “kamikaze run” to help Jason Kenney in his successful leadership bid.
Dec 19, 2018 12:12 AM By: Bruce Campbell 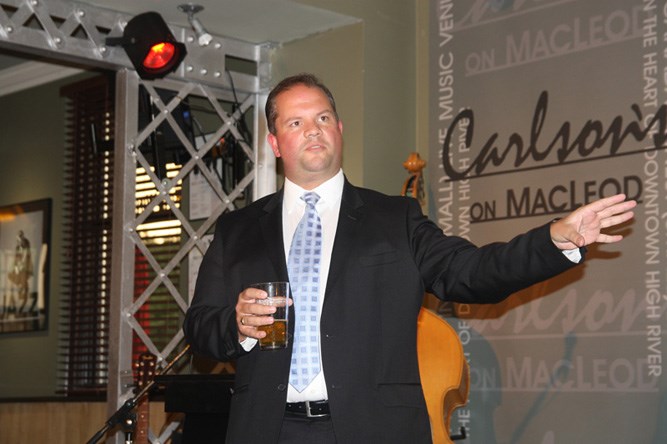 There were concerns raised after a six-minute audio was leaked that former Wildrose president Jeff Callaway, above speaking in High River in September 2017, ran a kamikaze campaign for the UCP leadership, which was won by Jason Kenney.

A recorded conversation in the summer of 2017 at an Okotoks donut/coffee shop has led to allegations of a United Conservative Party candidate planning a “kamikaze run” to help Jason Kenney in his successful leadership bid.

Wendy Adam of Okotoks, a former director with the Highwood Wildrose Constituency Association, is recorded stating former Wildrose president Jeff Callaway would run against Kenney, Doug Schweitzer and former Wildrose party leader Brian Jean to not only take away votes from Jean but to also make comments against him.

“The reason we are running Jeff as a serious campaign is because Jeff will be able to say things about Brian Jean that Jason Kenney can’t,” Adam is heard saying in the recording.

In the recording she said the Callaway team would “probably pull the plug, Sept. 15, Sept. 20. The second reason is Jason cannot say the things that need to be said… Jason can’t say things about [Jean}that Jeff Callaway is prepared to say.”

The man who recorded the conversation is later heard stating, “So Callaway is doing a kamikaze run?”

To which Adam replied: “Yes.”

The conversation was recorded in early August of 2017 by an Okotoks man over a coffee in the community.

They were joined by Wendy’s husband Udo, who said little during the approximately six-minute recording that was leaked.

The man confirmed it was him, Udo and Wendy at an Okotoks Tim Hortons in early August of 2017. Callaway announced his candidacy on Aug. 10, 2017. In September of 2017, he made a campaign stop in High River, virtually the same day he announced his plan to buy the railway line to Churchill, Man. to help get grain and oil to market.

He also compared the Wildrose finances under Jean’s leadership to the NDP as the party racked up a debt.

Callaway pulled out of the race on Oct. 4 and endorsed Kenney.

The latter defeated Jean and Doug Schweitzer on Oct. 28 collecting 61 per cent of the vote.

The Okotoks man, who was active in the Highwood Wildrose and UCP constituency, told the Western Wheel he recorded the conversation to protect himself concerning a different issue and had no idea the UCP leadership race would come up in what he thought was a chat over coffee.

The conversation went on for approximately an hour, only the six minutes concerning the Callaway campaign were leaked. “I have no idea,” said the man, when asked how the conversation was leaked.

In Canada if one person is aware of a recording, it is legal.

Callaway stressed in an email to the Western Wheel, he ran his own race on merit.

“I ran on my own merits as the president of the Wildrose Party, which was a nine-year commitment of which I was the president for the majority of that time,” Callaway wrote.

“I had three big ideas: a natural gas energized economy, access to tidewater, (my Churchill plan), and bringing investment back to Alberta.” He added he will remain focused on the Conservatives forming the next government.

“As we approach the next election over the coming months I will not be distracted by those who wish to create division and confusion amongst the electorate,” he said.

“Alberta faces a fork in the road between economic prosperity or paralysis. As Conservatives we must stay united to get our Province back on track. I will be working with my fellow UCP members and candidates to elect a UCP government.”

In an email request to the UCP for a response, executive director Janice Harrington replied: “We won’t comment on an audio clip that we were not party to,” she wrote.

“I can say there was nothing in the UCP leadership rules against campaigns talking to one another, as that would not be unusual in a ranked ballot election.” Highwood MLA Wayne Anderson said he was disappointed when he first heard the audio.

“I was very discouraged, it kind of caught me off guard,” said Anderson, who had backed Jean.

“It sounds to me that everything that was recorded actually came to fruition during the leadership campaign. Whoever was co-ordinating the campaign managed to follow that process almost to the T compared to what was said on the audio recording.”

He added his understanding is the audio has been available on YouTube since March. He said he has not heard anything concrete as to what will happen in the future because of the audio.