Amateur radio operators in Okotoks spent last weekend showcasing their abilities in a global competition.
Jun 30, 2020 8:30 AM By: Tammy Rollie 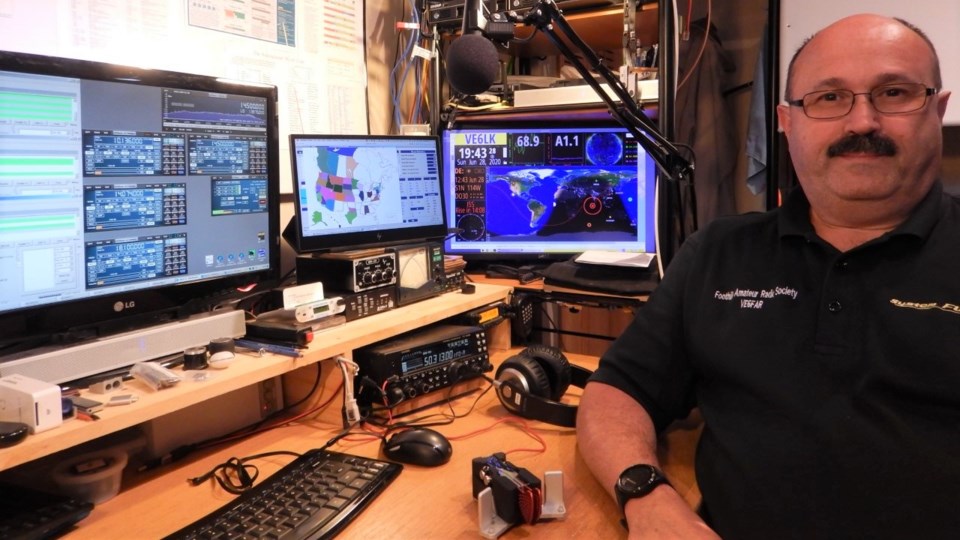 Vince d'Eon, secretary of the Foothills Amateur Radio Association, sits at his station in his Okotoks home during last weekend's 24-hour competition between amateur radio operators from around the world. (Photo Submitted)

The North American-based competition requires radio operators to set up under adverse conditions, such as operating without a commercial power source, to see who can contact the most people at the greatest distance in a training exercise for emergencies, said Vince d’Eon, one of the participants and secretary of Foothills Amateur Radio Society.

“Some people think of ham radio as very old school technology, but yesterday we transmitted email over radio,” said d’Eon on Sunday. “We’re passionate about what we do. It’s an interesting hobby. It’s all for fun.”

Ham radio operators around the world set up radio stations, most from their homes in light of the COVID-19 pandemic, to make contact with others as both a display and a test of their emergency communications capabilities.

Six people from Okotoks and one from DeWinton competed, said d’Eon. The club consists of 45 members.

d’Eon said participants typically set up in a public location, but due to restrictions surrounding the pandemic most operated remotely and virtually from their homes.

“Typically we host them at fire halls,” he said. “Fire halls like to have us because they like to understand what our capabilities are in a disaster situation.”

To allow for public engagement this year, the society held a conference call via Zoom during the competition where more than a dozen residents tuned in, some from as far away as New Brunswick.

“People could watch society members on their radios and interact with us,” he said. “It can be very simple gear and it can be very complicated gear.”

In his own home, d’Eon operated one antenna on his high-frequency radio using solar-generated electricity to communicate with competitors as far away as Japan.

“I have to monitor it to make sure I have enough sunlight to keep running,” d’Eon said Sunday morning.

The society ran four transmitters on Saturday and two on Sunday, and contacted more than 250 locations around the globe, he said.

While ham radios may seem archaic compared to today’s technology, d’Eon said the radios are ideal for communicating during emergencies compared to cell phones and satellite phones that can be knocked out.

He said the Foothills society was called upon by the Province to be the heart of communications during the 2013 southern Alberta flood after conventional communication infrastructure failed.

“Fifty-five ham radio operators worked around the clock keeping High River connected to the world,” he said, adding the society had been setting up for a field day west of Okotoks when the flood hit.

The society typically sets up a field day for the competition in the Foothills or Calgary area, which takes place the last full weekend in June, d’Eon said.

“We call ourselves electronics nerds who like to help out during emergencies,” he said. “Tens of thousands of people participate around the world.”