Soprano Cara McLeod and pianist Emilio De Mercato of the Alberta Symphony Orchestra will be visiting Okotoks for their Music in the Air tour with guest performance by mezzo soprano Barbara King
Jul 21, 2021 12:00 PM By: Brent Calver 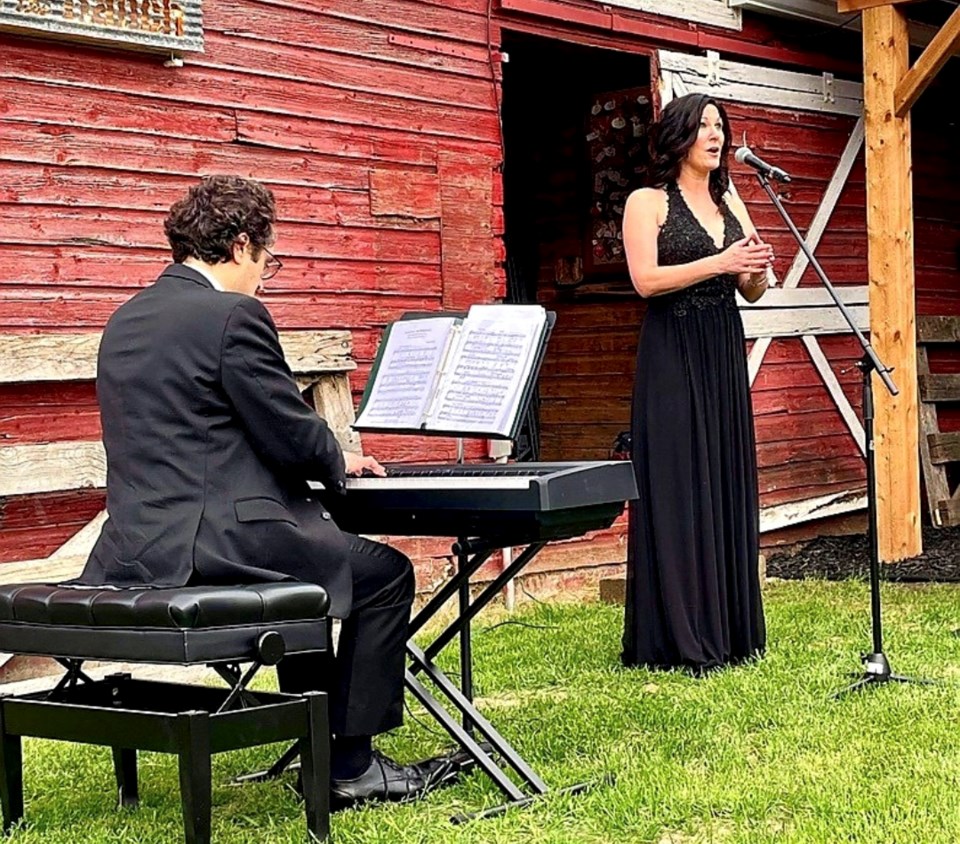 Soprano Cara McLeod and pianist Emilio De Mercato of the Alberta Symphony Orchestra will be visiting Okotoks for their Music in the Air tour, a series of outdoor recitals held in informal settings. (Photo submitted)

Music will be in the air as a classical duo pays a visit to Okotoks.

Soprano Cara McLeod and pianist Emilio De Mercato of the Alberta Symphony Orchestra are stopping Okotoks as part of their Music in the Air tour, a series of outdoor recitals held in informal settings.

The Okotoks stop is taking place at an acreage off of Big Rock Trail.

“We talked about going to different public spaces, and it just kind of evolved from there,The connections have been amazing, because people have missed live music so much.”

With both musicians having done plenty of online and outdoor performance throughout the COVID pandemic, McLeod said the concept came together at the end of last winter.

“We got together in March and decided it would be a great idea to create a concert series,” she said. “It’s definitely a win-win for us and the audience, as it’s been really beautiful.”

During the approximately 40-minute program taking place at 6:30 p.m. on July 23, the audience can expect a blend of classic and contemporary music.

“It’s kind of unique just in the repertoire that we’re doing, classical and opera with a bit of crossover and pop music as well,” McLeod said.

The diverse environs have been far from the comforts of a world-class concert hall.

“It’s a different acoustic for me singing into a microphone with classical repertoire,” McLeod said. “It’s a challenge singing outside with the wind, the cats, the dogs, the sirens, the airplanes, helicopters, and weather.”

The difference is also real for the instrumentals of De Mercato, who is also the founder and music director of the ASO.

“And for Emilio of course, playing on a grand piano in a concert hall is kind of the pinnacle, and he’s also a conductor with the Alberta Symphony Orchestra,” she said, adding they even performed one show after electricity failed at the location.

“Our audience was amazing, they waited with us, so that was incredible,” she said. “Honestly, everything is an adventure.

“But we just really believe in the music and so it was still a labour of love.

“Even though there’s all these other kinds of issues to contend with that are outside of our norm, I do love a good adventure.”

What makes it worth it is being able to get in front of an audience again.

“I could cry, it’s really beautiful, people are grateful for the tour,” she said. “They haven’t heard live music for so long, so it’s just been really magical.”

“I think people are really starving for these concerts since COVID,” King said. “And I think it's really important that they're putting this on.

“We were all waiting for the government to open things up again, because it hit the arts really hard.

“It’s almost surreal, because we’ve been locked down for so long, and we’ve been singing online for so long. I’ll never get used to that. It’s not the same thing. We’ve been dying for a live audience.”

Patrons are encouraged to bring their own chairs or blankets.

There will be parking on site at the property, 47 Big Rock Trail, but there will be no public washrooms.

Admission is by donation to the Alberta Symphony Orchestra Society to help cover the cost of the Music in the Air Tour, with a recommended $25 per person amount, for which a tax receipt would be issued.

Visit www.facebook.com/MusicintheAir2021 for more information about the tour.