Albertans are being hit with a 50 per cent carbon tax hike at the pumps and in their homes after the provincial carbon tax rose with the start of 2018. Highwood MLA Wayne Anderson said the increase has been “pretty devastating” for most Albertans.
0
Jan 10, 2018 12:00 AM By: Krista Conrad 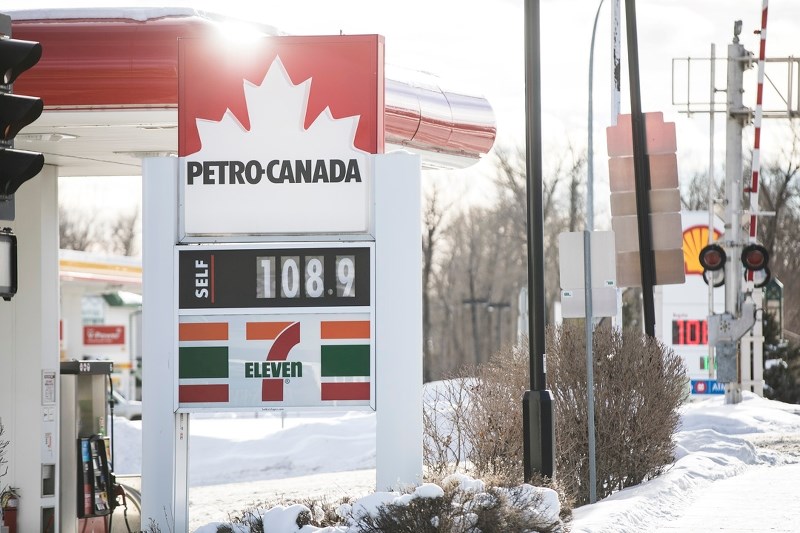 Gas station signs display prices on Jan. 6. Albertans are concerned about the increase in gas prices as the NDP government&#8217;s carbon tax rises to $30 per tonne.

Albertans are being hit with a 50 per cent carbon tax hike at the pumps and in their homes after the provincial carbon tax rose with the start of 2018.

Highwood MLA Wayne Anderson said the increase has been “pretty devastating” for most Albertans.

“A 50 per cent increase on Jan. 1 in probable one of the coldest winters we’ve had in Alberta, and people are being faced with not just heating their homes, but the cost of everything has gone up,” said Anderson. “We’re getting to the point now it’s pretty ridiculous that this government wants to continue on this uncampaigned campaign promise.”

Based on its new rates, the Province estimates the average household (a couple with two children) would see total levy costs of $508 in 2018. This is based on consumption of 135 GJ of natural gas per year and gasoline use of 4,500 L per year.

The carbon levy rebate issued to the same family would be $540, according to the provincial government’s website.

Anderson said the rebate is not enough, because it’s not just about how much people pay at the pump or on their heating bills.

“We’re getting a lot of feedback from people that they’re really unhappy with the cost, the impact of the carbon tax increase on households in Alberta, particularly in our area,” said Anderson.

He said businesses like local Mullen Trucking L.P. will feel the brunt of the increases, as the price of diesel skyrockets. In turn, consumers will be affected by the increase of goods due to transportation costs, he said. Farmers will be hit in the spring, when they start running diesel-fueled tractors to seed crops, he said.

The NDP has indicated the carbon tax is meant to provide incentive for Albertans to become more energy-efficient and use less fuel, but Anderson said that doesn’t really apply in rural communities.

“That’s really an urban myth,” he said. “In urban centres, you could probably take mass transit or in the springtime people could ride their bicycles to work. But we live in a rural constituency, in a rural community, and all goods and services – and people – have to be transported somehow, and we transport them by fossil fuels.

“It’s interesting they’d have this urban reality without even considering the costs of the impact on rural areas in Alberta.”

Phone calls to the Alberta minister of environment and parks were not returned prior to press deadline. However, on its website the Province states putting a price on carbon is “the most effective way to reduce greenhouse gas emissions that cause climate change.”

The first phase of the carbon tax came into effect on Jan. 1, 2017 with plans to raise the levy by 50 per cent, to $30 per tonne in 2018. According to the website, the tax is reinvested into the economy to pay for efforts to reduce emissions, pay rebates to Albertans to offset increases, pay for renewable energy projects and green infrastructure, and research and innovation.

There are currently no plans to revisit or increase the carbon tax in 2019.