Sweet treats and holiday fun are set to bring smiles to families and funds to the Foothills Country Hospice. The second day of Chinook Honey Company’s 14th annual Christmas at the Hive event runs on Dec. 9 from 10 a.m. to 5 p.m.
Dec 6, 2017 12:00 AM By: Krista Conrad 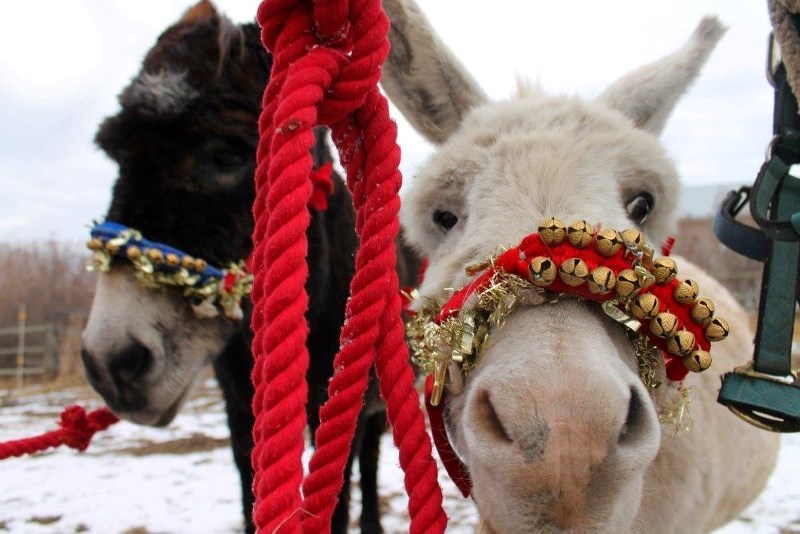 Christmas donkeys Isabella and Snowball will be onsite at Christmas at the Hive on Dec. 9. The event benefits the Foothills Country Hospice.

Sweet treats and holiday fun are set to bring smiles to families and funds to the Foothills Country Hospice.

The second day of Chinook Honey Company’s 14th annual Christmas at the Hive event runs on Dec. 9 from 10 a.m. to 5 p.m., with indoor and outdoor events all in support of the hospice.

“It’s kind of become a family tradition for people, just something that’s not far away, it’s free admission, you can participate and buy the tickets as much you want,” said Andrews. “So for a family to attend it’s actually quite inexpensive and just a fun way to spend half a day out in the country enjoying winter, we hope.

Though there may not be much snow on the ground this week, Andrews said they always manage to find enough of the white stuff – or at least some ice – to make their honey snow candles.

Tickets to participate in activities like the candle or taffy-making cost $2 each, with all the proceeds going to the Foothills Country Hospice, she said. There are also s’mores kits available for a $2 ticket at the fire pit on-site.

There is also mulled mead and honey hot chocolate available, as well as free mead tours, she said. The Discovery Centre will have a colouring station and someone on-hand to talk about bees, she said.

Two of the biggest hits of Christmas at the Hive are the Christmas donkeys, she said.

“It’s a good chance to visit with Snowball and Isabella,” said Andrews. “They’re super friendly and a lot of people even like to do a little Christmas family photo op with the donkeys.”

The second day of Christmas at the Hive also sees the annual honey baking contest, which will take place indoors with judging starting 11 a.m. in three categories: Children (up to 12 years old), Youth (13 to 17 years old) and Adult. Each recipe must include at least one-quarter cup of honey.

Guest judges for the competition include two chefs – one from SAIT’s culinary arts program and one from a Calgary high school cooking program – as well as Dawn Elliott, executive director of the Foothills Country Hospice.

Elliott said the hospice has appreciated receiving the proceeds of Christmas at the Hive for the past five years. Last year it received $3,216.37 from the event.

This year, she said the funds raised will go toward the hospice’s grief support program.

“We reach out to family members of patients who have been here and we have meetings with the families, group meetings, and just help them through their grief,” said Elliott. “If one-on-one counselling is needed we provide that as well.”

She said the money raised at the honey farm is enough to cover a large portion of the program costs for the year. There are 12 meetings per year on the first Monday of each month, she said.

At this time the meetings are open only to families of patients who have been at the hospice, though she said the hospice would like to begin expanding some of its services in the near future.

“That’s something we’ve definitely talked about, is widening that group who are eligible to come and provide counselling,” said Elliott. “We’re in the very preliminary stages of looking at that.”