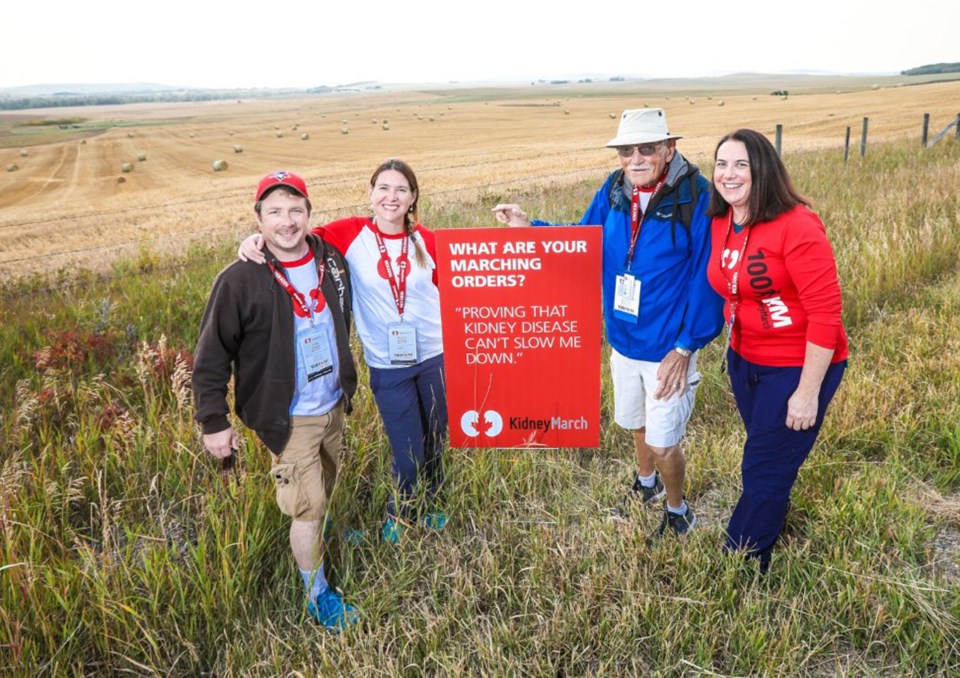 The Chernoff/Sharpe family participated in the 2018 Kidney March. They are, from left, Andy Sharpe, Angela Sharpe, Paul Chernoff and Joanne Milln (Missing team member from Urine Good Hands is Hailey Rosborough, as the 2019 march in September is her first year walking). (Photo courtesy of Angela Sharpe).

Time marches on for a family which is helping one of its members battle kidney disease.

The Chernoff/Sharpe family is marching in the 100km Kidney March Sept. 6-8 starting in Millarville and one of those members include Okotokian Paul Chernoff, 71, who has failed kidneys.

“My dad, who is walking with us has been on dialysis for the last 10 years,” said Angela Sharpe, captain of the family team, Urine Good Hands. “My dad walked last year and we walk with him… He is quite the inspiration.”

The family is hosting a fundraiser for the event on July 23 at Okotoks' Royal Duke Pub.

Chernoff didn’t quite complete all three of the 33km legs of the 100km march.

“He made most of it last year, he was pulling us along,” Sharpe said. “But he missed a few kilometres each day just because he walks a little bit slower – and he has to wait for us to pee, because he doesn’t have to obviously.”

However, he takes care of that business later.

“My dad gets to do dialysis from home, some people aren’t quite as lucky,” she said. “He is doing it six nights a week. So when he is doing the march, he goes home at night and then does dialysis and comes back the next day.”

Sharpe walked in the initial Kidney March some 10 years ago, shortly after her father was diagnosed. She missed one in the past decade when dad had a medical operation and another due to other family commitments.

“We have been involved since the first year,” Sharpe said. “I think my dad signed up this year because my daughter (Hailey Rosborough) signed up, he thinks it is pretty cool that his granddaughter is doing it with him. That's three generations.

“She’s pretty athletic – I am probably the least athletic of the five of them.”

Prior to his walking in the march, Chernoff would participate by assisting with setting up tents.

The first day of the march goes to near Bragg Creek and the walkers are then bused to a camp close to Redwood Meadows. The second day, they are bused to Elbow Falls and they walk back to the camp.

The final day has them going from the camp to Canada Olympic Park.

The other members of the team are Sharpe’s husband Andrew Sharpe and Okotoks family friend Joanne Milln.

They have some work to do besides building up their collective legs for the 100km jaunt.

A fundraising dinner and silent auction wil be held at the Royal Duke on July 23. Tickets are available here.

Those individuals who can’t make the supper are invited to participate in the silent auction and maybe drop in for a pint.

For more information about the Kidney March go to kidneymarch.ca