Car buff gets an Indy experience

Okotoks: Norm Castiglione gets a thrill of a lifetime by helping Foothills Country Hospice
Jul 11, 2019 7:00 PM By: Bruce Campbell 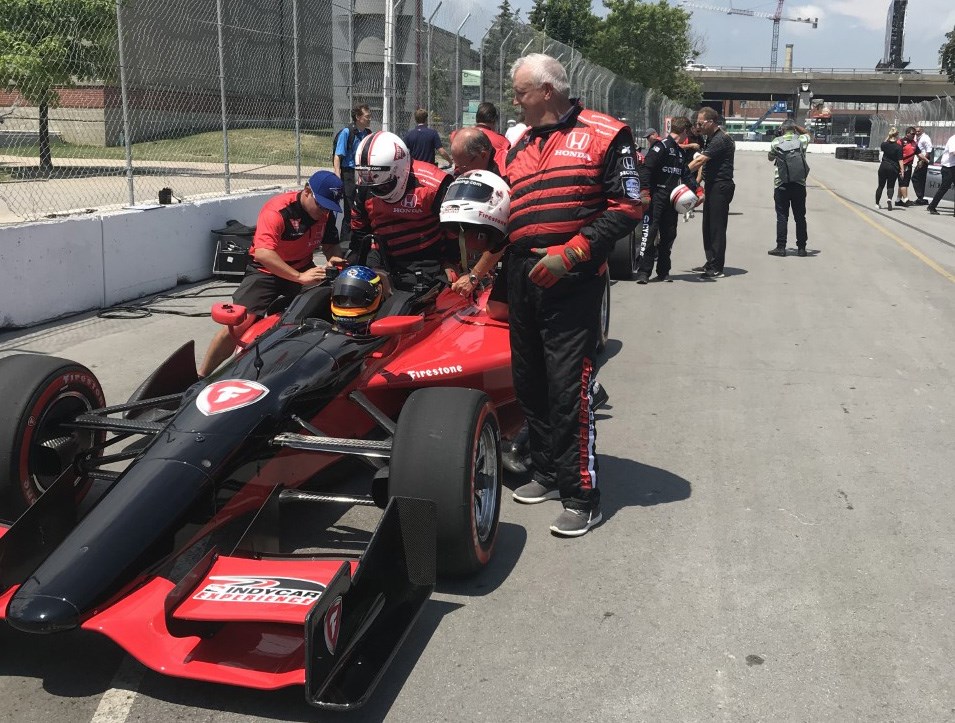 Foothills County resident Norm Castiglione, right, gets ready to take his ride with Kyle Kaiser in an Indy Honda racing car in Toronto July 11. The ride was a gift from his wife purchased at the 2018 Foothills Country Hospice's Rally 4 Hospice.

That wasn’t centrifugal force that had a car buff’s cheeks pulled back when he reached speeds of maybe 200 mph.

It was an ear-to-ear grin.

"I don't know if I could talk or not, I couldn't get the smile off my face," said Foothills County resident Norm Castiglione after taking a lap in an Indy car in Toronto on July 11. "I had this full-mouth grin the whole way, thinking: 'Holy Smokes.'''

Castiglione took about a 3/4-mile road-course lap as a passenger. It was a gift from his wife, purchased at the 2018 Rally 4 Hospice and Gala, a fundraiser for the Foothills Country Hospice.

"My wife thought it would be a real cool thing for me to do and it was," Castiglione said from Toronto. "I drove one lap on the Indy course with the driver (Kyle Kaiser) and I think it was 200-some miles per hour. After driving one lap with him, I realized my capabilities fell far short of being able to drive the car."

He said the Indy car was adjusted to take a passenger, but is identical to the ones that will be driven at the Honda Indy Toronto races July 12-14.

"There are a lot of G-forces on the turns," he said. "I laughed a bit, because I was thinking 'how much faster can this be than driving a fast (non-Indy) Ferrari?'. "Well, a Ferrari is like a golf cart compared to this."

He was surprised how stable the ride was.

"It is just amazing how the tires and the down-force from the wings can keep the car so it doesn't slide," Castiglione said. "I would never enter a turn that fast. He would enter real tight turns at about 70 mph. I was expecting we would move around, but we didn't move one little bit."

It gave him a whole new appreciation for the men and women who are racing cars.

"If they don't have coolers in their suits, I can see them loosing 30 or 40 pounds after a day of racing, it's hot," he said. "These folks are pretty fit."

The Indy car ride got the heart-thumping, but the rally and gala for the Foothills Country Hospice warms the heart.  Last year's rally and gala raised $470,000 for the hospice located just north of Okotoks.

He plans to be at the second annual Rally 4 Hospice again this year, which takes place Aug. 17.

"Our rally is more about having fun," Castiglione said. "I will probably have the Ferrari going again and probably an Astor-Martin, we will see."

The rally goes through the scenic Foothills area and there is a gala at Spruce Meadows in the evening. Entertainment at the gala includes The Duelling Pianos and a live auction by Danny Hooper.

For more information go to www.countryhospice.org