Adam Young’s body has never been found, but it is alleged the Calgary man’s remains were burned in a barrel at a property east of Okotoks over three years ago.
May 3, 2021 12:45 PM By: Darlene Casten 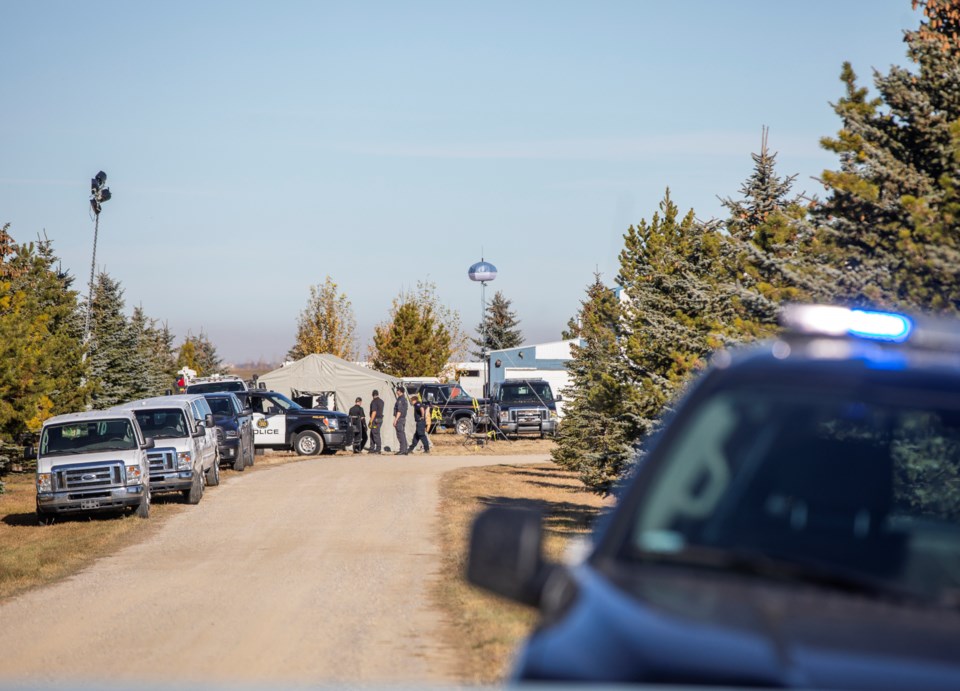 Calgary Police Service set up a mobile command centre at a property off 338 Ave west of Okotoks in Oct. 2018 related to the 2017 disappearance of Calgary man Adam Young after executing search warrants on the acreage. (Brent Calver/Western Wheel File Photo)

Adam Young’s body has never been found and it is alleged the Calgary man’s remains were burned in a barrel at a property east of Okotoks, near Aldersyde, over three years ago.

Young, 35, went missing after being last seen Nov. 20, 2017 leaving his downtown apartment with Jeff Brady. Young’s mother testified her son was addicted to heroin, had been in and out of jail for more than half of his life and had been in the Independent Soldiers gang, but left five years before his death.

Brady and Robert Cudney were arrested and charged with second-degree murder in Young’s death, shortly after a 10-day search in October 2018 by Calgary Police Services of a rural acreage off 338 Avenue and 112 Street East.

In his opening statement Crown prosecutor Shane Parker said their case will show that Brady picked up Young from his downtown apartment in a Chevy Cruz and then picked up Cudney at a nearby gas station. Parker outlined a scenario where Cudney shot Young in the car, which days later was found destroyed by fire near the Calgary airport. After the shooting, Cudney and Brady picked up cleaning supplies and made arrangements to take the body to be burned at the rural property near Aldersyde, Parker told the jury.

Chad Eroshinsky testified Cudney, a friend who supplied him with drugs in exchange for driving him around, called him to tell him he and Brady needed to dispose of a body on the evening of Nov. 20, 2017. He was living in his parent’s basement at the rural property near Aldersyde at the time.

Eroshinsky told the court that when Brady and Cudney arrived, they all went to a workshop on the property and got high on fentanyl and meth. The three men then dragged the body in a tarp to a camper lined with plastic and tarps and Eroshinsky gave Cudney and Brady saws to dismember the body, but they were unable to, Eroshinsky testified.

He said he created a furnace by cutting holes in a burn barrel and used a torch with a 30-lb propane bottle to create a heat source, admitting that he was the only one of the three who knew how to make a furnace because he is a boilermaker.

“I thought of it as a job,” Eroshinsky said. “It’s not something I’m proud of.”

He used boards to block the view of the burn barrel from neighbours, Eroshinsky said in court.

He testified once the body was in the barrel Cudney and Brady left and he manned the furnace for 12 hours until Young’s body was turned to ash.

Eroshinsky told defence lawyer Andrea Serink that Cudney continued to give him drugs and a “small amount” of money for burning Young’s body.

Serink also questioned Eroshinsky on his willingness to cooperate with police in exchange for his father keeping guns found in the home.

“My dad, he’s over 70 and if he got his guns taken away he wouldn’t last much longer,” Eroshinsky said.

Eroshinsky entered into an agreement with the witness protection program that paid for his moving expenses to B.C., but he testified his rental home burned down and they had to leave.

Eroshinsky is not facing any charges in relation to Young’s death.

Cudney’s trial is scheduled for a two week period.