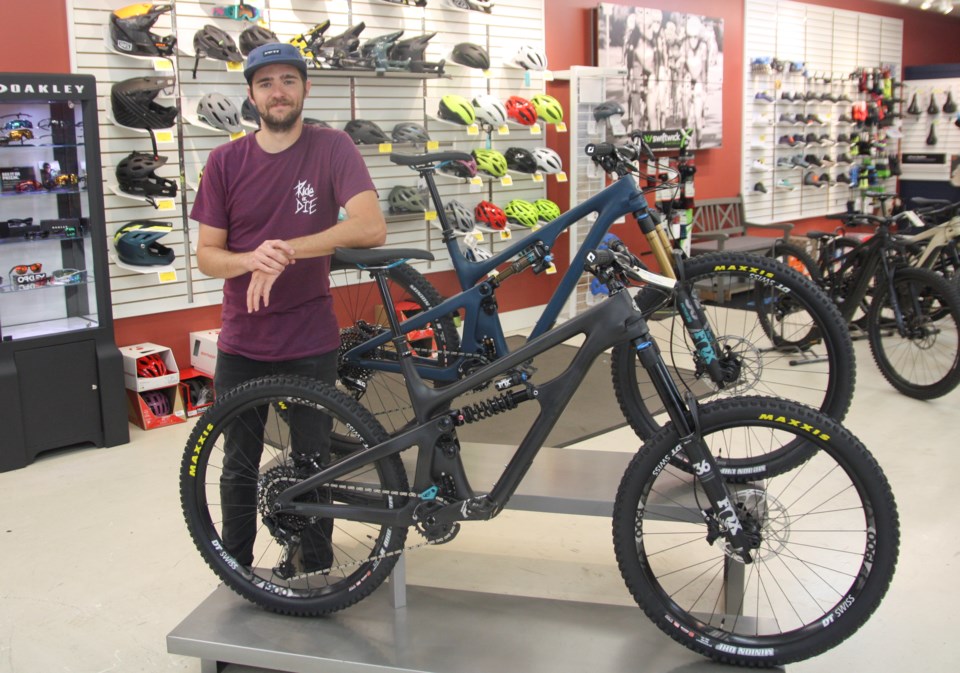 There hasn’t been much in the way of shifting gears for the bicycling business.

If anything, it’s adjusting to an increase in demand with unprecedented sales being experienced at two Okotoks retail locations during the COVID-19 pandemic.

“At the outset when we closed the store entirely for in-store shopping, we were doing curbside delivery and I was doing curbside consultations outside for bikes,” said Carson Bell, sales manager at Ridley’s Cycle Okotoks. “And even doing it that way our numbers are significantly up.

“The last two years have been very strong years and this year is significantly higher to the point where the cheapest bike I have in the store right now is about 4200 bucks.”

The entry-level bikes, those under the $1,500 mark, were sold-out completely and re-orders of the bikes are hard to come due to supply chain issues and retail locations all scrambling to bring in merchandise at the same time, Bell said.

“My showroom floor looks comically barren,” he said with a laugh.

Bell attributed the spike in bike interest to the outdoor activity fitting in nicely in contrast to the restrictions at many recreational facilities along with other factors.

“I think it’s a combo,” Bell said. “My inclination is some people had money they had earmarked for trips which then got cancelled and it’s very limited in what you can do, especially at the outset (of COVID-19) and cycling is an easy activity you can do on your own. There’s no facility required, obviously, you can do it on your own terms. I certainly think that was definitely a big driver.”

And it’s not just the kids bikes and entry-level offerings that are going out the door like gangbusters.

“We have our dedicated customers, dedicated cyclists who are treated it as normal so that would be the high-end bike purchases and that did not slow down either, in fact, that even seems up, we’re talking the bikes that are five-grand to twenty-grand,” he said. “Those are probably up sales-wise as well, which I thought was interesting just with maybe people being a little bit more with money not knowing if they were going to get laid off or go into CERB or whatever the situation may be.”

Wheel Life Cyclery has experienced much of the same demands at its downtown Okotoks location.

“I feel like everyone in the world is using the word unprecedented, but I would say it’s been very unseasonably busy, and we have very few bikes left,” said Wheel Life Cyclery shop manager Mark Selanders.

“But when everything hit I wasn’t expecting to be working 60 hours per week for three months or so.”

At Wheel Life, the sales of the entry-level bikes are at the highest, but that’s not an unusual.

“We’ve definitely sold more entry and mid level bikes than the true high-end stuff,” he said. “But that’s a general statement about sales at any point, anyway.

“I think it’s just growth across all segments that’s been pretty steady.”

What’s been steadily busy at Wheel Life is the demand for service.

Selanders said what’s normally a week turnaround for service is now looking more like two to three weeks out and peaked at five weeks.

“We’ve been one of the only shops that actually stayed with our store-front open the whole time,” he said. “There was one point where we had to close our doors for two weeks just to catch up on service work.

“We’ve seen a lot of bikes that have not seen use in many years that people want to get back on the trail and on the road, which is awesome.”

At Wheel Life, Selanders said the shop is doing its best to accommodate each individual client’s needs.

“We’re lucky in that we’re a very small, local shop and we’ve always been pretty flexible with whatever customers need,” he said. “We’re pretty quick and easy to change gears and with COVID we quickly made a point to make sure we were up to snuff on our cleaning and decontamination.

“And then primarily it’s just been whatever makes a customer happy and feel safe we’re happy to do, whether that’s curbside pick-up, whether that’s bringing bikes out to their vehicle, whether that’s locking the door while they’re here so they can literally have the shop to themselves for a few minutes.”

Over at Ridley’s, the COVID-19 measures in place restrict customers to four in the store at a time, as well as two per household, with one lineup outside for online pickups and another for those who want to come in the location.

“I’ve worked in bike shops since university, so about 13 years, and certainly in my memory this is the craziest it has been compared even to 2018 when we had a record year here,” Bell said. “And we’re significantly blowing by that.

“Working in retail, you’re never sure with a situation like this how it’s going to swing and I bought a house through all this, my first house, so it was somewhat nerve-wracking.

“It turns out we’re one of those industries that seems to have thrived though all of this. It would have been nice if it wasn’t coming at the expense of other industries suffering, but I can’t complain.”