Appeal against building for classes denied

A Millarville area family received the go ahead to build a facility to provide lessons in growing and working with garlic, making soap and blacksmithing after facing opposition from some residents in the area.
0
Aug 8, 2018 12:01 AM By: Bruce Campbell 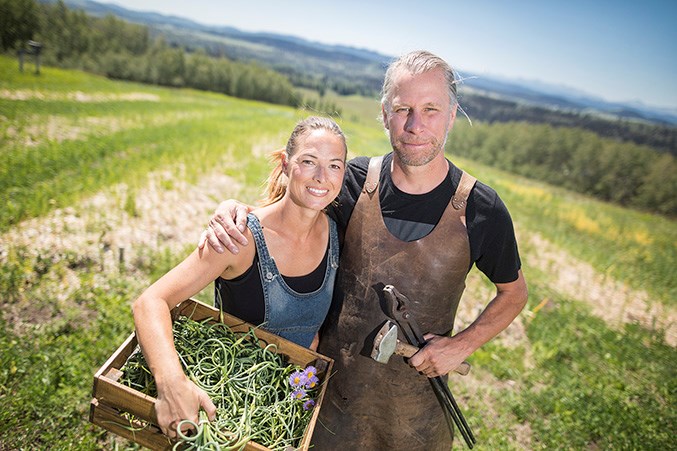 Brent Calver/OWW Cheryl and Jim Greisinger had their application for a minor home occupation and a proposed 2,400 square-foot building to hold “homestead classes” approved after facing opposition at an MD of Foothills development appeal board hearing on July 17.

A Millarville area family received the go ahead to build a facility to provide lessons in growing and working with garlic, making soap and blacksmithing after facing opposition from some residents in the area. The MD of Foothills Subdivision and Development Appeal Board ruled on Aug. 1 against an appeal of Cheryl and James Greisinger’s proposal to build a 2,400 accessory building on their property to host “homestead classes,” which would include garlic braiding, garlic recipes, soap-making, jam-making, blacksmithing and others. “We are so excited,” said James, who runs Stone Wood & Steel on the property. “It is really what we hoped for, it’s going to make things much easier as we move forward.” Approximately 35 people attended an MD of Foothills development appeal board hearing on July 17, including nearby residents who were opposed to the proposal. Suzanne Kallis and her family live near the Greisingers. She told the appeal board she had concerns of increased crime in the Foothills, citing the recent Edouard Maurice incident when he was charged with using a firearm to ward off trespassers at his home just outside of Okotoks. She said at a workshop hosted by MD councillor Suzanne Oel at Priddis earlier this year, a corrections officer told how to decrease crime in a rural area. Kallis told the board the officer said it was important to limit the number of strangers in the area. “This application is asking for people to come to the home business – people that we don’t know and it will increase the number of strangers coming into our area,” Kallis said. “The officer was quite specific that if you want to deter the crime, {do] things like putting up gates to deter strangers from coming into the area.” Kallis said her family addressed her concerns to the Greisingers, telling them they have already had people come down their driveway trying to find the applicants’ current business. She also said there were concerns about increased traffic in the area. The conditions being appealed included restrictions of traffic of “four business related vehicle trips are permitted on any given day. This includes any deliveries to or from the property and any clients attending the property.” In a letter to the board, the Kallises stated the restrictions opened the door to strangers coming to the Millarville area. “If you average two people per car per business, then that is 16 people per day or 496 strangers per month to our community,” the letter stated. At present Cheryl Greisinger grows and dries her own garlic and does hold homestead classes. James runs his artistic blacksmithing and runs classes. They do not sell their product out of their Millarville area home, but at farmers’ markets — including Millarville Farmers’ Market. The building would allow them a better facility to hold classes and to store equipment — and also would be ideal for drying garlic. There are no plans to establish a retail store at their property. Although there were three people who spoke out against the proposal, there were several who spoke in favour of the Greisingers’ efforts. Several of those in MD Foothills council chambers had signs stating: “Farm to Table” and “Support local farmers.” Judy Mackenzie, who lives in the area, scoffed at the notion of “unsavoury” people coming to the Greisingers to attend classes. “As for unsavoury characters, I have never met a garlic consumer that is unsavoury,” said Mackenzie who lives east of the Greisingers, told the board. “I personally have enjoyed Cheryl’s produce. I do not go to Cheryl’s house to get her product, I get it at the Millarville Market.” Laura Ball, who regularly rides horses in the area, said traffic does not seem to be an issue due to the Greisingers’ business. “I haven’t noticed any vehicles going by,” she said. The appeal board approved the Greisingers’ proposal. In its ruling it stated the “minor home occupation is primarily agricultural in nature, operations will be relatively unobtrusive to surrounding landowners… In conclusion, the board found that the application as presented would not unduly interfere with the amenities of the neighbourhood, or materially interfere with or affect the use, enjoyment or value of neighbouring parcels of land.” The Greisingers now want to make up for lost time due to the appeal process. “Now we are going to promote our classes as much as possible,” Cheryl said. “We are just coming up on garlic harvest time, so we will be busy with getting that out of the ground and cured.” The Greisingers have used an old barn they resurrected for the past nine years. “Now we can build the proper, typical building that would facilitate the proper storage of a tractor for example,” James said on Aug. 1. “That’s all we really wanted to do. There was a glimmer of profitability and growth but the most important thing was we were at home with our kids as opposed to Cheryl commuting to downtown Calgary.”