Sending radio signals across North America was enough for a group of amateur radio operators to chalk up points in a continent-wide competition.
Jul 1, 2015 12:00 AM By: Okotoks Western Wheel Staff 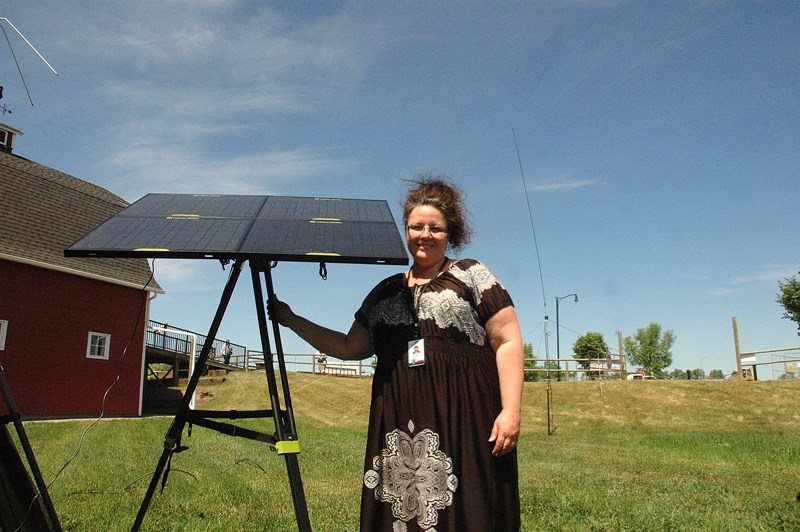 Calgary amateur radio operator Ginette Houle prepares to send out a message during the 2015 Field Day, sponsored by the American Amateur Radio League, in High River on June 27.

Sending radio signals across North America was enough for a group of amateur radio operators to chalk up points in a continent-wide competition.

Radio operators from the Foothills, Calgary and southern Alberta pitched their antennas and radio systems in the Sheppard Family park in High River on June 27-18 for the 2015 Field Day, sponsored by the American Amateur Radio League.

It’s an annual competition where amateur radio operators across the continent compete, either individually or in groups, to see whoever can contact the most people at the greatest distances.

“We are now competing against other stations to try and contact as many other stations around the world as we can,” said Vince d’Eon, Foothills Amateur Radio Society member.

During the competition, operators located in High River contacted others across North America, on both the Pacific and Atlantic coasts. d’Eon said one was able to bounce a signal off the International Space Station.

However, radio operators had to deal with residual affects of a large solar flare and solar storm last week, which affected radio signals.

“That hampers our ability to transmit a signal far around the world,” said d’Eon. “So everybody’s equally handicapped by those sorts of events.”

He said there are three variables that ultimately determine how far radio operators can contact signals: time of day, radio frequency and distance.

d’Eon said it’s possible to reach people halfway around the world with some of the radio systems the operators in High River were using. Talking to someone a “short distance” away in southern California is like a simple phone call, he said.

The competition requires radio operators to set up under adverse conditions, such as operating without a power source. In High River, this meant radio operators used generators or solar panels. Operators competing in High River this weekend were set up in tents, trailers or had antennas attached to their cars.

The more adverse the conditions, the more points are available.

“We can’t operate form home, or if we operate from home we don’t get as many points,” he said.

d’Eon said this makes the competition is good practice for when a real emergency strikes.

“This is exactly a training operation,” he said.

d’Eon was preparing for the annual contest in 2013 when floodwater ravaged High River, but ended up being called into service to provide a vital communications link in the town after the disaster.

Phone service was down in High River and there was no cellular phone service in the town after the flood.

d’Eon was part of a team of Foothills amateur radio operators called in to provide communications services in High River, Blackie, Heritage Pointe, Nanton and at an emergency operations centre at the South Calgary Hospital.

“Two years ago I was leading the 55 people that supported the Town of High River,” he said. “We had people in Edmonton, we had people in Red Deer supporting the provincial network link that kept High River in touch with provincial government, which got them the really vital aid they needed.”

Radio operators provided much of the hardware and radio technology that allowed people responding to the flood to remain in communication with people outside the Town.

d’Eon said they were able to provide the simple and essential ability to carry messages in and out of High River after the flood.

“The first thing to fail in a conventional emergency are infrastructures, water, sewer, telephone lines, the Internet, cellular towers,” he said. “We provide that really vital communications gap when those systems fail because our networks are independent of those systems. We have our own infrastructure.”

d’Eon said radios are ideal for communications during emergencies, compared to alternatives like cell phones or even satellite phones. He said cell phone service can be knocked out when cellular towers are out of service. Cell phones and satellite phones don’t always work in underground locations, but wireless radios do.

This is precisely what attracted Calgarian Ginette Houle to amateur radios and her first time competing in the Field Day.

She has lived through disasters in the past, including a 1979 train derailment in Mississauga and a massive power outage that affected much of eastern Canada in 2002. After the 2013 flood, she felt she should learn about amateur radios.

Houle said she is still learning after first getting into amateur radios about a year-and-a-half- ago, but she is well prepared.

During the competition, Houle had two antennas, one for high frequency HF frequencies and a dual-band antenna for UHF and VHF frequencies.

She also uses a “go box” (a self-contained box with her radio equipment in one unit), a laptop and a solar powered battery pack.

She said the ability to communicate is a basic necessity when disaster strikes.