An Okotoks toddler has found an old new friend during the first couple of months of school.
Nov 28, 2018 12:47 AM By: Bruce Campbell 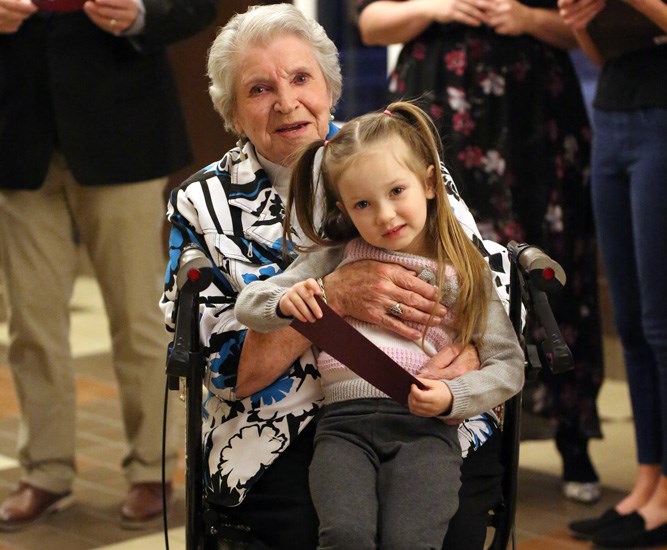 Tudor Manor resident Ada Parsons, 86, shares a moment with her new friend Fiona Penhalagan, 3, at the Nov. 22 opening ceremonies of the VIK Academy, a French Immersion early learning and childcare centre, which is located in the senior facility in Okotoks.

An Okotoks toddler has found an old new friend during the first couple of months of school. Fiona Penhalagan, 3, was sitting on 86-year-old Ada Parsons’ lap, during the opening ceremonies on Thursday of the VIK Academy, a French Immersion early learning and childcare centre, which opened at Tudor Manor, a supportive living facility for seniors in Okotoks. The academy is just off the main entrance of the seniors’ facility and every Thursday students go to a recreation area to do crafts and hang with the Tudor residents. Fiona gave thumbs up when asked how she likes doing crafts. The seniors helped the youngsters make snow-globes on Thursday. Her mom, Holly, enjoys having the intergenerational aspect. “The intergenerational part is always fun,” she said. “It helps them connect (with seniors) better.” Dad Ian agreed. “They (the children) have to learn that people are going to age,” Ian said. “They can learn a lot from the seniors – they didn’t have iPads and things. I am sure the elderly can really influence them with stories and stuff like that.” The children help keep Parsons, in the words of fellow senior citizen Bob Dylan, Forever Young. “It helps me forget that I am 86 years old,” said Ada, who has lived at Tudor Manor for 2-1/2 years. “The kids and the whole Tudor Manor play such a big part for me now. “I feel like all my brothers and sisters are around me again. This little one [Fiona] said to me. ‘I know your name, you’re Ada.’ “That just tells me something.” It’s a win-win situation, according to Brenda Carroll, the administrator at Tudor Manor. “When you see our residents light up when the children come out to do reading programs… it gives our seniors an extra sense of purpose,” Carroll said. “Instead of the kids reading with their teachers in the classroom, they are sitting in lounge chairs reading with the seniors. “There is a real sense of vitality with having children in the building. From an age perspective, we are trying to break down some of the stereotypes that kids have in respect to seniors and aging individuals…. These kids are just going to learn they (seniors) are part of every day life.” That old adage children should be seen and not heard goes out the window at Tudor Manor. There are waves of hello between the children and seniors when academy students are going to the playground. Carroll said while there are other daycare facilities in Alberta at senior centres, she believes this is the lone one with an intergenerational component. The children are not just in Tudor Manor, they are part of Tudor Manor. “The unique piece with us is it is intergenerational programming,” Carroll said. “We plan to have the seniors and the children from the daycare do joint activities, field trips and really build those bridges between the generations.” Carroll sits on the daycare board with the purpose to promote intergenerational programs. The founder of VIK Academy said the partnership has been a successful one since the daycare facility opened at Tudor Manor in September. “The intergenerational program is a lot about the quality of living for the seniors and the emergence of social emotional skills in the young children,” said Julie Errmann, VIK Academy CEO and founder. “The little children, they get to develop the empathy to connect with the older generation.” It’s only been two months, but Errmann already sees successes. “When we were registering families, they were really excited about that part of the program,” she said. “We see the students seeking the seniors when they go upstairs and the seniors seeking them, networking with them on a casual basis.” The opening ceremonies were attended by lifetime teacher Mayor Bill Robertson. Members of the Brenda Strafford Foundation board also were at the ceremonies. Tudor Manor is part of the Brenda Strafford Foundation, which provides various levels of care for seniors.