A peek inside the honeybee hive

There’s more to bees than stingers and honey. People have become fascinated by the small pollinating insects in recent years, particularly due to news of hive collapse and disease among bees.
Aug 15, 2018 6:00 AM By: Krista Conrad 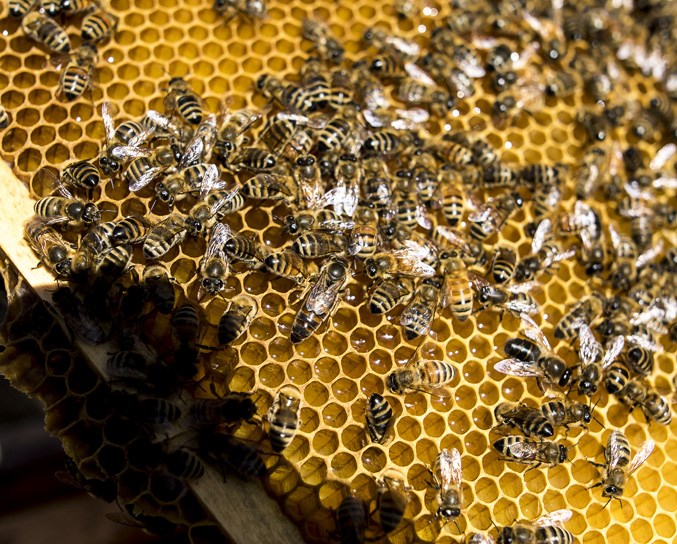 Chinook Honey Company invites the public to learn more about bees and how hives work in sessions run Thursday through Sunday in the summer.

There’s more to bees than stingers and honey. People have become fascinated by the small pollinating insects in recent years, particularly due to news of hive collapse and disease among bees. More than 30 people came out to the Chinook Honey Company’s Bee Basics seminar on Aug. 9 to learn a little more about the winged creatures. “It was a family outing, and it was chosen for us by my son’s girlfriend, but I’m glad she did because I found it really interesting,” said tour attendee Valerie Bowen. Her eyes were opened when she learned all bees have specific jobs within the hive. It was the same for Lorraine Burd, who said everything she heard over the 45-minute session was new to her, especially the fact bees are such intelligent beings. “How smart they are and how they’ve each got a job, and they know what it is, and they know where they need to be, that just fascinates me,” said Burd, who had brought her 94-year-old mother out for the day. “I won’t swat one away so quickly next time. The wasps I’ll still swat.” The session opened with tour guide Katie Duval explaining the difference between the three most common species in the Foothills region: wasps, honeybees and bumblebees. “The wasp doesn’t have much hair on its body so they don’t help us with pollination that much, but they do eat mosquitoes for us, so that’s one good thing they’ve got going for them,” she said. There’s also a difference in the stinger. Wasps have a smooth stinger they can use multiple times so they don’t hesitate to attack, she said. Bees, on the other hand, die when they use their stingers, which will usually pull out part of their abdomens to continue injecting the victim with venom after the sting. They use it sparingly and are generally gentle insects, she said. “Honeybees and bumblebees are very friendly,” said Duval. “They only care about the flowers outside, they don’t care about whatever we’re doing. They’re just looking for pollen and nectar.” There are three types of bees in the honeybee hive – the queen, worker bees, and drones. There will only ever be one queen, she said. One beekeeper’s hive can hold upwards of 60,000 bees but there would still only be one queen, she said. Each queen lives for three to five years, and in that time she will lay up to 2,000 eggs per day, every day – after mating only once with four or five drones in her first spring. “She’ll go around the cells and see if they’re clean enough, and if the cell is clean then she’ll insert her whole abdomen into the cell and lay a single egg,” said Duval. After 21 days a worker bee will emerge from the cell. It takes about 25 days to create a drone and a new queen will form in 15 days, she said. A queen is made by feeding an egg differently. Most larvae and pupa are fed “bee bread” – a high-protein mixture of pollen and nectar – but queen bee eggs will be fed royal jelly, the same milky substance the queen herself eats. New queens are created when the old queen is beginning to die or if she has chosen to swarm and has left the hive with half the bees, she said. At that time, four or five female eggs are fed royal jelly. “Whoever is the first to emerge from her cell will be the new queen, and she will take her smooth stinger (like a wasp’s) and sting and kill the other queen cells so she’s the only living one,” said Duval. “If two come out at the same time, they will actually fight to the death to see who is the stronger queen to lead the hive.” The rest of the bees all have their own jobs to keep the hive running, she said. Workers can be queen’s attendants, nurse bees who feed larvae and care for the sick, housecleaning bees that make sure cells are ready for new eggs, carpenter bees that build the wax honeycomb, and honey-making bees. “They have a second stomach, so when they bring in nectar they’ll put it in their honey stomach and churn it all around,” said Duval. “It mixes with some chemicals as well, and then they’ll spit the honey into a cell. So honey is actually bee spit.” Older worker bees will fly away from the hive to seek sources of pollen and nectar. They communicate locations of flowers with the “waggle dance.” Wiggling their abdomens indicates the distance from the hive, and walking at a certain angle tells the direction from the hive in relation to the sun, she said. “I think that’s one of the best features about them,” said Duval. Drones, the male bees, make up only about five to 10 per cent of the population and their sole purpose is to fly out in the spring and mate with virgin queen bees from other hives. They are left outside to die in the fall, so there are no drones in the hive over the winter, she said. To ensure hives have enough food resources, Duval said people should keep their dandelions, because they are the first food source for bees in the spring. Chinook Honey Company co-owner Cherie Andrews said Bee Basics has been running for about 14 years, though it was originally a tour given only to school classes. “Eventually we had people asking for a drop-in option,” said Andrews. “I think really it’s been about huge curiosity about honey bees. People are interested.” Bee Basics runs at 2 p.m. every Thursday and Friday in the summer, Saturdays at 11 a.m. and 2 p.m. and Sundays at 1 p.m. and 3 p.m. The cost is $10 per adult, $7.50 for seniors and children age three and older. For more information visit www.chinookhoney.com