Okotoks Junior High School is inviting the public to its production of The Lion, the Witch and the Wardrobe on Feb. 7 and 8.
Feb 1, 2020 12:45 PM By: Tammy Rollie 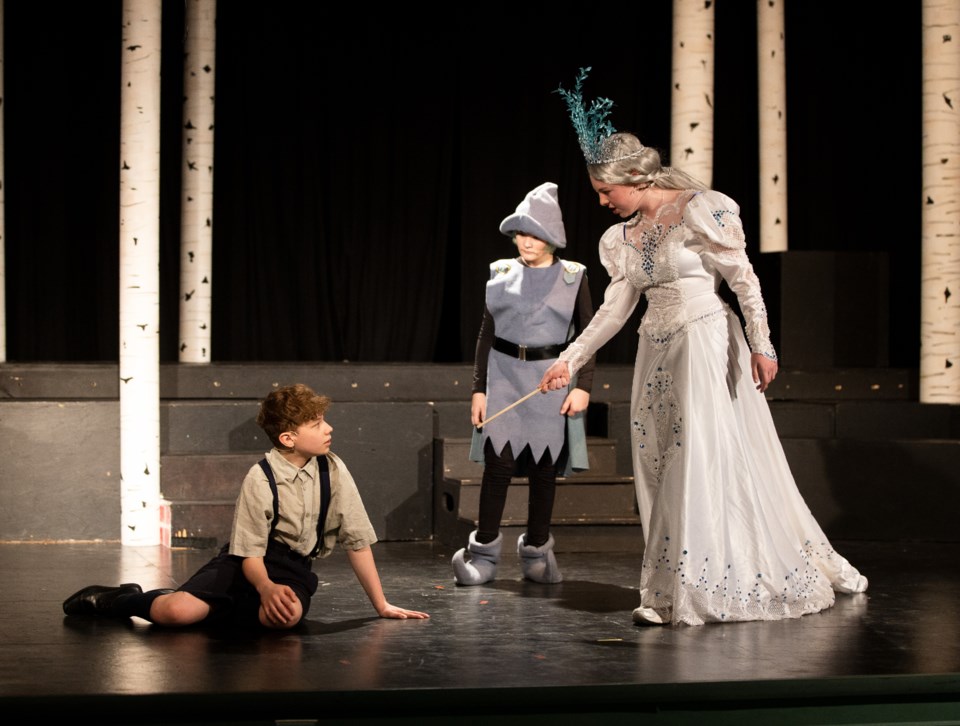 Dallas Cunningham (playing Edmund) encounters Samantha Langenberger (playing the White Witch) and Brady Bellend (playing the Dwarf) during a rehearsal for 'The Lion, the Witch and the Wardrobe' at Okotoks Junior High School on on Jan. 30. (Brent Calver/Western Wheel)

Two dozen youths are becoming experts at pretending as they prepare to enter the make-believe world of Narnia next week.

Okotoks Junior High School invites the public to its production of The Lion, the Witch and the Wardrobe Feb. 7 and 8 where students will perform the popular fantasy that tells the story of four siblings travelling through a wardrobe to Narnia, a land of talking animals and mythical creatures.

Grade 8 student Eve Shepherd had to curb her lively personality a bit to fit into the role of the curious, but lady-like, Lucy.

“I had to get into it and practice a little bit and figure out how to be calmer,” he said. “At home I practised the scene of drinking tea with Tumnus. I would sit at the table and drink tea like her so that helped me out.”

To really understand Lucy, Shepherd said she asked others who they felt Lucy was and came up with her own version using their suggestions.

“I wanted to get in the role and figure out who she was, how she acts,” she said. “Lucy is very curious and can be quite quirky.”

Shepherd is entering the role with experience acting in last year’s Alice Through the Looking Glass, where she played multiple roles – some with lines - as well as in plays at Percy Pegler Elementary School.

She said Lucy was the character she’d hoped for from the beginning.

“That was the one role I wanted,” she said. “I wanted to jump in and get a bigger role. I really like acting and getting to be someone different.”

Alex Perkins, although only in his first year at OJ, had also hoped for a major role and got it when he was cast as Peter, Lucy’s eldest brother.

Unlike Shepherd, Perkins said he can relate to Peter and has a lot in common with him.

“I didn’t have to change much to fit this role,” he said, describing Peter as kind, confident and a good leader.

Also similar to Peter, Perkins is a big brother.

“I have a dramatic younger sister,” he admitted. “Being a big brother helped me through the entire thing. Edmund is a bit of a pain and doesn’t listen. He has no initiative to do anything and wants things to go how he wants.”

While Grade 8 student Eden Hick doesn’t have younger siblings to contend with on stage, she has her own challenges to face playing the role of the great lion Aslan.

“I have a huge lion head and my understudy is behind me and someone is working the body,” she said of the puppet costume. “Sometimes I don’t know when people are around me because I don’t have much peripheral vision. My understudy helps me a lot and I’ve memorized where to move on stage.”

Hick said she doesn’t mind playing  the Lion, not just because she doesn’t have to wear stage make-up but because she wanted to play a larger role after playing Tweedle Dum in Alice Through the Looking Glass last year.

“Aslan is in charge and is the boss of everyone,” she said. “He’s kind of like me. I like being in charge, but I’m not all-knowing.”

Drama teacher Charmaine Ferguson said she picked the script to give more students a chance to shine on stage.

“It has lots of medium-sized roles so a lot of kids get to be featured and have quite a few lines instead of having one or two main roles and having stars,” she said.

Ferguson was faced with a younger cast, with only three Grade 9 students.

“We had a lot of Grade 7s try out this year,” she said. “I think that means our program is evolving. There are more and more kids who are excited to come out and audition for the play every year, which is great.”

Ferguson said she likes to have a good mix of grades and get younger students started early so by the time they’re in Grade 9 they’re strong actors.

With the performance just days away, Ferguson said everything is wrapping up nicely.

“We’re in our last push here,” she said. “They really pulled it together in the last week or so.”

Tickets to see The Lion, the Witch and the Wardrobe cost $10 for adults and $5 for students and can be purchased at the school office or at the door. Money raised from ticket sales and the concession help pay for next year’s script, costumes, sets, props and equipment.