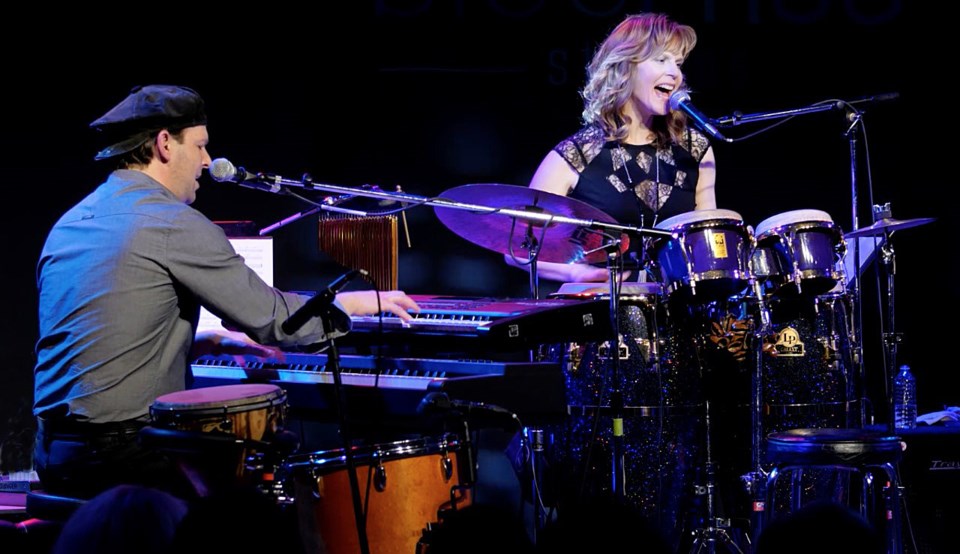 Vancouver couple Kristian Alexandrov and Shannon Gaye will kick off the On the Edge Concert Series with a performance Oct. 18 at the Red Deer Lake United Church.

A Vancouver couple that puts a whole new twist on soul, jazz and rhythm and blues is bringing their musical creativity to the Foothills.

Shannon Gaye and the Kristian Alexandrov Trio is kicking off the On The Edge Concert Series season with a dynamic evening of music at the Red Deer Lake United Church Oct. 18 at 7:30 p.m.

“It’s my original music as well as Shannon’s original music,” said Alexandrov. “We mix in some well-known tunes and some popular tunes as well. We have a band that’s extremely versatile.”

The couple will be joined by Calgary musicians Jeremy Coates, on bass, and Tyler Hornby, on drums.

“I went to school with them,” said Alexandrov, a composer, performer, producer, musical director and clinician. “I’ve been playing with them for over 20 years when we lived in Calgary.”

Alexandrov, who was born and raised in Bulgaria and grew up in a family of musicians before moving to Canada in 1995, said he and Gaye return to Calgary to play once a year. This will be their first performance in the Foothills.

“Phil (Jackson, On the Edge Concert Series organizer) saw us play at the National Music Centre and he came up to us and wanted us to be a part of the concert series,” said Alexandrov. “He explained that he’s got a great audience and an amazing venue and that was a no brainer for us. Any time people are in a room sitting quietly listening to our music is a treat.”

Alexandrov and Gaye complement each other musically with Alexandrov’s gift at classical piano and Gaye’s soulful voice and percussion skills.

“We have great natural chemistry because we’re a couple, but that’s not the main reason,” said Gaye. “We complement one another’s styles. It’s a unique hybrid where we get to explore the different strengths that we have. What we do is explore the way that they’re related.”

The British Columbia native said she and Alexandrov collaborate well in writing music.

“I’ll come up with a melody and lyric and a rough idea of what I’d like to hear and then we sit down and flesh it out together,” she said. “I’m constantly making notes of everything that I hear that grabs my attention. I like to sit down and have a catch phrase and start working from there.”

While Gaye has a self-admitted adoration for love songs, she said she and Alexandrov go beyond that in their music.

“I like it to have some kind of a story, something to think about after you’ve heard it,” she said. “It’s an organic approach. It’s not calculated. We go in with a concept.”

The sound that results from the couple’s songwriting is a derivative of both of their personalities, said Gaye.

“Your own essence comes through and that’s what makes it unique,” she said. “I think people like the intimacy of the experience, the chemistry that happens with people on stage together. Because we’ve performed together we know each other really well.”

In addition to offering original songs, Gaye and Alexandrov select cover music that complements their writings, but put their own unique spin on it.

“Our hope is people actually like music they didn’t even think they liked,” said Gaye.

“It makes for a different event for people. It gives the audience a chance to see something they might not otherwise see.”

On stage, the dynamic duo is interactive, connecting with each other and the audience as they share the history and ideas behind the songs they sing.

“We’re pretty comfortable on stage together,” said Gaye. “We certainly know each other well enough and have things to talk about through each tune. If we’re doing cover tunes we’ll explain why we chose it.”

Gaye has recorded five solo albums and is a featured vocalist on several others.

Tickets to see Shannon Gaye and the Kristian Alexandrov Trio perform cost $25 for adults, $10 for teens and are free for children ages 12 and under. Purchase your tickets by calling 403-256-3181 or going online to www.reddeerlakeuc.com