Tinkerbell ready to steal the show

A DeWinton actress donning a pirate hat and leather boots is bringing magic and humour to Foothills families.
0
Nov 28, 2018 12:35 AM By: Tammy Rollie 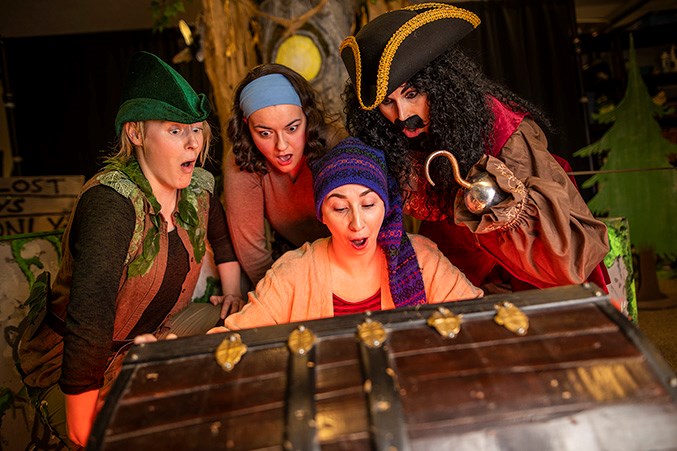 A DeWinton actress donning a pirate hat and leather boots is bringing magic and humour to Foothills families. Samantha Bell is Captain Hook in Goodger-Pink Family Theatre’s pantomime Peter Pan & the Fairy’s Tale: Tinkerbell’s Return with four evening shows and six matinees at the Rotary Performing Arts Centre in Okotoks the next three weeks. “I’ve played a lot of characters in the past but this has got to be one of my favourite ones,” said Bell, Goodger-Pink founder. “There’s something about playing the villain that’s so much fun. “Because it’s children’s theatre and it’s a pantomime he’s silly and hilarious in his villainy.” Hook has made a few public appearances since performing in a Peter Pan pantomime a year ago - most recently at last month’s Enchanted Okotoks event. “I feel so comfortable as Captain Hook - he’s so much fun,” said Bell. “He’s so silly and thinks he’s so great, but he often does things that prove he’s not so great. People have a love-hate relationship with a character like that.” The Christmas pantomime is a sequel to last year’s Peter Pan adventure, which excluded the presence of Tinkerbell, said Bell. “Tinkerbell is getting back at them for leaving her out of the last adventure by taking them on a crazy quest,” she said. “The dynamic for this one is super fun. With Tinkerbell leading them on a brand new adventure she’s forcing them to work together in groups they wouldn’t usually.” Unlike past performances where the magic starts on the stage, Bell said Goodger-Pink has something new in store for audiences this year. “As soon as they walk into the building they’re in the world of the play,” she said. “Even before they enter the theatre there will be set pieces and props that are going to make the children feel like they’re in Neverland. We’re stepping up the magic and adventure. We want kids to walk into the building and feel like they’re in Neverland like the rest of the characters.” When the pantomime begins, Bell said the magic continues with audience interaction and sword-fighting. “We’ve got lots of sword-fighting and physicality in this play, which is fun for the kids,” she said. “We’re always encouraging them to boo the bad guy and cheer on the good guy. We try to get the children involved and engaged as much as possible.” Goodger-Pink puts on two plays in British pantomime style annually. It’s a love of Bell’s that began while living in the United Kingdom as a child. “That was a tradition that was so special for us as a family,” she said. “Christmas is not Christmas unless you go and see a pantomime.” Bell strived to bring that to Okotoks stages. “It allows children to get really involved in the experience,” she said. “It’s very well received and well liked so we thought we’d just keep going with it. Around the Christmas season you’re always looking for things to do with family.” As for Peter Pan, Bell said it’s a favourite for many people. “Peter Pan was our first year that we’ve ever completely sold out a show,” she said. “I think it had to do with Peter Pan lending itself to a lot of physicality and with Wendy being a really strong female character. It’s really nice for young girls to see a female character embodying so much power and confidence.” The sequel will be filled with its share of magic and adventure, said Bell. “It’s something we really tried to step up this year - a lot of it has to do with sound and lighting,” she said. “We’re making it a more immersive experience. We also have comedy hidden in there for adults to enjoy.” Bell will be joined by Calgary actresses Kelly Malcolm as Peter Pan, Natalie Buckley as Smee and Jessica Parker as Wendy. To make the play financially accessible, the Nov. 29 opening show at 7 p.m. will cost $5 per person. Performances also take place Nov. 30, Dec. 7 and Dec. 14 at 7 p.m. with matinees at 11 a.m. on Dec. 8 and Dec. 15 and at 2 p.m. on Dec. 2, Dec. 8, Dec. 9 and Dec. 16. Tickets cost $15 for adults and $10 for children and can be purchased at okotoks.ca, the Okotoks Art Gallery or by calling 403-938-3204.