With clipboard in hand, a Strathcona-Tweedsmuir School senior is often amid a crowd of teens answering questions and giving direction as they put the finishing touches on the private school’s fall musical.
0
Nov 28, 2018 12:31 AM By: Tammy Rollie 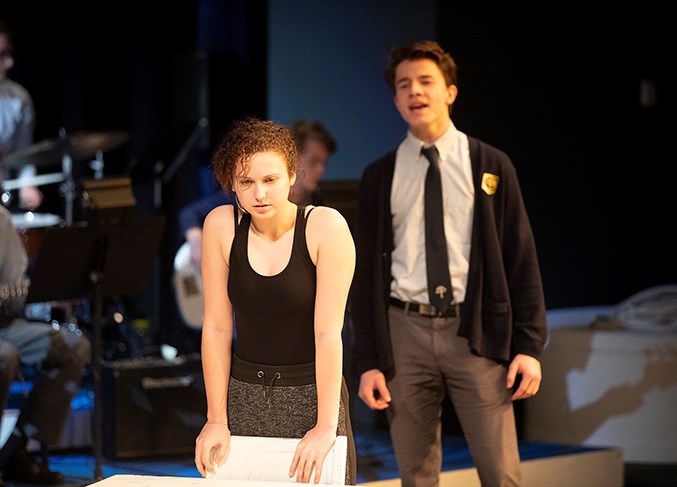 With clipboard in hand, a Strathcona-Tweedsmuir School senior is often amid a crowd of teens answering questions and giving direction as they put the finishing touches on the private school’s fall musical. As stage manager for the musical Mamma Mia!, Grade 12 student Maya Wilkinson serves as the source of information for students in many capacities from rehearsal schedules and scenes to lighting and sound cues. Performances begin in the school theatre Nov. 28. “I have to know the play inside and out,” she said. “I need to stay organized. I need to have it all written in the book we call The Bible. There’s a lot of pressure on my shoulders. If I call a lighting cue wrong and it screws up, everyone sees it.” Despite the immense pressure on Wilkinson this week, this is exactly where she wanted to be. “I prefer to be backstage and I’ve always liked being in charge,” she said. “I’m more personal with the show. I get to know everybody – the actors, stage crew, sound crew, lighting technician, everybody.” Since September, Wilkinson has kept busy scheduling rehearsals, recording directions from the director, calling the show, instructing the technician for the next cue and knowing every aspect of the play. “I could probably say every line,” she said. “I know if they mess up the line or blocking. I become more critical of the show.” Wilkinson has had front row seats to every aspect of the play as it progressed from the beginning stages in September. “It’s so satisfying to see an actor get something right and it all come together,” she said. “It’s nice to finally see full acts come together. There are still things that need to be worked out.” Wilkinson got a taste of the role while serving as assistant manager for last year’s musical Les Misérables – her first experience with a musical. “Last year I got a lot of help from Mr. (Daniel) Hall,” she said about of one of the play’s directors. “He told me everything I would need to know and need to do.” The upcoming graduate also enlisted the help of the Internet – Google specifically. “There’s a YouTube video for everything,” she said. “You can get people who have been stage managers on Broadway give you tips.” Unlike Wilkinson, Grade 12 student Zasha Rabie came into to the musical with years of experience. Rabie plays Donna Sheridan, the lead role. “It’s such a beautiful role and there’s such an amazing emotional trajectory to it because the music is just incredible,” she said. “The show is so fun and the songs are absolutely legendary. It’s incredible to be part of something I know the audience will enjoy and to be part of it with a talented group is so special.” The Okotokian has been performing on stage through various Calgary theatre groups from a young age. She is performing in The Show Company’s fall performance Let it Show and was selected for the Broadway Dreams NYC Showcase in New York City this year. Rabie is also in the midst of applying to universities across North America with hopes to pursue musical theatre at the post secondary level. “This is really important to me because it’s my last high school show before I enter the big bad world,” she said. “It’s so much fun to be able to in my Grade 12 year and do such a fun piece and enjoy myself in a different way than the challenge Les Misérables was.” Rabie said the fun-loving Mamma Mia! is a stark contrast to last year’s musical. “It’s this heartfelt beautiful story of love and finding yourself in a brilliantly funny musical comedy,” she said. “They have these absolutely loveable characters singing great songs and telling you a wonderful story.” For director Katrina Tashlikowisch, this is her first year at Strathcona-Tweedsmuir, with 19 years of teaching drama. “Being new to a school has its own set of challenges to get something like this up,” she said. “I’m not familiar with the space or the kids and I went from an 80 seat theatre to a 600 seat theatre. It’s nice to continue learning how to do things differently and challenge yourself as a director.” With the musical being so new, Tashlikowisch said the school is one of the first to bring it on stage. “The play was just released a week before we chose it,” she said. “If you’ve only seen the movie you’ll be happily surprised by it. The parents are very familiar with the music and they really love the songs. It’s a good choice for them. It’s old music for the students but the kids find value in it, too.” The musical boasts a cast and crew of 80 students, many whom have other school commitments. “It’s a testament to their desire to make the school a great place because they’re invested in trying to put together something that’s significantly challenging in a short period of time and want it to look good,” she said. “For some of them it’s their first experience with something like this.” Performances take place Nov. 28 to Dec. 1 at 7 p.m. and Dec. 1 at 2 p.m. Tickets cost $18 and are available at sts.ab.ca or at the door.