The band of young artists attributes their success to the support of fans in the Foothills and Calgary areas.
Sep 24, 2019 9:30 AM By: Tammy Rollie 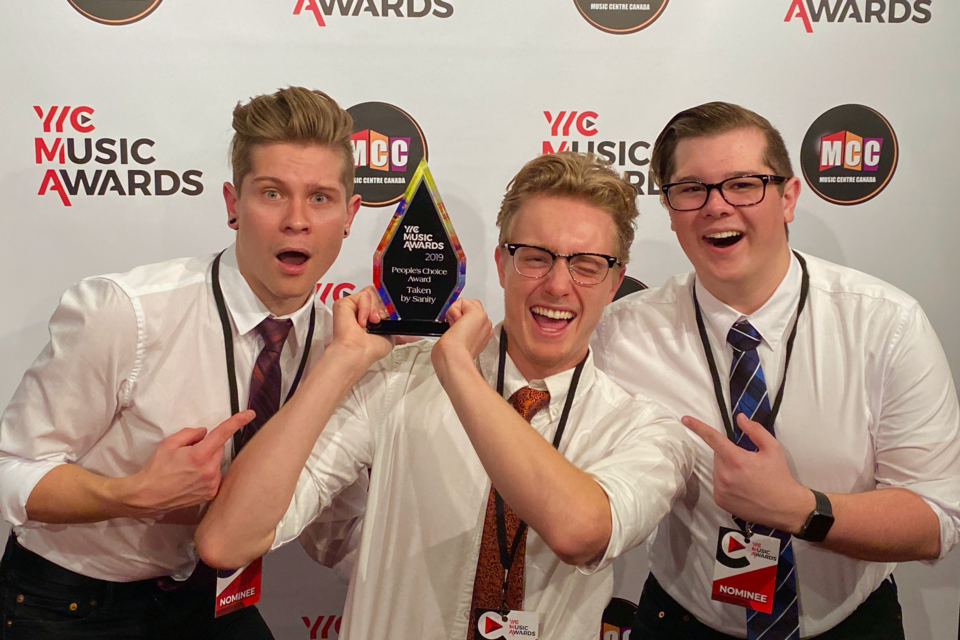 A lead singer in Bragg Creek and his two bandmates are all smiles after the trio snagged an award in Calgary Sunday.

Taken by Sanity’s Jonah Morris and brothers Blaine and Blair Stillman earned the YYC Music Award’s People’s Choice Award for their single Sleepwalker during a gala at The Palace Theatre Sept. 22. The band was also nominated for the Zackariah and the Profits Memorial Award.

“It was just incredible,” said 19-year-old Morris. “I was so shocked. I said the word ‘amazing’ four separate times in my opening sentence because my heart was pounding so fast.”

The YYC Music Awards celebrates the wide range of talent in the area’s music community.

The fan base for Taken by Sanity has grown rapidly - particularly following the release of the band's first album, City of Contrast, in June.

“It’s pretty crazy to think that something we’ve done in our basement won us an award,” said Morris. “I’m so genuinely grateful for that opportunity. It was the coolest experience ever.”

Morris attributes the win to the fans, family and friends in their local communities who voted for them.

“We just have the most amazing fan base,” he said. “We are so grateful to have such amazing communities supporting us.”

The trio got together initially three years ago when the instrumental group, The Stillman Brothers, consisting of Blaine and Blair, were looking for a vocalist to expand their sound.

“A friend of a friend of theirs came across a video of mine on Youtube and these guys contacted me,” said Morris. “We went over some songs together and learned we had a similar taste in music. We practised some of their songs and we immediately got along super great.”

The trio focused on alternative pop and some disco, influenced by such bands as Fall Out Boy and Stone Temple Pilots.

They were soon sought after in the Foothills, playing for the Okotoks Food Bank Christmas Concert, Suntree Music Festival and Black Diamond Music Festival, as well as events in the Calgary area.

Blaine, 21, who lives in Chestermere, said he was honoured that Taken by Sanity was nominated for both awards.

“We just went into it not really expecting too much,” he said. “When we saw the announcements and all the people that were nominated we were generally so shocked that we got listed for two of the awards.”

Blaine said Taken by Sanity has something new up its sleeve for fans next year.

“We have so many great projects coming up it’s going to be very much outside of the box that we’ve never done before,” he said. “We hope people are ready because next year is going to be an amazing year.”

Twenty-year-old Blair, who lives in Calgary, said the trio writes whatever comes to mind, building off ideas they have whether it’s a small melody or chord progression.

Writing and performing has been particularly therapeutic for Blair.

“This year with City of Contrast, performing with my brothers - as I like to consider them - and having our fan base cheering us on has really helped me with my mental health,” he said. “I have a very severe cast of post-traumatic stress disorder. It’s helped me get out of the house and out in front of people, stepping out of my comfort zone.”

Also nominated for YYC Music Awards were Black Diamond’s Jake Vance for Music Video of the Year and Pop Recording of the Year for his song White Lights, and Okotokian Kelsey Raine for People’s Choice Awards for her song Hold On.