Students get catty over exhibit

Artwork crafted by a group of high schoolers set to hang on the walls of a downtown art gallery this weekend is what students are calling the cat’s meow.
May 23, 2018 8:04 AM By: Tammy Rollie 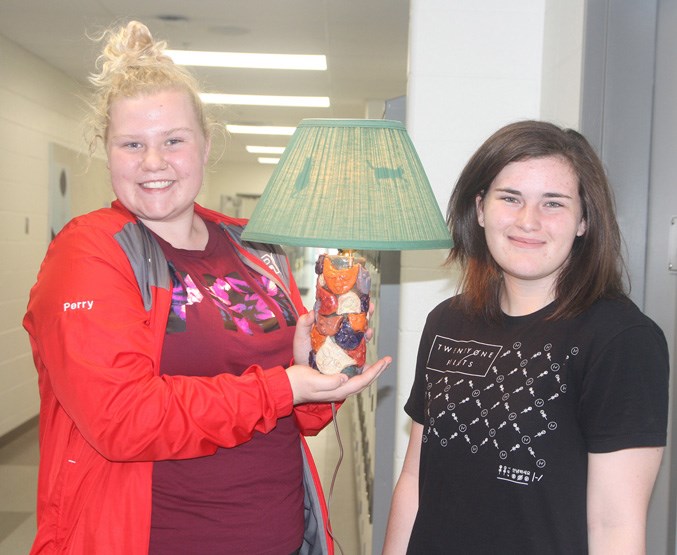 Alberta High School of Fine Arts Grade 11 students Ashley Perry and Kaitlynn Peters showcase the lamp they enhanced called Cats in the Dark to exhibit in the school’s exhibition at Lineham House Galleries on May 26.

Artwork crafted by a group of high schoolers set to hang on the walls of a downtown art gallery this weekend is what students are calling the cat’s meow. Sixteen senior artistry and professional studio students at the Alberta High School of Fine Arts created pieces in various mediums to the theme of cats in their first public exhibition at the Lineham House Galleries May 26 from 4 p.m. to 6 p.m. Grade 12 student Roan Stewart said he created an abstract piece called Stray Cat using acrylic and oil that tells the story of his cat, Little Kitty, before she showed up on his family’s doorstep five years ago. “It shows what a stray cat goes through – they don’t have a home and they have to survive on their own,” he said. “She had five kittens with her and they all died. She definitely has a story.” When Stewart learned the theme for the exhibition, he was initially worried. “I was struggling with what to do because I never do realistic work,” he said. “I figured I’d incorporate my style with the cat theme. That’s when I thought I could do a painting of my cat’s journey.” Stewart chose his favourite medium. “I like how you can flow with paint and when it’s dry you can add to it,” he said. “It gives it a nice texture.” Having never exhibited publicly before, Stewart said he looks forward to the opportunity. “This is a good chance for the students to show their work and get their name out there,” he said, adding he’s recently been accepted into the Alberta College of Art and Design. “I’ve got to start somewhere.” The theme idea came from Grade 12 student Morgan Wright, who has three cats at home. “People universally like cats,” she said. “They are a piece of art already because I love them so much. You could really just make it anything.” Wright submitted her own piece of art called Meowntie of her cat Whiskey dressed as a Mountie. Having the chance to exhibit the painting is a purrfect opportunity for the young artist, who plans to pursue visual and performing arts in post-secondary school. “It’s an awesome experience to be able to exhibit something you do in high school and get a chance to see what it’s like,” she said. Lineham House Galleries co-proprietor Cheryl Taylor extended the offer to visual arts teacher Paul Rasporich, who currently has work hanging in the gallery. “When Paul was talking to me about what he and his students are doing I extended the offer to have it in a proper gallery, which is really nice for young people to see their work displayed in an appropriate space like that. They don’t always get that opportunity. “Part of what we’re trying to do at Lineham House Galleries is to incorporate the local community of artists and that includes some opportunities for young people as well.” The work that will be on display at the downtown gallery will be diverse, said Rasporich. Among the pieces is a lamp with ceramic cat faces and feline silhouettes on the shade. “There’s some really good pieces in here and a lot of them are puns,” he said. The students’ work inspired Rasporich to do his own painting of his wife playing backgammon with their cat watching. He’s named it Catgammon. “My cat always watches us play every night,” he explained. “I feel like this is one of my best pieces.” With many of his senior students having been accepted into art colleges, Rasporich thought giving them an opportunity to sell their art in a local gallery would be a great taste of the real world as an artist. “This is a professional experience for them,” he said.