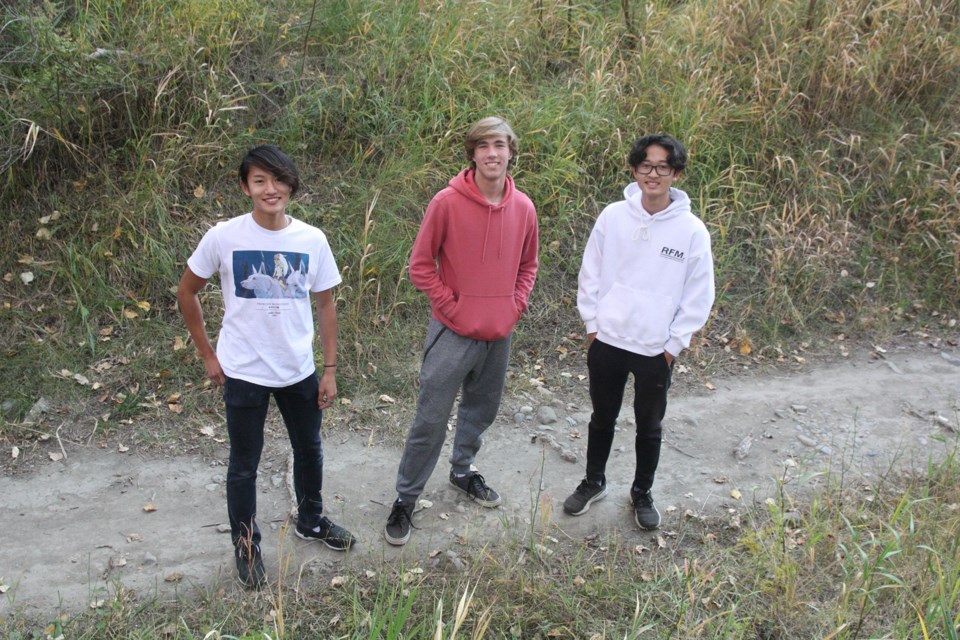 A youth-produced film that had viewers on the edge of their seats at a film festival last weekend was not only selected a winner by industry professionals, but was an audience favourite.

Solipsism was one of five films entered by Foothills youth ages 11 to 18.

LeBlanc, who placed third in last year’s competition, said he came up with the film’s concept due to his own personal experiences with broken ideas, with influence from The Caretaker: Everywhere the End of Time, a six-and-a-half hour long musical representation of dementia.

The Grade 10 Hub@Home student said he’s experimented with film for six years after receiving a laptop for school that included the iMovie program.

Following his participation in last year’s festival, LeBlanc was eager to enter again under his pseudo-company CII Studios.

“I love making movies and last year was a great time so I figured I might as well do it again,” he said. “This shoot was very gruelling, but it’s very rewarding when it all comes together.”

LeBlanc said he and Isaac aimed to create a visual representation of solipsism - the theory that one’s self is the only thing that you can know to be true – through imagery, actions and reactions of the main character, played by Isaac, throughout the 13-minute film.

“The main character is stuck in this forest that appears to change around him and space and time don’t work in a normal way,” said LeBlanc. “What I wanted to show with that was it’s kind of like a jumbled, not fully formed, idea and an idea that’s breaking down. For most of the film he’s as confused as the audience and at the end there is somewhat of an explanation, but I still wanted it to be something we can keep going back to, to try to figure it out.”

In addition to starring in Solipsism, Grade 12 Holy Trinity Academy student Isaac Lee was in charge of sound and assisted with writing the script and directing while his brother Ian served as his double.

With most of the other submissions focusing on the COVID-19 pandemic, LeBlanc said he wasn’t sure what his chances were of winning.

“The other films were pretty good, too,” he said. “I didn’t expect us to do that well. It was a great feeling.”

Festival director Katie Fournell said she was really impressed with the work that went into Solipsism.

“They really took the time to develop their concept and what they were going to do,” she said. “They had storyboards so it wasn’t, ‘I will shoot this and see what happens.’ It had sound editing, which is a huge part of the film experience and that’s a big reason they stood out.”

“There were some really stunning shots,” she said. “It’s a little bit of a workout for your brain to try to find out what is happening.”

Fournell, who has years of experience acting, producing and directing, said she was impressed with all five submissions. The judges awarded second place to Olivia Cripps and third place to Parker Levert.

“This year’s films were amazing,” she said. “I was blown away with the quality that we had.”

In the festival’s first year online, Fournell said there was plenty of engagement in the chatroom with more than 100 people tuning in, which she said is comparable to past years when the event was hosted at Okotoks Cinemas.

“Usually the Zooom audience is all families and friends, but this year there was more people who watched the screening who attended the festival in June,” she said. “This year, however, we did have less entries so that means we had a wider audience.”

Some audience members tuned in to listen to the talents of the multi-genre youth band Tokes - a guest entertainer for the festival.

“There was a lot of fans there,” Fournell said. “It was nice to see other art forms getting support from this as well.”

LeBlanc plans to take Solipsism a step further and submit the film to the Alberta Film Festival and Television Awards at the recommendation of the Zooom Film Festival judges.

“I want to keep making films like this and keep going to festivals, hopefully bigger festivals as well,” he said. “Festivals can give you more connections and opportunities in the industry.”