Public art is on the minds of more than a dozen women who got insight on what other communities offer before sharing their own thoughts last weekend. Thirteen women participated in the Town of Okotoks’ Public Art Conversation on Sept.
0
Sep 19, 2018 9:19 AM By: Tammy Rollie 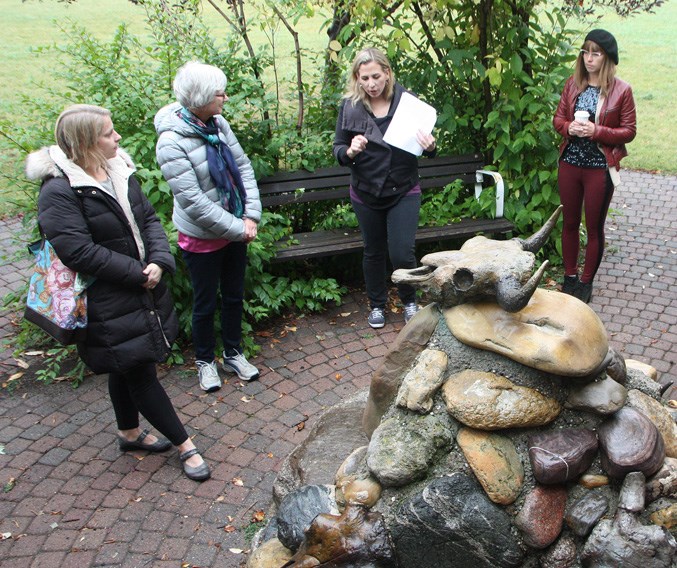 Okotoks education program specialist Jaime-Brett Sine, centre, shares some history about the sculpture in Westridge Close with participants in the Public Art Conversation session on Sept. 15.

Public art is on the minds of more than a dozen women who got insight on what other communities offer before sharing their own thoughts last weekend. Thirteen women participated in the Town of Okotoks’ Public Art Conversation on Sept. 15 where they toured public art throughout the community, learned what other communities do and provided input on how they view the future of public art in Okotoks. Local writer and painter Lee Kvern said public art is a vital addition to the community, not just to draw people to Okotoks but to benefit local artists. “It’s increasingly more difficult for artists to promote themselves,” she said. “I’m all about getting funding for artists and paying them to do the work.” Kvern said she’s excited about the economic benefits more public art can bring to Okotoks. “I’d like to see a real broad spectrum of public art, not just thematic to Okotoks,” she said. “The more public art in Okotoks the more people it brings to the community. That’s gold for tourists.” Among Kvern’s suggestions was permanent places for temporary art displays and a public performance space where people gather, with art being the reason they’re there. “We need more art,” she said. Allan Boss, Okotoks culture and heritage manager, said the Town created public art guidelines in 2005 following a public art symposium in which three sculptures were created - two in front of the Okotoks Art Gallery and the river nymph behind the library. In the 13 years following, a lot changed in the community and the guidelines became outdated, he said. “Since it was adopted there is much more public art,” he said. “We’ve been involved in a lot more public art projects like Art in the Hall, the River of Hope exhibit and we’ve got a couple of murals we created with the community like the Pubble People mural at the rec centre and the Big Rock at the Pason Arena.” Boss said the guidelines don’t cover things like damage to public art or how to fund it. “We need a concrete plan to help us move forward,” he said. “We need a new process on public art. It’s being done on an ad hoc basis. We’re engaging the public to help us find the right solution to make a program for Okotoks.” Education program specialist Jaime-Brett Sine guided participants on a tour of 10 sculptures and murals while discussing the success and struggles of public art in other communities. “In recent years there’s been a fair amount of controversy around public art,” she said. “A lot of places are developing public art policies.” Sine said she supports creating a public art program for Okotoks. “Public art is important,” she said. “There is often an economic benefit.” Sine spoke about communities where public art increased tourism, improved run-down neighbourhoods and brought people together through temporary public art exhibits. In addition to selecting the location and art, Sine said it’s also important for Okotoks to develop a funding model for public art. “We don’t have anything in place that tells us ‘x’ amount of dollars from this development goes into art and we don’t have any reserve funds,” she said. After the tour, participants watched videos of motivational speakers who spoke about the importance of artists shaping communities, art in odd places, the success of public art and making spaces for public art to bring people together. They then gathered in groups to brainstorm answers to questions like how should public art be selected. Answers included involving well-known, professional artists, creating juries with various types of people, having art that’s accessible to all and involving youth, seniors and merchants. Another question asked participants how to engage citizens in the public art planning process. Answers included involving all age groups, inviting local arts organizations, posting on social media and having a presence at public events. “We’ve got so many experts in the community, let’s use those resources,” suggested Cheryl Taylor, president of the Okotoks Arts Council. “Anything that has to do with the arts has to involve those groups robustly.” Taylor said she enjoyed the process of getting together with like-minded people to discuss the future of public art in the community. “I loved how great it is when positive people come together to solve a problem,” she said. “I want to know how we can engage others in the conversation.” Another Okotoks artist, Jennifer Stables, said she found the Public Art Conversation valuable. “I’m coming away with ideas of what public art can be,” she said. “I think there is so much we can do to just go out and engage the public.” Boss said he will put together a report that includes input from last weekend’s session and public art policies from other communities to present to administration and council next year.