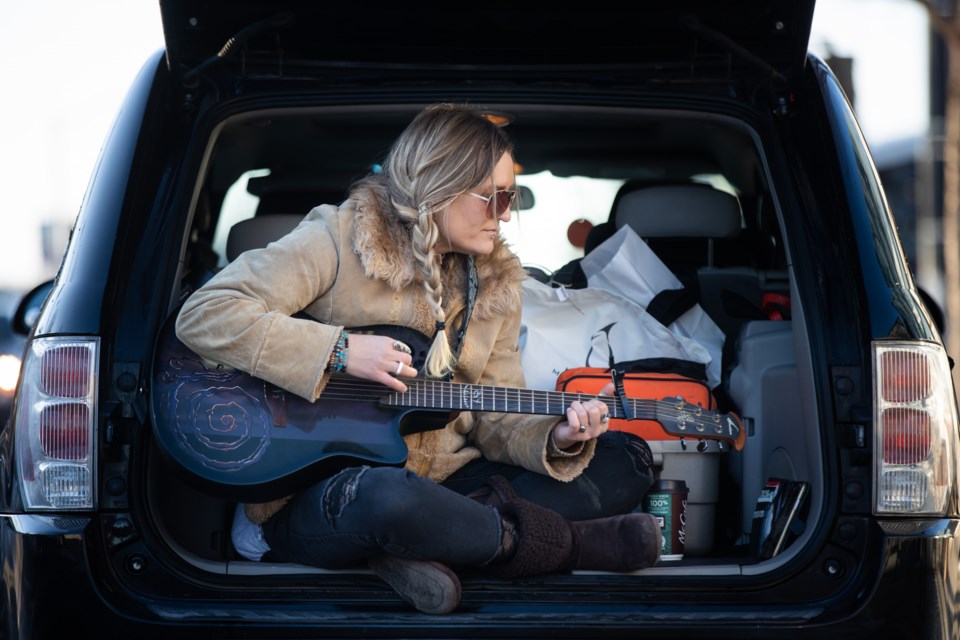 Singer/songwriter Kelsey Raine plays from the tailgate of her car parked along McRae Street on Jan. 9. While not busking or holding a scheduled event, Raine said she nonetheless wanted people to be able to hear music as they walked past.Brent Calver/Western Wheel

Musicians are an adaptable bunch.

And Okotoks singer/songwriter Kelsey Raine will be rolling with the punches with a collection of new and original material along with cover favourites as she puts on a show from home next week for the latest incarnation of the RPAC @ Home Concert Series.

“We were supposed to do it at RPAC but because of the COVID (rules) being extended it’s now from home,” Raine said. “I’m assuming it’s probably just going to look like what I was doing on my own during the last lockdown earlier in March.

“I just set up my gear and play a bunch of songs and interact with the people that are watching as best as I can. I want to play some originals, I’ve got a few more written in the past few months that aren’t released yet so I thought I would present a few of those and do some covers.”

She noted it’s always a bit awkward performing to a screen without the audience reaction, but the live-streaming has become very much a necessity for enterprising musicians during the pandemic.

Raine, a three-time YYC Music Awards nominee including Inspirational Recording of the Year and People’s Choice Award finalist in 2020, said she had a good set-up where she would be able to read audience comments on a separate screen during the performance and have some of the feedback and interaction virtually.

Earlier in the pandemic she was able to use the Longview Hotel’s stage for that purpose.

“I would be on the stage at the hotel, because they let me use the space, and then I would have to run over, read the comments on the phone or whatever I was streaming from and then run back and play a song,” she said. “It was a little bit awkward in that way rather than having people shout out their requests at you at a gig or actually hearing some sort of applause.

“That’s totally different, you know whether you’re on your game or not.”

One of the silver linings to the pandemic has been the time it’s offered musicians to bear down on the songwriting process.

“You’re not pulled in as many directions because you don’t have options to a whole lot of stuff,” she said. “It’s keeping me creative and writing.”

Audiences for the RPAC @ Home show can expect to hear a couple collaborations with Raine and Okotoks guitar virtuoso Mike Sands, including a new version of Raine’s song Goodbye which was initially released in September.

Raine also gave a shout out to her producer/sound engineer Grant Howarth, the YYC Music Awards Industry Person of the Year winner, from Audiohouse Recording Studio for his expert help in mixing and mastering the tracks.

“I’ve just been sending (Mike) my samples and saying ‘play it like this, but better,’” Raine said with a laugh. “And he’s really, really talented.”

The track Slow Down outlines why now might not be such a good time to make big life decisions.

“I do feel people can relate to it as far as what we’re going through right now,” she said. “It’s acknowledging the fact that when you’re in this survival mode, or desperate times with that fight or flight in your brain it’s really not the best time to be making decisions. We think that it is because we’re in that state of mind, action or not and trying to escape things.

“…If we step back from all of our day to day stresses would we make the same choice if we calmed everything down and slowed down?

“I think the pandemic has really forced us into that state and you can look at two ways. You can say now everything has stopped and it’s horrible and I lost my momentum or you can say maybe I needed to step back and check out where I was putting my energy anyways.”

The RPAC @ Home Concert Series performance is Jan. 20 from 7 to 8 p.m. and can be accessed here.

For more information on the series go to okotoks.ca.