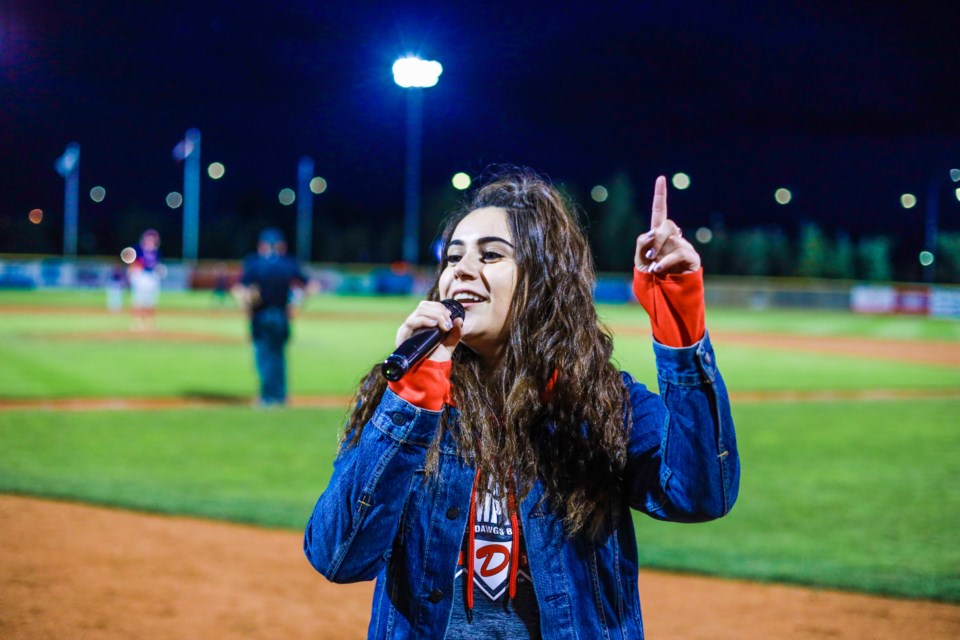 Brettyn Rose, here singing Take Me Out to the Ball Game during the Okotoks Dawgs championship run in 2019, was nominated for two 2020 YYC Music Awards. (BRENT CALVER/Western Wheel)

It feels pretty good to be recognized for your work as an emerging country artist.

Just ask Okotoks singer/songwriter Brettyn Rose, a nominee for the 2020 YYC Music Awards in both Country Recording of the Year and the Zackariah and the Prophets Memorial Award acknowledging emerging artists.

“I was sitting in my kitchen, the morning it got announced I was scrolling through Instagram or Facebook, one of the two, and I saw the post that the nominations had been announced, looked at it, saw my name on the list,” Rose said.

“I couldn’t help but feel so excited, so happy and so grateful because there’s so much talent around here so it’s a huge honour to be nominated alongside so many talented artists and creative people and even some of my peers and friends.”

Rose’s track Running out of Borrowed Time earned her the Country Recording of the Year nod.

“I released that song in April of last year and it was written a bit before that,” Rose said. “And it was about maybe a relationship, that maybe someone warned you about and you had a gut feeling things weren’t going to work out for the better.

“And it turns out I was right about those feelings, and all the warnings were correct, all the signs, but I got this song out of that situation and I’m super proud of the song.

“It’s crazy to think I released it over a year ago, wrote if before that and now he we are sitting here today talking about it being nominated for a YYC award, it’s so cool.”

Rose is also up for the Zackariah and the Prophets Memorial Award recognizing emerging artists establishing themselves on the scene.

“It’s super cool to be nominated in that category,” Rose said. “It’s a huge honour for me, as an emerging artist and as an artist who’s still developing and learning and growing. It’s super cool that they recognize us artists that are still in that phase of our careers.”

The 2020 YYC Music Awards is being held virtually this year on Sept. 20. Rubbing shoulders with industry folk will have to be done through streaming platforms.

“I’m so excited to celebrate and watch from my home,” Rose said. “And watch the awards show and celebrate with all the other artists who are nominated and it will still be so much fun to be with everyone, even if it’s virtually.”

There’s no teeing up Okotoks Dawgs games right now for the official anthem singer of the boys of summer at Seaman Stadium, but Rose has made the most of her time during 2020 keeping herself busy with a number of projects on the go.

“It was definitely quite an adjustment at first,” she said. “As an artist, and I’m sure other artists, the live performance is one of my favourite parts of being a musician, I love the face to face connection I can make with people and seeing their immediate feedback when I sing songs from being on stage.

“It’s been different, but I’m so grateful that we have technology that we have today and that we have companies and organizations who are still putting on events online. I’ve been able to do a bunch of live-streams over the last few months. I’m still able to share music and still able to connect with people virtually. Even if it’s not face to face, it’s definitely better than not playing music at all.”

She’s been writing extensively with plans to release her EP by the end of the year while also taking master classes in piano and just started with Canada’s Music Incubator program as well.

“It’s still a great time, a lot of artists are working on skills, writing more or working on stuff that kind of gets pushed to the side in the busy reality of what it used to be like,” she said. “I’m definitely just staying as productive and as busy as I can.”

For more information go to brettynrose.com.