Okotoks moviegoers not holding back in cult classic 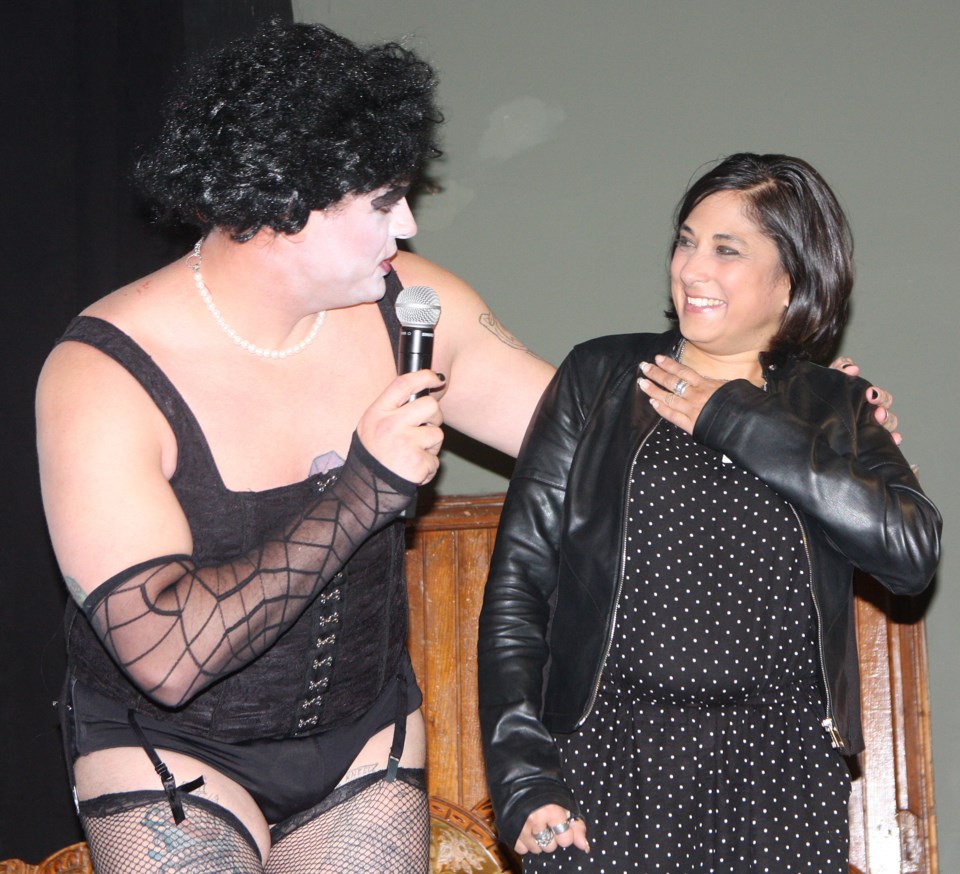 Jared McCollum selects Rashi Rajal as his sacrificial virgin to kick off the festivities at last year's screening of The Rocky Horror Picture Show. This year's event takes place Oct. 26 at the RPAC. (Wheel File Photo)

An Okotoks acupuncturist known to strut around in drag during the screening of a low-budget cult classic flick while yelling at the screen is inviting others to join in on the fun.

Jared McCollum returns to host the interactive screening of the 1975 cult-classic The Rocky Horror Picture Show in the Rotary Performing Arts Centre Oct. 26 at 8:30 p.m.

The film tells the story of a couple, played by Barry Bostwick and Academy Award-winning actor Susan Sarandon, whose car breaks down. When out in the rain seeking assistance, they come across a mansion filled with eccentric partygoers dressed in outfits from an interplanetary thrift shop.

The audience becomes part of the movie as they dance, sing and mimic the scenes dressed as either main characters or partygoers.

“It’s a great experience for people to let down their inhibitions a little bit and be a little crazy,” said McCollum. “It’s an opportunity for adults to get silly and have a little fun and be crazy. It’s excellent people-watching because you can come there and just watch everyone else be really silly.”

Many people return year after year, revelling in the opportunity to let loose while others are The Rocky Horror Picture Show virgins, said McCollum.

“It’s exciting for them to experience this for the first time - to be at a movie where you’re encouraged to yell and throw stuff and share your opinion out loud and dress up and be ridiculous,” he said. “What blows my mind is we get old cowboys in there and their wives - people that are very conservative – who are almost a little uncomfortable to begin with and by the end of the show they’re up there dancing with me, doing the time warp, and just having a blast.”

McCollum said the often sold-out event is something everyone should attend at least once.

“No one should go without seeing Rocky Horror and enjoying that experience,” he said. “There’s nothing else like it.”

As the host, McCollum works the room to create hype as people file in. When the lights go out and the movie plays, he’s on stage singing, dancing and acting out scenes.

“As the show goes on those that are showing interest, that want to be a part and are dressed up, I bring on stage and they act out part of the show with me,” he said. “We dance a little bit and if they want to sing they can. We do that throughout the show.”

At intermission, partygoers can participate in a costume parade and contest for the opportunity to win prizes.

“They don’t have to dress up as the main characters,” McCollum said. “They can just throw on a top hat or dress like the partygoers in the movie.”

The evening will end with a dance sequence to Let’s Do the Time Warp.

Tickets to attend The Rocky Horror Picture Show cost $20 in advance and $25 at the door. They can be purchased at the Okotoks Art Gallery, by calling 403-938-3204 or at www.okotoksculture.ca. Props and packages are included in the admission price.

Attendees must be 18 years or older.