More than 50 films will be live streamed during the four-day online event, including three with Okotoks connections.
Jun 10, 2020 10:30 AM By: Tammy Rollie 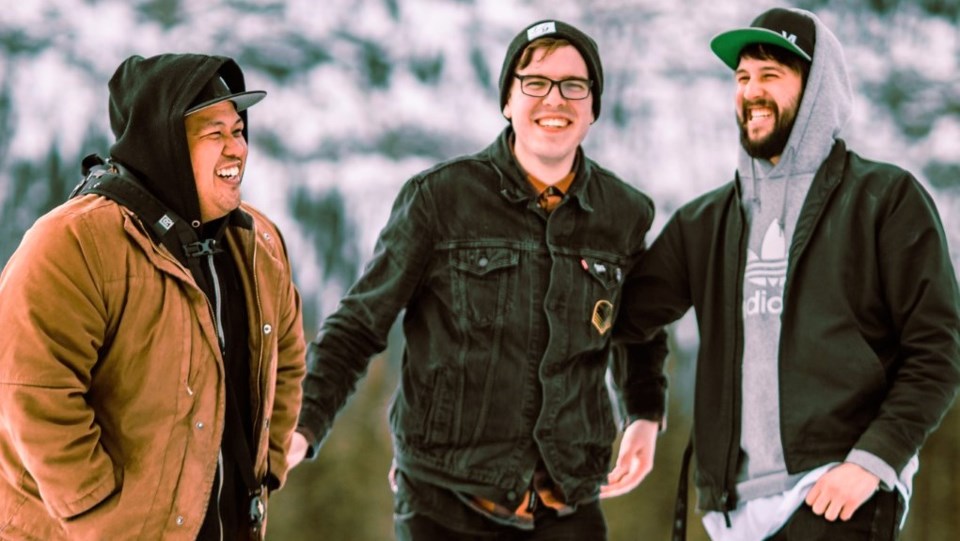 The producer of the short film Finch, Andrew Peloso, right, with director of photography Riley Patten, centre, and editor Jon Cubid. The film is one of more than 50 that will be screened during the Okotoks Film Festival June 11-14. (Photo Courtesy of Bence Horvai)

Movie buffs eager to take in the Okotoks Film Festival's top film choices this spring will watch from the comfort of their homes.

The Okotoks Film Festival is live streaming its fourth annual event June 11 to 14 - which will feature more than 50 films from around the world - due to mass gathering restrictions in light of the COVID-19 pandemic.

“I’m really sad we’re missing the community bonding experience of everyone being in the same place and feeling that energy, but I’m really excited about the scope of the festival,” said festival director Katie Fournell. “We were able to add a few more screenings than we had in the past because we don’t have to worry about venue space. It’s nice that we don’t have to dance around the venue and we’re able to show more films.”

The festival includes an awards ceremony, three workshops and 11 film screenings including five feature films, kinder reels for children, short films, twisted reels for adults and the 48 Hour Film Challenge. Tickets cost $30, or $50 for a special pass that includes beer from Hub Town Brewery and popcorn from Okotoks Cinemas delivered to Okotoks homes only.

Forty-nine films were selected from the 861 submissions, including three with an Okotoks connection.

Okotoks filmmakers Shawna Koski and Chase Ashbaugh will have their films featured in the kinder reels – a collection of short films geared for children - June 13 at 10 a.m.

Calgarian Andrew Peloso, who grew up in Okotoks, produced the silent film, Finch, about a woman escaping an abusive relationship.

“It’s quite an honour that my hometown film festival put us on their list,” said Peloso, adding he’s waiting to hear back from other Canadian film festivals. “Being that it was my hometown, I thought it would be neat to see if they would show it. We wanted to submit to Alberta-based film festivals because it’s a market that’s worth exploring. There needs to be more stuff happening for the production world in Alberta, and Okotoks was right on the list.”

The seven-minute dark, moody film stars Alberta actors Courtney Wilson and James McLane, and will premiere during the prime time shorts at 7 p.m. on June 13.

“We really wanted to paint the picture in this film how a lot of times in relationships the status quo can become life as usual,” said Peloso. “It usually takes some moment that you’re caused to action.”

“This film has no dialogue – it’s completely audio and sound scoring,” said Peloso. “We wanted to explore the emotive nature of the cinematography without resting heavily on story narration.”

Peloso said he would like to see the film used by non-profit organizations working in the field of domestic abuse and family care.

“We do projects for non-profits, but we’re getting into the documentary format,” he said. “We started this company with a clear mandate to create emotionally impactful content.”

Peloso said he and his team look forward to taking in the Okotoks Film Festival.

“We’re going to have a social distance-approved party with some of our stakeholders and friends,” he said.

Throughout the four-day festival, people can join a live chat to visit with others and ask questions of the filmmakers.

Between film screenings, Fournell will conduct interviews with the filmmakers.

“Originally, I only got to talk to five to 10 that were able to come to the festival, but this year we have all 60 filmmakers I’m talking to,” she said. “During the breaks we’ll have a live stream going constantly that will show little interviews and commercials from our sponsors so if they want to leave it running they can, or they can login at specific times.”

Click here to see a schedule of the Okotoks Film Festival and to purchase a ticket.