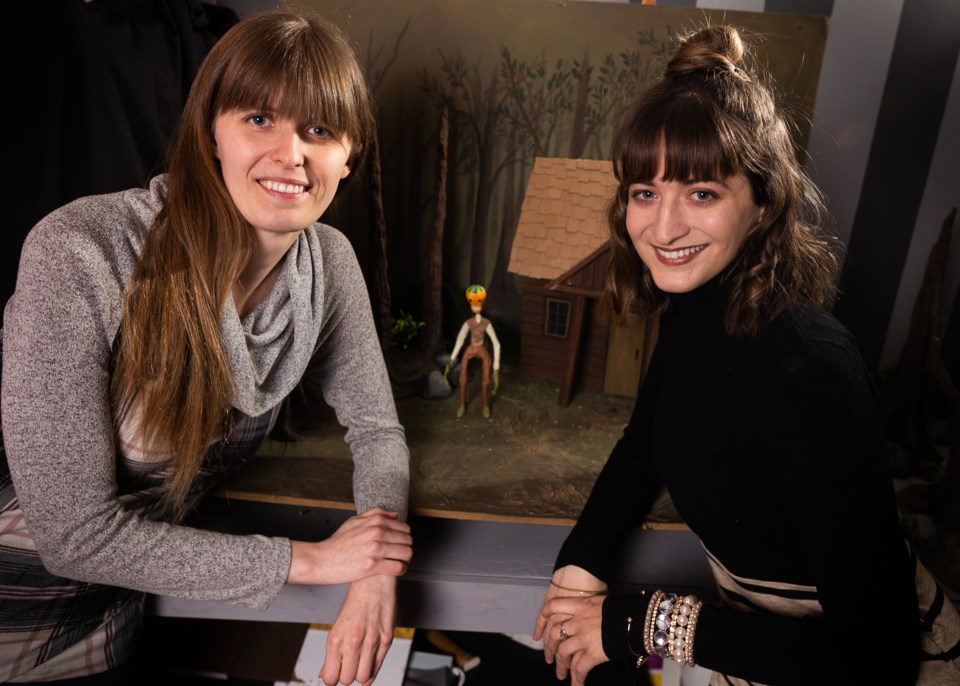 Sisters Shawna (left) and Alyssa Koski are Okotoks filmmakers who have submitted their animated film "A Gourd Head's Lesson in Humanity" to the Okotoks Film Festival. The festival kicks off with a launch party May 1 at 7 p.m. online, and the festival will run June 3-6.Brent Calver/OkotoksToday.ca

The digital curtains will rise once again for the Okotoks Film Festival, now in its fifth year.

The film festival is running June 3-6 with scheduled live-streamed screenings and other presentations.

“I’m so excited, I’m thrilled at our entire society’s eagerness to keep bringing films to Okotoks,” said Festival director Katie Fournell in a May 26 interview.“We can’t thank the community for their support enough.”

With technology bridging the gap, the festival will feature not only online screenings, but both live and recorded Q&A sessions with filmmakers abroad.

“It’s kind of exciting that we’re online for the reason that I get to interact with more of our international film makers,” Fournell said.

Fournell was able to do a recorded interview with the director and producer of a Japanese skateboarding film titled Stand Strong from their home country.

“We got to have a conversation about their film that at the in-person festival, just wouldn’t be possible,” she said.

“It’s a really cool way to bring the world together here in Okotoks.”

The goal is to keep an online element in future in-person festivals once the world return to normal.

“We’re hoping to keep a portion of the films online in the future, and the interviews are something we’re going to keep,” she said, adding it will also allow newcomers to film festivals to get a taste of the experience.

There’s other new aspects coming this year for the film festival.

“We also have a brand new event that’s coming this year called the Film Find,” Fournell said in an earlier April interview.

The Film Find will be a scavenger hunt, anchored to businesses and other places in Okotoks.

“Our hope is maybe it lets people see and discover places in town and see some fun art," she said.

While the festival runs June 3-6, viewers will be able to watch some of the content outside of that window.

“We will have an online on-demand component this year, which means people can tune in whenever they want for certain films from May 30 to June 12,” she said.

Returning to the festival’s screen once again are the Koski sisters, Shawna and Alyssa, who have run films in each year since the event’s inception.

This year the two are fielding a stop-motion animated feature named A Gourd Head’s Lessons in Humanity, featuring a gourd that has been brought to life as a person.

“It’s a film about a gourd that spontaneously comes to life and has to learn about what it means to be human,” said Shawna, who did the animation, filming, and editing of the film.

The premise might not be so straight-forward, she added.

“The thing is with a lot of our films is it goes a certain way, then turns in a different direction," she said.

Alyssa, who led the art direction, set building, prop design, and sound design, said another first was the addition of professional voice talent.

“It was really interesting to do the voice casting, this time we got some professional voice actors,” Alyssa said. “In the past we just used us, friends, and family.”

They also hired a vocalist to sing the theme song.

It’s the sisters’ longest film yet, clocking in at 9 minutes and 30 seconds, and it received a grant from the Alberta Foundation for the Arts.

Also on the docket is The Great Fear by former Okotokian filmmaker Iain Laird.

In the case of the film, set in Montana, a food-born pathogen is causing people to lose their memories.

The film’s IMDB pitch describes it as “A film about a collapsing food industry, a lonely farmer, a lonely botanist and the wraith-like elements that disconnect and veil us all.”

It features themes that won’t be unfamiliar in 2021, Laird said.

“It’s really come full circle, coming back to Okotoks where it was originally shot, and being shown in the middle of a pandemic,” he said.

“There’s one connection between this film we made in 2014 and what’s going on right now in the world.

“The one that struck me the most is the loss of connection... The film tries to strike home how connection is the most important thing and you don’t know how important it is until you lose it.

“I find that’s what COVID-19 has really challenged for a lot of people.”

Pulling the festival off with the current climate of pandemic uncertainty was a huge effort, said Okotoks Film Society president Elisa Shigehiro.

“I’m really proud of everyone who’s been putting this together,” she said. “This year we planned to have a live show with no expectation how it was actually going to happen.

“It was all the same work, but somehow doubled because of the constant feeling of possibly needing to change it up.

“I’m really glad it’s happening again this year. We’re going to offer it in such a way that you can view it safely, so get your family together.

“It’s definitely going to be a show worth checking out.”

More information can be found at https://www.okotoksfilmfestival.ca/festival.php