Eric Gallant and Connor Smith have delved into electronic music, creating 35 songs in six months and capturing the attention of music lovers online.
Oct 17, 2020 10:00 AM By: Tammy Rollie 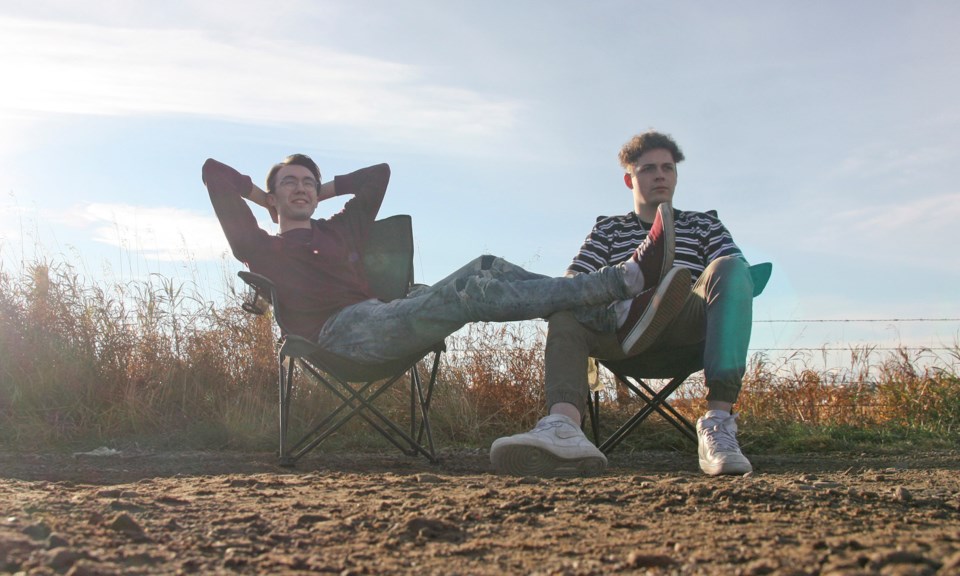 Connor Smith, left, and Eric Gallant chill near a field north of Okotoks. The pair has released 35 songs this year through their band Tokes. (Tammy Rollie/Western Wheel)

Two young musicians have ditched their instruments for a more technical style of music making.

Eric Gallant and Connor Smith have delved into electronic music, creating 35 songs in six months and capturing the attention of music lovers online.

The lifelong friends have experimented with electronic music since Gallant purchased the FL Studio program in junior high school.

“You can do so many things like add effects to your vocals and beats to songs,” said 19-year-old Gallant, who has experience playing drums and electric guitar. “I didn’t have a drum kit at home and I wasn’t super good at guitar. I just wanted to make music.”

For years the two played around with the program, recording songs as a joke.

A year ago, Gallant decided to create a song on his own, producing the music and writing the lyrics, and shared it with Smith six months later.

“I was messing around on the program making beats and was like, let me try singing for once and see what happens, and it turned out good,” he said. “It really came out of nowhere. For me, I never wrote any lyrics in my life and Starfall was the first time I wrote anything serious.”

After sharing Starfall with Smith last spring, the momentum began.

“My closet has turned into a studio,” said Gallant. “We try to hang out at least once every two days, sometimes every day. We will spend two or three, maybe more, hours just writing and recording.”

After two years of goofing off, 18-year-old Smith, who has been singing in choirs and musical theatre most of his life, was surprised when Gallant shared Starfall with him.

“I was like, 'I didn’t know you could do this, Eric,'” he said. “I always wanted to record something, but never had the time or reason to do it.”

The duo churned out mostly hip-hop and pop tunes, with influences from other genres.

“There’s rock elements, alternative - we’re really expressing ourselves,” said Smith. “I am kind of taking all of my genres of music I listen to and putting them into the hip-hop genre. I’m never trying to keep it the same thing over again.”

When it comes to writing lyrics, the topics range from relationships to good times.

“If we’re writing any sort of song and run out of ideas of personal experiences, sometimes we write something general that people can relate to,” said Gallant. “Sometimes when we’re at home something will pop in our head and we’ll be like, ‘I want to write this down.’ When we get together to record we put on a beat and start writing together.”

Electronically-produced music has been growing rapidly in many genres of music over the years, said Gallant.

“Pretty much every single artist that does hip-hop since the ’90s has been doing it electronically,” he said. “I like it. It makes it very easy. We’ve put out 35 songs in five or six months. If we were doing this with guitar and drums and bass it would have taken a lot more time.”

As the songs started pouring out, Gallant and Smith were faced with the challenge of naming their band.

“We were sitting there for probably an hour like, we need to come up with a name if we want to release a song,” said Gallant. “We couldn’t come up with anything that didn’t sound goofy. We thought, we are from Okotoks and Tokes came to play.”

The name has its advantages due to its slang reference to smoking marijuana.

“There has been some people in different provinces that have found our music through the word ‘tokes,’” said Smith. “They would share a video and tag us in it with them smoking.”

Every song created by Tokes is released on popular music platforms from iTunes to Spotify.

Smith said they found a reliable and affordable distributor to send their music and artwork to.

In the past six months, Tokes released albums Pulsar and Tokes World and EPs Fit to be Tamed and Days Gone, as well as several music videos they shot in and around Okotoks that are now on YouTube.

Tokes’ songs get an average of 80 to 90 streams the first day of their release. The band’s September release, 4 Horsemen, reached 400 streams in three days and its first release, Starfall, has now been streamed more than 3,000 times, said Smith.

“It’s been growing and growing,” he said. “More and more people are listening. It’s getting a really good response.”

Gallant and Smith don’t plan to stop there.

“We are both working, we both just got finished high school and I chose not to go to post-secondary because of COVID,” said Smith. “We’ve had time to really just work and make music and we want to keep doing that. More and more have started to listen so that feedback has motivated us to keep pushing and keep trying to get more of a following.”