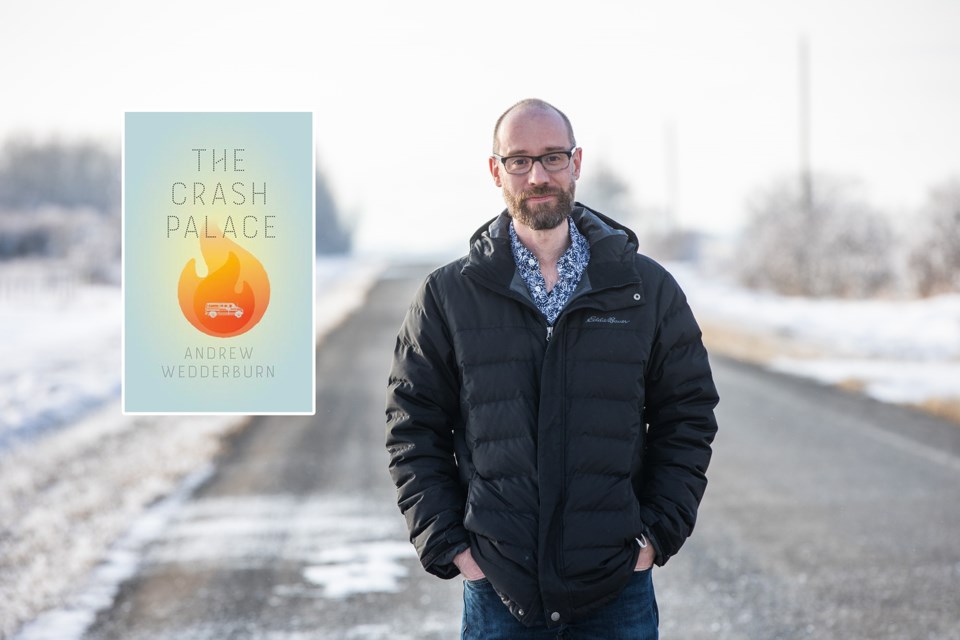 It doesn’t take too long for a tribute to growing up in the Okotoks area to appear in an author’s second novel.

The dedication in Andrew Wedderburn’s The Crash Palace reads: “For Mom and Dad”.

“I learned my love of reading and storytelling from them,” Wedderburn said of his parents, Dave and Maureen. “They were tremendously supportive of me all the way along... Being able to sit down and write over the years is a lot because of their help along the way... They always trusted in me that I would make it work.”

Although The Crash Palace starts with a dedication to his family, it’s not an autobiographical novel, although there are touches of Wedderburn’s life in the pages.

It’s a coming-of-age story of Audrey Cole, who grows up in Canmore, ends up chauffeuring a rock and roll band -- the Lever Men — and ultimately winds up living in the Beltline in Calgary.

The Crash Palace is a fictional house near Rocky Mountain House where the band and Cole would go to as a retreat. Cole ends up revisiting the Crash Palace due to a series of events in her life as an adult — including reading an obituary of Alex Main, an individual she met at the Palace.

“There are two time frames, a time when Audrey is young and a timeframe when she finds herself as a single mother,” Wedderburn said. “There is the coming-of-age thing and then what happens after she has aged.

“The death of Alex Main kind of brings the past back to her and that is what leads to her leaving in the middle of the night to drive out to this place and deal with what happens.”

Wedderburn was the lead singer in a punk-rock style Calgary band Hot Little Rockets in the 2000s. He also lived in the Beltline before moving back to Okotoks with his young family five years ago.

“We toured the country for 10 years. We were back and forth as far as Halifax, a lot of time on the road in western Canada between Winnipeg and Victoria – you end up at different places that are kind of odd,” Wedderburn said. “The Crash Palace is like some of the places we visited.”

Writing about places he has been or lived is something he learned from Aritha van Herk, a well-known Alberta author who was one of Wedderburn’s instructors at the University of Calgary.

“Don’t think you have to travel to some exotic place to be a writer,” Wedderburn said. “Look around at where you are and write that. She showed that to us about writing about Alberta the way she did.

“That made me realize I can do this – write about the places I have been.”

And while his love of writing came from mom and dad, it was fostered while growing up where he now calls home, Okotoks.

He said he received lots of help while attending Foothills Composite High School and other schools in the area – his creativity opening up with the help of his former English teacher, the late Wes Hollings.

“I had so many moments in his class where the world opened up – he taught me to think about things in different ways,” said Wedderburn, a 1995 grad. “That put me on the path in many ways.”

The Okotoks author is pleased to have his second novel completed and is looking forward to further writing ventures.

“It’s like you're running this marathon and working with these ideas,” Wedderburn said. “It feels good to have it finished and you feel sad {on?} one hand you can’t tinker with it anymore.

“I’m excited for people to read it and to interact with the characters.

“I feel free in a way, I can tell other stories.”

Wedderburn’s first novel was The Milk Chicken Bomb, published in 2007, about a 10-year-old girl who grows up in small-town Alberta. In 2008 it was a finalist for the Amazon / Books in Canada First Novel Award, and long-listed for the International IMPAC Dublin Literary Award.

The Crash Palace is available at bookstores in Calgary. Some copies willl be in stock at Pixie Hollow in High River in the near future.