Okotoks area artists pitching in after concerns over coal mining

Artists from across Alberta, British Columbia, Saskatchewan, and Ontario have contributed art to the the Livingstone Landowners Group (LLG) for an online auction to fund coal mining consultation.
May 11, 2021 10:30 AM By: Brent Calver 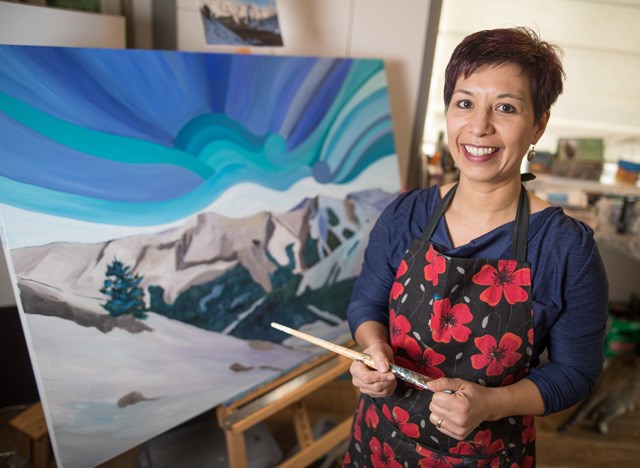 Okotokian Janifer Calvez in her studio in March 2017. Calvez is one of 24 artists that have contributed work to an auction raising funds for the Livingstone Landowners Group. (File photo Brent Calver/OkotoksTODAY)

Foothills area artists are offering their works to an auction aimed at raising awareness about the risks of coal mining.

Twenty-four artists from across Alberta, as well as British Columbia, Saskatchewan and Ontario have contributed art to an online auction for the Livingstone Landowners Group.

“We learned lots from the experts and scientists that we hired and were involved with the hearings,” said Norma Dougall, vice-president of the LLG.

“The more knowledge we got, the more concerns we had with the possible risks of coal mining in the Eastern Slopes, versus the possible economic benefits.”

Okotoks artist Janifer Calvez, who has crafted a significant body of work around the Foothills and the Canadian Rockies, is contributing to the cause.

“I’m donating art because I’m concerned about the impact that open pit coal mining in our Eastern Slopes would have on our important and sensitive headwaters of our rivers, and the quality and quantity of water in dry Alberta,” she said.

“I grew up in Pincher Creek. I remember when we would drive through the (Crowsnest) Pass and everything was black in Coleman.”

Keeping a piece of land near Cowley with her husband, Calvez is also a member of the LLG, the Livingstone Range is in her part-time backyard.

Initially alarmed at the rescission of the 1976 Coal Policy in May 2020, Calvez said her family saw roads and signs of exploration appearing in some of their favourite hiking territory.

“All of a sudden there were roads on Cabin Ridge where there were never roads before,” she said. “This area that had previously been protected for 45 years was opened up to coal mining.

“These are places that we go, we hike, we enjoy, and we tread lightly.”

Her contribution, an original acrylic on canvas in her signature style of the layered foothills scenery and swirling abstract skies titled Alberta Harvest is of the very scenery she wants to see protected.

The LLG intends to use the proceeds to further fund evaluating the potential risks of coal exploration in Alberta’s Eastern Slopes.

Comprised of approximately 2,500 landowners based in the Livingstone-Porcupine Region, the group gained attention as an intervener in the Impact Assessment Agency of Canada’s (IAAC) January hearings to review Benga Mining Ltd.’s application for the Grassy Mountain Coal Project.

The Grassy project, located on Category 4 lands where mining is permitted, was not affected by the government’s decision to reinstate the 1976 Coal Policy, and the IAAC still lists the assessment as “in progress.”

The reinstatement also did not signal an absolute end to the potential of coal mining altogether, contingent on consultations for a new modernized coal policy.

“We’re cautiously optimistic, but it’s not over, and we have to keep pressure on the government,” Dougall said. “It's not just a local thing to Alberta; it affects Saskatchewan and Manitoba as well if you get contamination in the water.”

“Some artists approached us wanting to help however they could,” she said. “The more they heard about it, the more they were concerned as well.”

As a volunteer organization, she added, the LLG doesn’t have paid staff, but uses funds to hire experts for future lobbying and public engagement.

“We want to make sure that the information we’re sharing with the public is fact checked, and is true,” she said.

One of the artists interested was Wes Olson, who said he saw the auction as an opportunity to support and protect Alberta’s beauty.

Now dwelling in the Beaver Hills region near Elk Island National Park, Olson grew up in Black Diamond, spending his free time in nature along the foothills.

“Pretty much every day off, weekend, summer camping trips, it was all in the foothills,” he said.

“When I saw all this nonsense about coal mining the Eastern Slopes, I wracked my brain trying to figure out how I could participate in stopping that, other than just signing petitions.”

Primarily practising the art of graphite, Olson opted to submit a piece from his newer pursuit of woodworking, an artisan cutting board with a pyrographic drawing of bighorn sheep.

He said he hopes the auction helps spread awareness for the LLG’s work.

“Artists are not typically a very radical group,” he said. “We tend to sit in the shadows and do our thing.

“So for each of these 24 people to step up and say ‘Hey, I want to contribute to putting an end to this’ is a pretty significant thing for artists to do.”

Don Hamm, a High River artist, also contributed his work after being approached.

His contribution, titled March Snow, is a print of a painting he created after a snowfall in March 2020 featuring a scene of the Rockies just west of Highway 22 year Bar U Ranch.

He doesn’t consider himself very politically active, but is leery of potential coal mining.

“I, like many, am frustrated with the direction of things,” he said. “It seems retro. Moving away from coal seems to be an appropriate step given the issues we and the rest of the world face.”