Lorne Maull tells the fascinating story of his grandmother, who homesteaded near Hardisty, in his latest publication.
Sep 29, 2020 10:00 AM By: Tammy Rollie 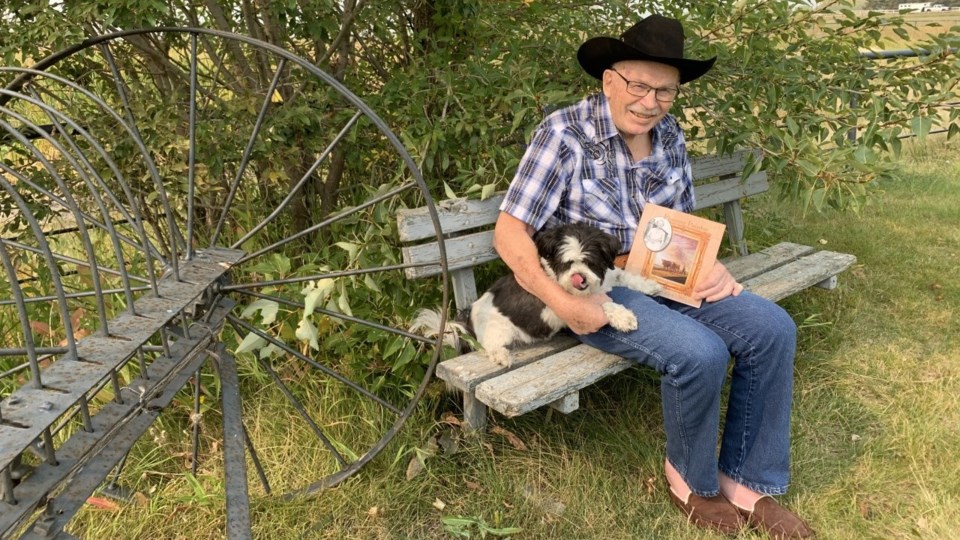 Lorne Maull, who lives north of Okotoks, penned his fourth book Pioneer Painter as a tribute to his late grandmother, who homesteaded near Hardisty, Ab. (Photo Submitted)

Lorne Maull remembers sitting at his grandmother’s bedside as a young boy in the 1940s, listening as she told intriguing stories about her life as a homesteader.

More than 70 years later, with help from his wife Diane, Maull proudly put together a collection of his grandmother Ernestine (nee Breunig) Kemper’s stories, paintings and photographs in the book Pioneer Painter.

In Maull’s fourth book, he tells of his grandmother’s early years in Germany, moving to the United States in 1904 and then moving to Canada to homestead near Hardisty, Alberta with husband Henry Kemper after surviving the Great San Francisco Earthquake of 1906.

“If we didn’t write it nobody would,” said Maull of his grandmother’s life. “I felt I owed my grandma this much to pay tribute to her. She was quite the lady.”

“The last four years I used to sit on her bed and listen to her stories,” he said. “They didn’t have painkillers in those days like they have now. I used to listen to her screaming at night, ‘God let me die.’”

His grandmother died at age 65 when he was 11. Today, he’s her last surviving grandchild.

At age 84, Maull remembers those stories vividly and decided last year to put them into a book.

Pioneer Painter tells of Henry breaking sod, an event Kemper captured with her paintbrush which is featured on the cover of the book, and how the couple worked together to dig a 20-foot deep well by hand.

“He filled a bucket and she pulled it up,” he said. “Could you imagine pulling 40 pounds of dirt up until it got 20 feet deep?”

When Henry returned to the United States to work the first two winters after moving to Alberta, Kemper worked hard to survive the cold temperatures in the sod home with their two youngsters.

Maull said her spare time was spent drawing and painting, whether outdoors or by kerosene lamps.

“She painted a picture looking south over the hills where there was nothing but expanse and grass growing,” he said. “I often wondered what she thought when she looked south at that vastness.”

Kemper began selling her drawings to newspapers and then privately around the world.

“She did pencil sketches for the Saskatchewan Farmer publication and got $5 a sketch, which was pretty big money in those days,” he said, referring to the 1920s and 1930s.

Maull suspects the money she made contributed to the couple being able to afford an Eaton’s Catalogue House and modern machinery, something their neighbours didn’t have the luxury to afford.

Despite their success, Maull said they had their fair share of hardships.

“They had the droughts and hail and everything to go with it and they had to carry on,” he said. “Grandpa used to walk or ski to Hardisty and would carry 100 pound flour sacks on his back.”

Kemper was not only a skilled artist, but also a skilled toy maker, using scraps and even chickens feet on the farm to create toys for her children. Pioneer Painter features photographs of some of the toys she made 80 years ago.

“She made native dolls and sent them to travel exhibitions and won many prizes for her handiwork,” he said.

With memories bursting to get out over the past year, Maull wrote them all down and Diane tidied up the text for grammar and spelling.

A member of the Millarville Writers’ Club, Maull said writing just came naturally to him.

Having been paralyzed from the waist down for two years, writing has kept Maull busy while keeping his memories alive. He published his first book Tall in the Saddle, a collection of own memories, in 2014.

“It’s very frustrating when I look out the window and realize I can’t cut the lawn, but I can get these stories out,” said Maull, who is in remission after battling cancer for years. “I’m very pleased with this book. It’s a dedication to all of the grandmothers. You don’t realize what they went through.”

Maull said he couldn’t have completed the book without the help of Diane, who dug up pictures of Kemper’s drawings and paintings and did the research work involved.

“We knew there were a lot of these pictures out there,” said Diane, adding they also found paintings and drawings in an old trunk. “We have a few of her artifacts and the toys that she made and gave to Lorne that are well preserved.

“Otherwise that bit of history would be gone. Very few people can trace history back to their original homesteader nowadays. Because he spent a lot of time talking with her in her last years he got to know her very well.”

Pioneer Painter is available for purchase at the Elks Farmers’ Market and Dit 'n Dat in Okotoks. The books cost $40 each.

For more information or to order online visit 7mbooks.ca