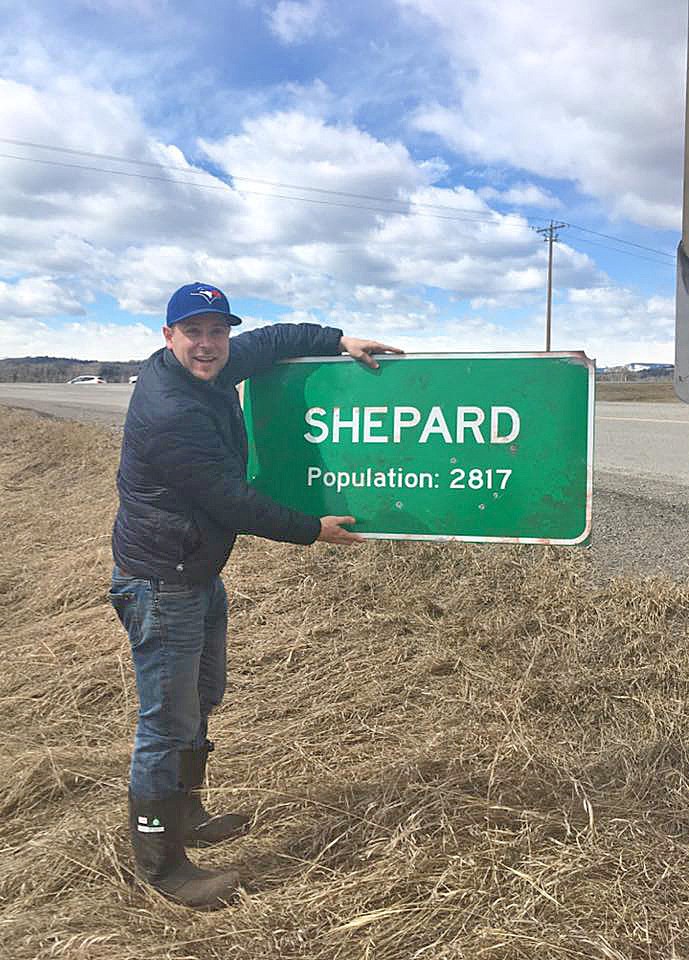 Ice Blue producer Scott Lepp with the Shepard town sign while filming in the Foothills two years ago. The award-winning supernatural thriller is available for viewing on video on demand platforms effective Nov. 5.

An award-winning supernatural thriller filmed in the Foothills two years ago can now be viewed by the masses.

Ice Blue, a feature film shot in Springbank, Okotoks and a Millarville farm in 2017, is available for viewing on video on demand platforms across North America effective Nov. 5. This includes iTunes, Google Play, Bell VOD and Shaw VOD.

Producer Scott Lepp, member of the Okotoks Film Festival board and owner of Iylond Entertainment, is over the moon about the release.

“It means that the film is working and audiences are resonating with it,” said the Okotoks resident. “This is the real first opportunity for people to access it whenever they feel like it.”

Written by Jason Long and directed by Sandi Somers, both of Calgary, Ice Blue tells the story of 16-year-old Arielle who lives on a secluded farm with her father. Arielle’s mother, who mysteriously disappeared 10 years ago, reappears and unveils secrets that leave the teen conflicted. The movie stars Canadian actors Sophia Lauchlin Hirt, Billy MacLellan, Michelle Morgan and Charlie Kerr.

Lepp, who served as interactive producer for the hit television series Heartland, said he selected Okotoks to serve as the fictitious town of Shepard for its charming appearance and the opportunity to show off the community. Filming took place at H.C. Pharmacy, Mr. Spud, the fire hall and the Chamber of Commerce in April 2017.

“Okotoks is such a beautiful area, it just works so well,” he said. “I have two other projects I’m trying to bring to Okotoks next year. This is perfect for me to be able to have a film released around the world and be able to show off the town and then go into our town and say, ‘This is the kind of exposure that we can give when we work together.’”

Lepp was the executive producer of the digital series, Hudson, based in the world of Heartland, which was shot in Okotoks last year. The series reached top 10 on CBC Gem when it was released earlier this year.

Ice Blue, which received some funding from Telus through its Telus Optik Local program, has also garnered esteemed recognition.

In 2017 and 2018, the movie was showcased in eight film festivals and came away with Best Feature Director at the LA Femme Film Festival, Audience Favourite at the Blue Whiskey Independent Film Festival in Chicago, Best Canadian Feature at the Regina International Film Festival and the Singer Award for Southern Alberta’s Best Film Feature from the Calgary Society of Independent Filmmakers.

Lepp said it was screened in seven cinemas in Calgary, Vancouver, Edmonton, Winnipeg and Ontario.

“We received some great reviews from across the country and got a lot of feedback from people,” he said. “We want people to tell us what they liked and what they didn’t like.”

When it comes to feature films, Lepp said the competition is fierce.

“It’s a tough market because you’re up against the Jokers of the world,” he said. “I try to tie them together because Joker and Ice Blue have very similar tones and underlying themes in their connection to mental illness. It’s a tough world fighting against those big budget films.”

Lepp said the next step for Indiecan Entertainment, which acquired Ice Blue to distribute in North America, is broadcast television.

“We have broadcasters screening it right now, so it will be a matter of whether or not they add it to their lineup, which we really hope for,” he said. “It would fit in with the Netflix and Craves of the world."

Lepp is currently busy with another project as the associate producer of the Aboriginal Peoples’ Television Network crime drama series Tribal. The series, filmed in Calgary, is scheduled to air in February.