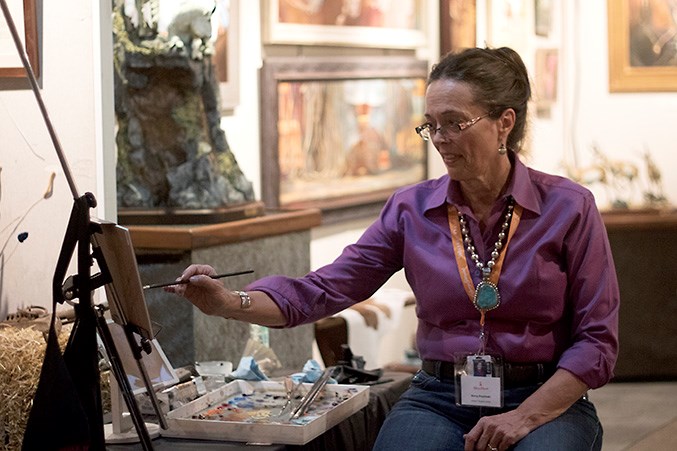 Darcy Presiloski demonstrates some of her technique at the Western Showcase. she specializes in Western art and has loved the opportunity to share her culture.

The Calgary Stampede, regarded “The Greatest Outdoor Show on Earth”, attracts hundreds of thousands of visitors annually to celebrate its Western roots. The Western Showcase juried art show enriches the atmosphere each year and will be featuring the talent of several Foothills artists in 2018. Included in the line-up is Michael Perks from Millarville, who creates three-dimensional wall hangings and sculptures entirely out of metal: a technique he says he learned from “years of playing around.” It also comes from his profession. “I’m a millwright by trade,” he said. “That’s what my company started out as - I was making snow gun parts for ski hills. Before that, I had played around as an artist. “I wasn’t a good painter, but I can use the tools associated with metalworking like that of a paintbrush, and I can cut scissors, things like that - I turn doodles into reality.” His connection with ski hills inspired Perks to name his company Little Monkey Metal Works, after the nickname “monkey” often given to lift mechanics due to their ability to do their job without falling off the ski lift. Additionally, many of his pieces are based on mountain scenes. Perks says everything he creates is “a picture of a point in time.” “That mountain is what I saw of that mountain on that day,” he said about one of his works. “And that might change - hopefully not, because that will mean there is an apocalypse - but it’s a time and date, sealed and stamped, done and delivered.” Perks’ paintings feature numerous other subjects as well, but all are based on something he saw. “I’m trying to mix contemporary with realism. So you may have the realistic idea of a tree, but it’s mixed with the contemporary idea - it’s done in steel or it’s twisted in a manner where the reality is left behind,” said Perks. His efforts have earned Perks the adoration of many viewers and buyers for eight years and have allowed him to do what he loves. Perks says he owes his progress to his wife, who introduced him to the Stampede scene. “Without her guidance and business sense, I would be 10 steps backwards, not doing what I love. This is metal art - it takes a lot of money and a lot of equipment to create art that captures the wow-factor. Without her, I’d probably still be making little tiny coyotes,” he said. Perks said the most common feedback he receives is how much the public appreciates the opportunity to see local talent. “If I go to New York, I want to see what the New York artists have to show off…its the same,” he said. “It’s reflective of who we are.” Darcy Presiloski is another artist from the Foothills showing off local talent at the Calgary Stampede. Presiloski said she is wired as an artist. “It lowers my blood pressure,” she said, laughing. “You’ll find with most artists, its a thing that’s not a choice, really. It’s a thing you have to do. I get into a painting or I get into a drawing…I lose track of five hours easy.” Presiloski grew up on a ranch around cattle and horses, which became the basis of what she paints. She also finds inspiration from rodeos, brandings, and scenery that can’t be found anywhere else. “My speciality is Western art, so [Stampede]seemed like a no-brainer. It’s a really good fit,” she said. “The thing I like about it is that it promotes the Western lifestyle and Western art as a distinct thing. “Calgary has Western roots, so its nice for that to be at the forefront for Stampede.” The work of Perks, Presiloski, and others will be on display and for sale in the BMO Centre until July 15. For more information and a list of participating artists go to westernshowcase