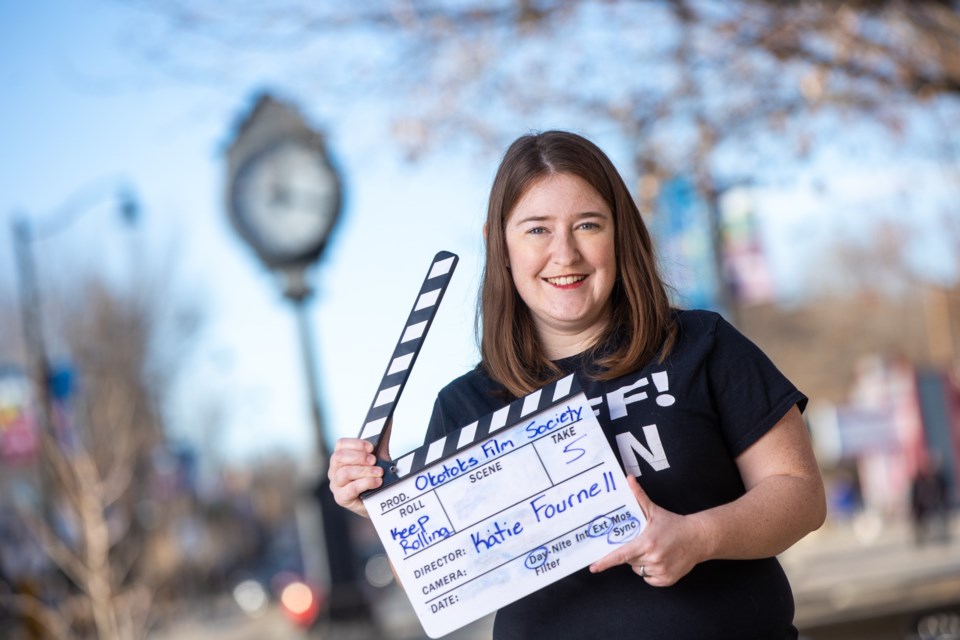 Okotoks Film Festival director Katie Fournell on Dec. 6. This year, the organization is holding the Bite-Size Okotoks Christmas Film Festival, in which 12 films will be shown online Dec. 23 at 7 p.m. (Brent Calver/Western Wheel)

Staying home this holiday season will come with an international filmmaking twist.

Fans of film will have the chance to stream 12 productions made from seven countries as the Bite Size Okotoks Christmas Festival streams live on Dec. 23.

“It’s kind of a pivot,” said Okotoks Film Festival director Katie Fournell. “We usually show a Christmas classic movie at the cinema. But we did make the decision to not host an in-person event this year and since we did that we realized just showing a classic Christmas movie doesn’t have the same meaning.

“Everybody can watch classic Christmas movies at home by themselves on Netflix or Disney Plus or any number of the streaming services available right now. We decided that if we’re going to have everybody stay at home we should show them something they aren’t going to be able to see anywhere else so a collection of short films seemed the right way to go.”

The Okotoks Film Society made the decision to go with the bite-size format on Nov. 22 and quickly got on the radar of international filmmakers, using the FilmFreeway platform to get the word out.

“It gave us very little time to go and select submissions,” Fournell said. “By comparison, for our regular festival we have six months where we’re accepting submissions.”

Despite the condensed schedule, there were over 200 submissions received within one week a dozen of which eventually making the cut.

“Not all of them were Christmas themed so that cut down on watch time quite a bit,” Fournell said. “We were looking for specifically for Christmas or holidays related to December because we know we are an international festival.”

The global influence is reflected by the submissions with the festival featuring films from Canada, the United States, United Kingdom, Spain, Mexico, Brazil and Iran.

The films include the Brazilian comedy, Very Merry Christmas Jerry, in Portuguese with English subtitles that rhyme. Greg in the Tree, is a heartwarming story of a man who just wants to put his Christmas tree on the bus and The Last Day of Christmas is more of a thriller/horror about a tree that doesn’t want to bet thrown in the garbage after the holidays.

In The Legend of Santa, California-based director Andrew de Burgh tells the origin story of Santa Claus – based on the real life Christian bishop Saint Nicholas in the fourth century — as detailed in the bonus chapter of Daniel Colyer’s book A Magical Christmas Adventure.

“The story is based in part on historical research done by our writer Daniel Colyer,” de Burgh said. “In our film, after dedicating his life to improving the plight of poor children by giving them gifts, Saint Nicholas travels North courtesy to a magical compass and the rest is history.

“In terms of both our designs, animation style, music and storytelling in general, we opted for quite an ethereal and innocent style.”

Production for The Legend of Santa spanned three countries with de Burgh and lead animator Sam Kalafat based in California, composer Marc Timón out of Spain and producer-writer Colyer out of the United Kingdom.

de Burgh called the task of putting together a film during a pandemic quite challenging and a welcome escape from everything going on in the world.

He hopes viewers can also find escapism in the film.

“With COVID devastating the world both in terms of an alarming amount of infections, an increasing death toll and the economic devastation, we are living through what is a very difficult time in human history,” he said.

“When people watch the film, I hope it is something that can take their minds off their problems in life. Although Christmas is a Christian holiday, the film itself is a universal story about empathy, kindness, benevolence and helping the less fortunate.

“I also hope I’ve done my job as a director and people enjoy the film and are impacted by it on some level.”

Despite the hurdles of the pandemic, Fournell said there’s a great deal of optimism going into next year amongst filmmakers.

“One thing that I’ve heard from a lot of filmmakers is we’re getting pre-production right,” she said. “Pre-production is everything before you get the crew and cast together – picking who your cast is, writing the film, making sure the locations are locked down, making sure you have all your props and everything you need.

“And, especially in the case of independent filmmakers, everybody is just so excited about production. That’s the fun part about filmmaking.”

The Bite-Size Okotoks Christmas Festival streams on Dec. 23, starting at 7 p.m. The airing of the films will be followed by a Q & A with the filmmakers after the screening.

For more information go to okotoksfilmfestival.ca/events.php