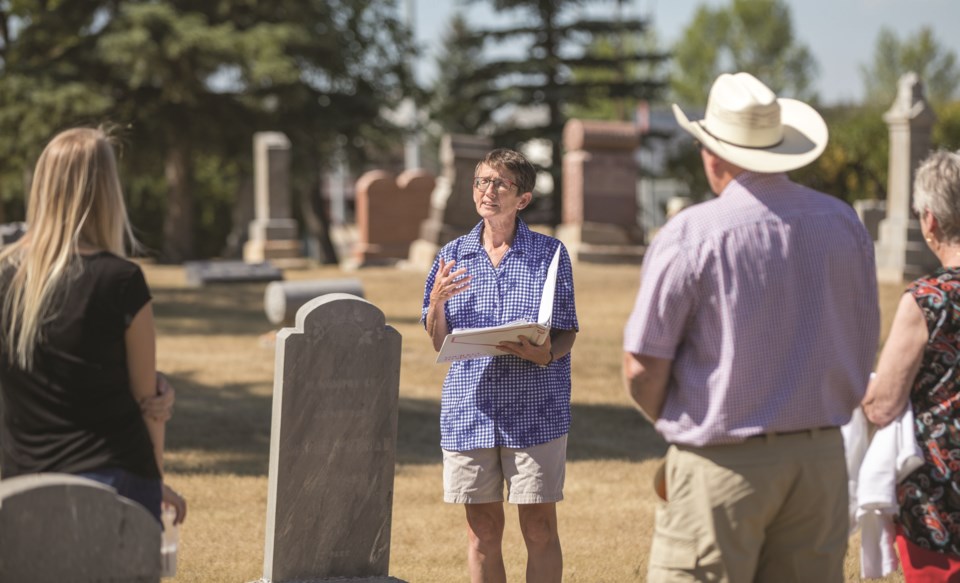 Keen to share even more stories of Okotoks’ early years, a historian is changing things up this summer.
Okotoks & District Historical Society member Karen Peters is leading the public on a guided walking tour of South Railway Street July 6 at 2 p.m. to bring to life the early landscape and struggles faced by residents and businesses attempting to thrive alongside the Sheep River.
“We’ve been doing tours of McRae Street and Elma Street for a few years so I wanted to try to change it up,” said Peters. “I wanted to do this part of town because we haven’t done it before. It seems to get missed every time we do any historic walking tours.”
After meeting at the museum, Peters will lead the tour along South Railway Street while sharing stories of former residents and businesses in the area.
“I’ll talk about how the street has changed from elevators and the oil industry and that now it’s basically all recreational,” she said.
Peters said the land, which belonged to the Canadian Pacific Railway, was purchased by John Lineham prior to 1900, but it wasn’t smooth going from there.
“The story goes that he thought maybe that’s where Okotoks was going to be because of the railway,” she said. “He had to move his home because it kept flooding out.”
Peters said others followed suit, moving to higher ground due to frequent flooding.
The tour will also expose the importance of the railroad to the Turner Valley oilfields and the role the Sheep River played in the business community.
Peters will also show where the Macleod Trail crossed the Sheep River at MacMillan Crossing by the train bridge and Cameron Crossing close to Southridge Drive.
Three weeks later, Peters is inviting the public to a tour of the cemetery July 27 at 2 p.m. where she will tell stories of early homesteaders in the area, such as Kenneth Cameron and Alexander McRae, who are buried in the cemetery.
“There are several people out in the cemetery who came here for homesteading,” she said. “One story I want to touch on was a lady by the name of Bridget Windle. She came homesteading by herself as a widow from Ontario. A woman could be a homesteader if she was a widow with minor children dependent upon her. She had seven children. Her homestead was in the big rock area.”
Peters said she will also talk about early
homesteaders who abandoned their claims because they couldn’t farm on them due to the poor quality of the land.
“John Pelford tried twice to homestead in this area,” she said. “Each time he picked them unseen and had to abandon them because the land could not support a farm.”
Pelford ended up working for John Lineham in his lumber mill, she said.
“Homesteading was very important in the area,” she said. “People wanted land and with land was what they thought was wealth and standing in the community and having a place of home.”
Peters, who’s been leading historical and cemetery tours in Okotoks for years, said people from across the Foothills and Calgary attend.
“Sometimes they had family live in those areas or buried in the cemetery or lived in those parts of Okotoks and want to find out more about the history and reminisce,” she said. “Some are just interested in history.”
Peters collects her data from editions of the Okotoks Review newspaper and the history books Century of Memories and In the Light of the Flares.
She also has a membership with ancestry.ca, which she uses to find historical documents and connections.