Guide dog inspires song "On the Outside Looking In" 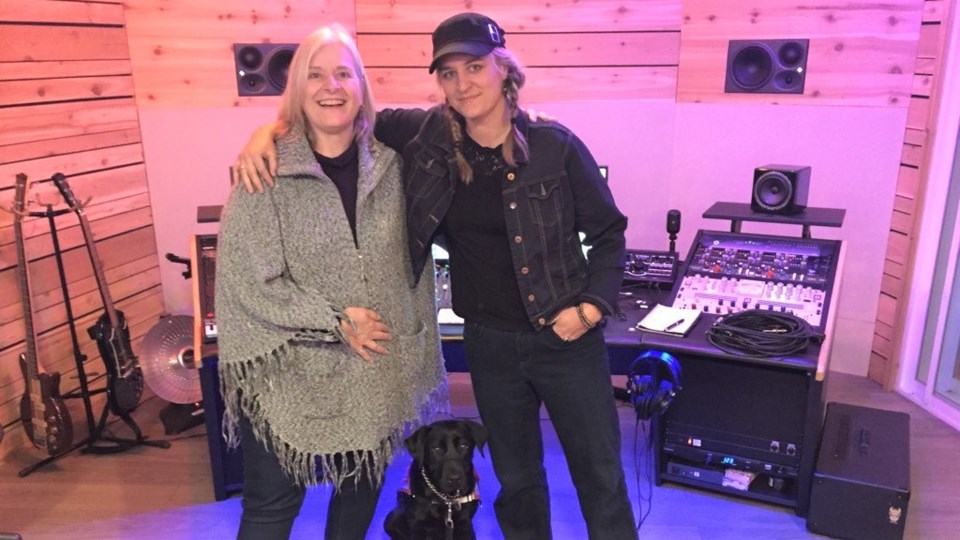 Okotoks singer/songwriter Kelsey Raine, right, with Alise Kuipers and her guide dog Syrup while taking a break from producing On the Outside Looking In. (Photo Submitted)

A four-legged companion who gave a High River woman her independence was the inspiration behind a song she’s now gifted to the Lions Foundation of Canada Guide Dogs.

Inspired by her first guide dog, Syrup, Alise Kuipers wrote a poem describing the profound moment the black lab came into her life and got the help of Okotoks musician Kelsey Raine to make it into a song.

“I wrote a poem to try to capture my journey, then I thought if I had the right person to put it into a song it would be a great way to bring awareness to the fantastic work the foundation does for so many people with disabilities,” she said. “I needed someone with the talent and voice to bring it to life and that’s where Kelsey came in. I had complete trust in Kelsey’s talent and she would check in with me as the song developed.”

Kuipers said she’d known Kelsey for years and knew of her dedication to people with disabilities. Both women work for Inclusion Foothills in High River, the former Foothills SNAPS.

“Her understanding and compassion comes through in everything she does and it definitely shines through in this song,” she said. “She was able to capture the essence of what I was feeling.”

Kuipers, who’s suffered from hearing loss most of her adult life, said she’d missed out on so much due to her disability.

“It's like holding your breath for so long and now I can breathe,” she said. “I wanted to capture what it was like before the dog guide and my life with my dog guide.”

After Syrup retired due to medical reasons, Hydra came into Kuipers’ life.

“Syrup was all business and Hydra is a good balance of work and play,” she said. “When she hears a sound she is trained to alert me so she drops what she is doing and lets me know something is up. The way she alerts me is to touch me, then lead me to the sound. She'll point with her nose and gets a reward.”

It’s taboo to pet a working guide dog, yet when Hydra isn’t working she loves attention.

“She loves people and when the red harness is off she is able to get lots of attention,” she said. “Hydra comes to the office with me every day. She has her special spot under my desk.”

Kuipers said she’s giving back to the Lions Foundation of Canadian Dog Guides through the song.

“We hope the song will bring awareness to the foundation and, in turn, generate donations,” she said. “People can download the song, too, and any money from that is sent to the foundation.”

The process of creating On the Outside Looking In was like a gift for Kuipers.

“I got such a kick out of being allowed in the sound studio for the final pieces,” she said. “What an incredible experience. I have a whole new appreciation for what goes on behind the scenes to produce a song.”

Raine said she’s honoured that Kuipers asked her to be part of the inspiring project a year ago.

“I knew Alise for years,” she said. “We were always crossing paths. I did a performance for one of their fundraisers.”

Raine couldn't help but be inspired by Kuipers’ story and got to work right away.

“The lyrics really told a story and didn’t need much for editing, just a few lines flipped here and there for a more melodic flow,” she said. “I kind of just locked myself in my music room for a day and by the end of it had the music written and arranged with a pretty good idea of how I wanted the vocals to sound.”

Raine said she enjoyed the challenge of taking someone else’s lyrics and writing music to them.

“The liberation of letting whatever inspired you to write those lyrics and releasing it everywhere is such an amazing feeling,” she said. “That’s really exciting to be able to offer that for somebody and being able to help such an amazing organization in whatever way I could.”

On the Outside Looking In was produced by Craig Carswell from Red Black Recording in High River and the production, recording, mixing and mastering took place at Audiohouse Recording in Calgary late last year. Raine was accompanied by High River guitar player Rick Kroeker, Okotoks drummer Aaron Asher and her uncle, Ottawa pianist Rick Woyiwada.

“I wanted the song to be authentic and emotional - I really put my all in that area,” said Raine. “The journey to have this second lease on life with these dogs, to make these connections with an animal, really changes their world and opens it up again.”

Throughout the process of putting the song together, Raine enjoyed getting to know Kuipers better.

“I’m honoured that I got to be a part of it and Alise trusting me with it,” she said. “The fact she chose me was really special.”

The Lions Foundation of Canada assists Canadians with medical or physical disabilities by providing them with dog guides at no cost. The dogs cost $25,000 to train and place, therefore the foundation relies on donations from individuals, service clubs, foundations and corporations.

On the Outside Looking In is available on various platforms including iTunes, Amazon, Google Play and Spotify.

To learn more about the Lions Foundation of Canada Guide Dogs visit https://www.dogguides.com/donate.html#