Foothills Philharmonic Orchestra ready to pick up the tempo

Twenty-one string players with the Foothills Philharmonic Orchestra will perform the group's first concert in almost a year on Oct. 16 and 17.
Oct 15, 2020 8:00 AM By: Tammy Rollie 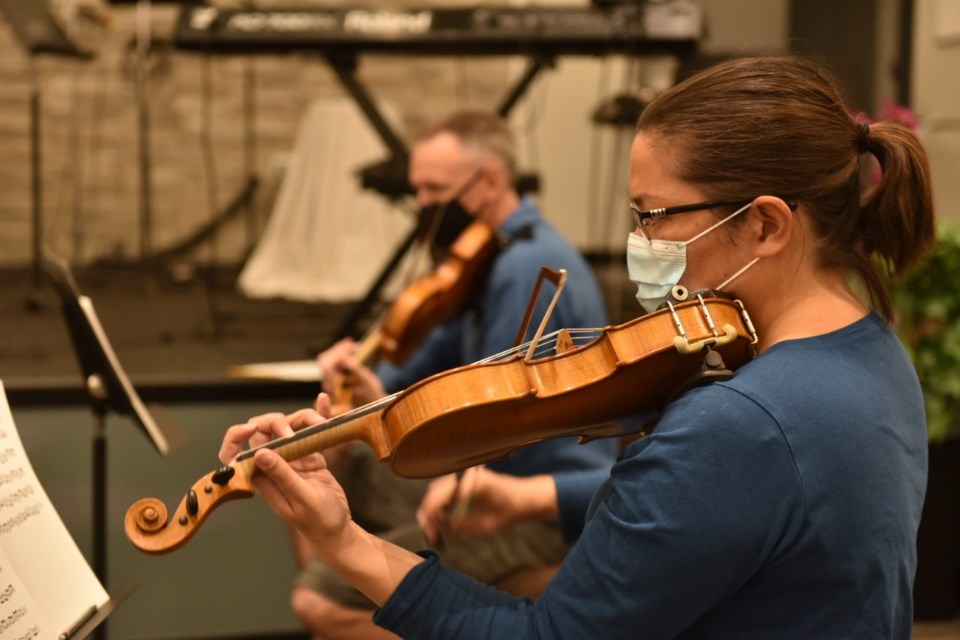 First violinists Lesley Jefferson and Michael Gray with the Foothills Philharmonic Orchestra rehearse for their concert Better Together, which will be held at the Okotoks Alliance Church Oct. 16 and 17 at 7 p.m. (Photo courtesy of Karen Dees)

Unable to perform with fellow musicians made for a long spring and summer for a Foothills orchestra’s principal cellist, but her wait has finally come to an end.

Karen Dees and 20 other string instrumentalists with the Foothills Philharmonic Orchestra are hosting their first concert since the COVID-19 pandemic shut down music concerts and group rehearsals in March.

The concert, Better Together, at the Okotoks Alliance Church on Oct. 16 and 17 at 7 p.m. will be an evening of baroque, classical and modern string music.

“I’m just thankful that we can perform no matter how large or small the audience is,” said Dees. “It looks a little different now - we’re six feet apart, wearing masks, and it’s not the entire orchestra, it’s just the string players that are able to play. It feels a little bit weird, but I’m just grateful that I can play with other people.”

The High River musician said her favourite part about playing is being with other musicians.

She began cello lessons at age 10, completed her Grade 9 Royal Conservatory exam after high school and, after putting music on the backburner for several years, picked the cello back up and joined the Foothills Philharmonic Orchestra in 2016.

“I love putting my little part with your little part and that person’s little part and together we make music that you could never do by yourself,” she said. “Because that’s my favourite part about being a musician it was very hard to have that so abruptly taken away back in March.”

Dees, a founding member of the orchestra, which formed in 2016 and performed its first concert in June 2017, has no reservations about performing publicly amid the pandemic.

“I feel like the orchestra and the society have taken very strong precautions, maybe a little bit too far in my own personal opinion,” she said. “We are doing what we can do to keep our members safe. It will be the same for the audience members.”

Conductor and artistic director Terry Lee said the Foothills Philharmonic Society made the decision to reunite the orchestra, yet excluded the woodwind members as a safety precaution.

The remaining 21 experienced violinists, cellist and double bass players will perform Bach’s Brandenburg Concerto No.6 and Vivaldi’s Concerto Grosso in D Minor from the baroque era, Mozart’s Serenade #13 in G "Eine Kleine Nachtmusik" from the classical era and Holst’s St. Paul's Suite for String Orchestra from the modern era for this month’s concerts.

“It will be a fun, mostly familiar evening of music,” said Lee. “We were tired of sitting at home. It was time to get out and play music for someone.”

Lee said the orchestra typically hosts three concerts a year with at least two alongside other Foothills Philharmonic Society groups like the chorus and chamber chorus.

“That is not happening, at least not between now and Christmas, so the orchestra will perform this on our own,” he said. “We’ve been rehearsing together since the beginning of September, socially distanced with masks. Six to eight weeks of rehearsals is plenty of time to get these pieces prepared.”

While the woodwind players are sitting idle, Lee said there’s been little change with the string players.

Two senior players chose to not continue with the orchestra at this time and the group gained three new members who either moved to the area recently or decided to pick up their instruments again, he said.

“It’s just so good to be able to make music together again,” he said. “The act of creating beautiful music in the Foothills feeds the soul of many of us.”

In planning the concert, Lee said the society was careful to select a venue that allows for adequate space for physical distancing while having the ability to accommodate 75 people and offer a safe and clean environment.

“We picked this venue because it’s got a new HVAC system, hospital-grade filters, they’re sanitizing with ultraviolet lights in addition to wiping down surfaces,” he said.

Spectators must declare in advance that they’re not sick, sanitize upon entering and exiting the church, sign a waver form, stay six feet from one another and wear a mask, said Lee.

The concerts will also be livestreamed through the society's website and Facebook fan page for those unable or choosing to not attend.

“We would be thrilled for people to join us for this concert either in person or online,” said Lee. “It’s going to be a lovely evening and refreshing to everyone.”

The $5 cost to attend each concert will be donated to Foothills area food banks.

For more details or to purchase tickets visit https://foothillsphilharmonic.com/