The Travelling Mabels to perform "Take Me Home" at the Flair and Derrick June 18-19, offering their signature mix of country, rock and blues.

One of the Foothills’ most prolific folk bands is releasing a new album this week.

To mark the release of Take Me Home, the award-winning Travelling Mabels are performing on June 18 and June 19 at the Flare N' Derrick in Turner Valley.

The album, much like the band, will offer the mix of styles they’re known for.

“It’s a real mix. We’re not folk, we’re not rock, we’re not country, we’re kind of a mix of everything,” said Eva ‘Mama Mabel’ Levesque. “Three songwriters and every one of us is different, and it’s kind of cool because when we do get together, the harmonies blend so well it works.”

That group consists of Levesque, Lana Floen and Therry Lawson, all providing a mixture of vocals, guitar, bass and percussion, with Keith Floen providing keys and supporting vocals, and each of them leaving their signature on the album.

“I’ve got two rock songs in there, Lana is more smooth country, and then Therry is more of a blues singer, and with Keith on keys he does an instrumental in there that’s a killer,” Levesque said.

The album starts off with Can You See Me, opening with the bluesy vocals of Lawson, quickly joined in harmony by Levesque and Floen before folksy instrumentals lift off. It’s followed by Con Man, reminiscent of ‘50s country with a buoyant tune and dancing piano work by Floen.

Tailing the song list is the titular track Take Me Home, with bluesy bass-laden sound that would be at-home emanating from any roadside saloon or diner jukebox.

The album also features a remix of Alberta Blue: A Prairie Sky Lullaby, which was written and printed as a children’s book by Pat Hatherly and illustrated in watercolour by Jesse Horne.

Playing at the Flare N' Derrick marks a comeback from the pandemic, which Levesque conceded was hard on all artists.

“It’s been a challenge because musicians had a couple years' dry spell there,” she said.

“It’s funny because I find the public has reeducated themselves into believing home is a good thing, and that’s why we’re pushing this one, because we want people to get out and experience live music again.

“We got so used to being at home, even myself, but it’s so nice to get out and play again and reconnect with the audience, and so that's what we’re doing.”

Show times are June 18 at 7:30 p.m. and June 19 at 2 p.m. at the Flare N' Derrick, with doors opening an hour ahead of time. Snacks and refreshments will be available and tickets can be purchased at thetravellingmabels.com or in person at AG Foods in Black Diamond or the Little Apple Café in Longview.

Tickets may also be purchased at the door, pending availability. 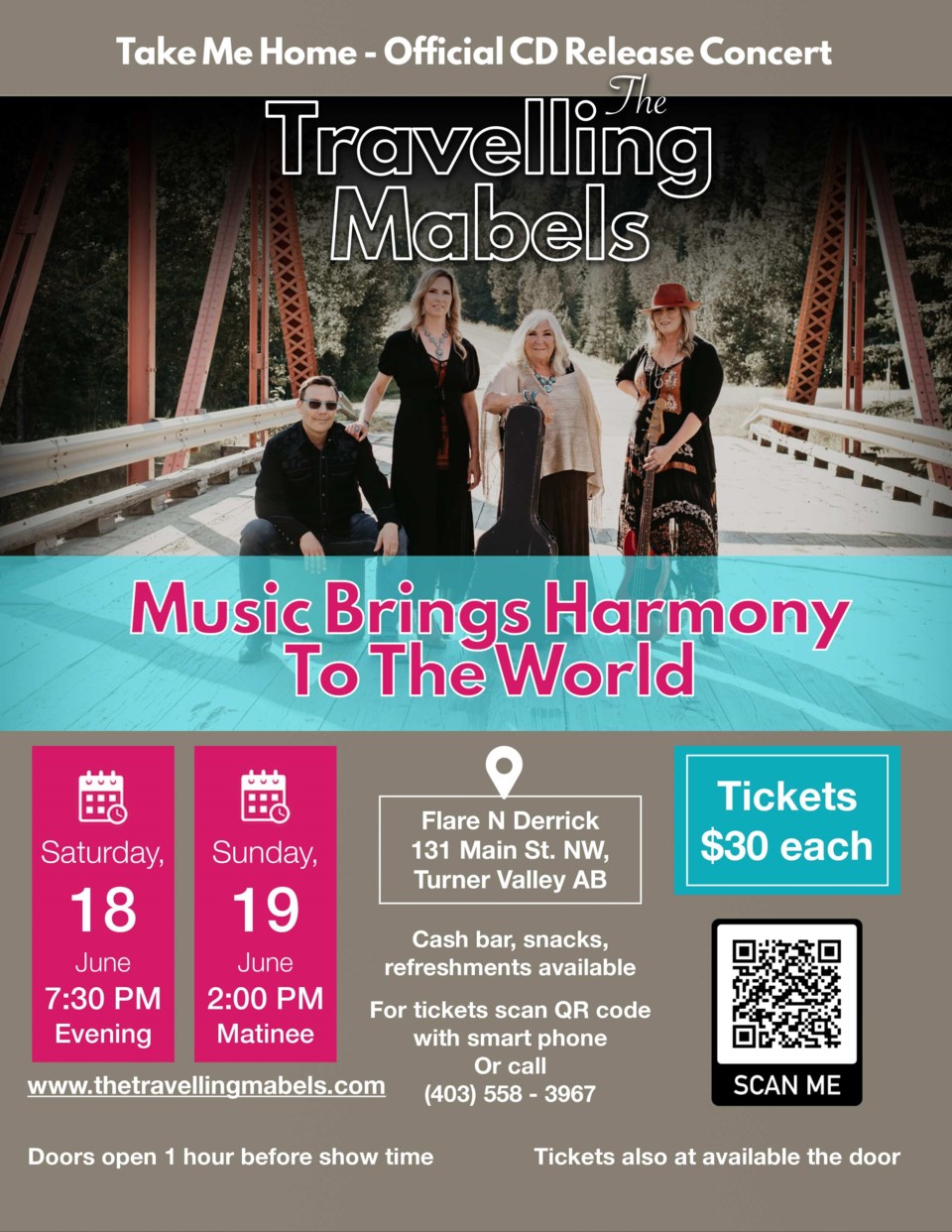