Longview's John Scott and Okotoks' Scott Lepp are among film industry workers awaiting word from the provincial government on when filming can resume in Alberta.
Jun 3, 2020 3:38 PM By: Tammy Rollie 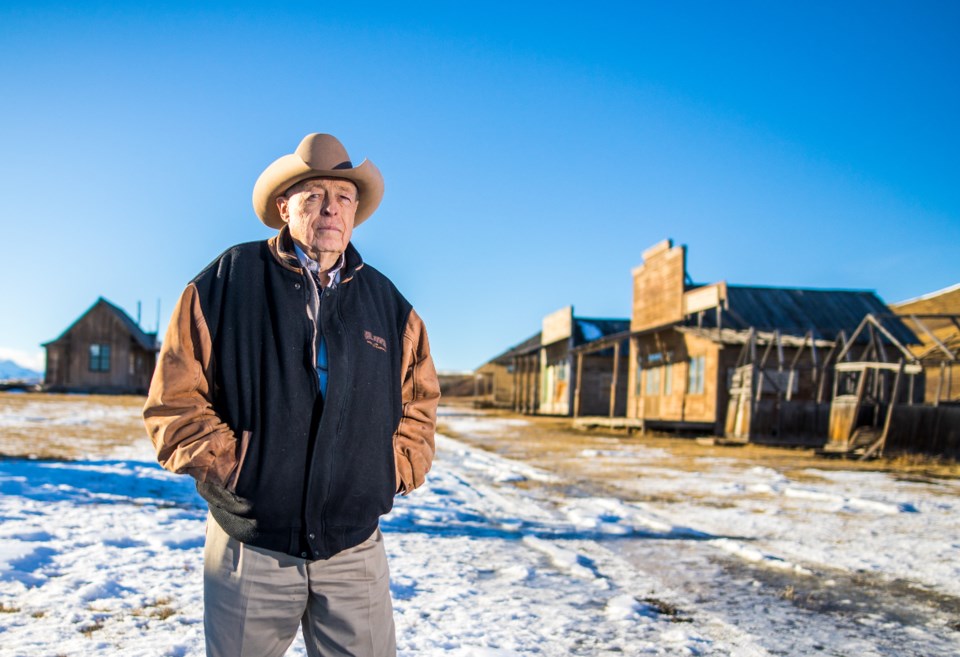 John Scott, at one of his western sets near Longview two years ago, said at least one of the four projects he was scheduled to work on this year has fallen through since the film industry came to a halt when COVID-19 hit Alberta. (Wheel File Photo)

A Foothills legend in the film industry was preparing for a busy year until it all came to a screeching halt in March.

Horse wrangler, stunt co-ordinator and horse and livestock supplier John Scott, who owns John Scott Productions near Longview and has worked on hit movies like The Revenant and Unforgiven, had four projects lined up this year, but that all ended when COVID-19 hit Alberta.

“It’s pretty well the end of our business for this year,” said Scott. “The impact of this is unbelievable. California is on lockdown until the end of August.”

The film industry, which sat idle for two months, is slowly coming back to life in some countries, yet Scott and others in the industry are waiting to hear from the provincial government when filming can resume in Alberta.

He was set to begin work on the big-budget television show Outer Range – starring Josh Brolin - in May, in addition to three other projects in the High River and Calgary areas.

“In Calgary they’re going stir crazy,” he said. “Some projects got put on hold and some will not be made. There was one that was tentatively trying to come in September, October, and it’s gone.”

Scott, who owns a ranch near Longview complete with movie-ready cattle, horses, bison and western-themed movie sets, doesn’t just rely on the film industry, but on the ranching business as well.

Although he’s kept busy with his buffalo, horses and cattle the past two months, business isn’t much better than that of the film industry, he said.

“The cattle business is up and down, the feedlots are taking a hell of a hit,” he said. “There’s such a backlog of cattle – it’s a domino effect down the line. They’re losing 300 to 400 a head.”

The film industry is the most lucrative. It not only provides jobs to Albertans, it supports local businesses from hardware stores to hotels and restaurants.

“It’s just another nail in the coffin with what has happened here,” he said. “I spend a lot of time promoting pictures to Alberta, just trying to bring business up here. We’ve got a lot going for us right now being that the dollar is so low and we have the (Film and Television) tax credit the government has put together.

“I think we’ve got to get everything opened up and get people working again and just have people conscious about their health and get things moving again. This economy has got to get going.”

Movie producer Scott Lepp, of Okotoks, has also been concerned since the industry ground to a halt in March.

“Production can’t go on at all,” he said. “There’s just no work being done. For any shows that were filming at the time of the shutdown, it’s not good and we need them up and going as soon as it’s safe. Right now we don’t know when that’s going to be. It’s costing companies and their vendors a lot of money.”

Lepp was one of the lucky ones.

He was contracted to work as an associate producer by Prairie Dog Film + Television for the first season of the indigenous crime drama Tribal on the Aboriginal People’s Television Network.

The project, which was filmed at the Tsuu T’ina Nation and in downtown Calgary, wrapped up in late February.

“We were going to go right into production for season two but for many reasons we shifted it to late summer,” he said. “Hopefully we can get back and going in the next couple of months once it’s safe to do so.”

The downtime allowed Lepp the opportunity to focus on development, writing scripts and finance plans.

“The thing with the film industry, especially in Alberta, is that we often have downtimes,” he said. “This was not a planned downtime, but I’m always prepared to have downtime. I adjust accordingly and hope we can get back sooner than later.”

Productions across the world are slowly beginning to start back up as the industry navigates towards a new normal, said Lepp, but it remains at a standstill in Alberta.

Lepp said those working in the Alberta film industry are familiar with strict guidelines and, therefore, are adaptable.

“I expect once we understand the guidelines and what we have to work with we’re going to adapt very quickly and it’s going to work well in Alberta,” he said. “I expect increased guidelines around sanitation and other health prevention measures will be adopted. I don’t know a lot yet, but every day we know a little bit more.”

Lepp is hopeful he can return to work no later than this fall.