Foothills band Taken by Sanity on the road to success

Pop band's music video for Streetlights has hit YouTube, promoting its self-produced EP Saturn Days, which releases May 29.
May 29, 2020 2:13 PM By: Tammy Rollie 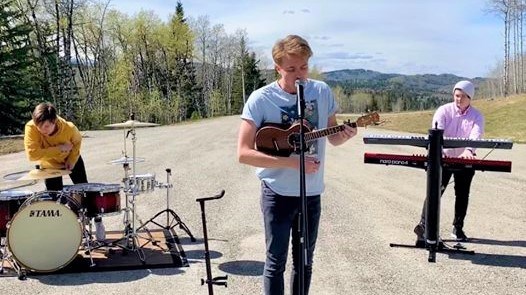 Taken by Sanity takes to the back roads near Bragg Creek to record a video for its latest single Streetlights from its EP Saturn Days, which is out on May 29. (Photo Submitted)

The spotlight is shining on an up and coming band as it gains traction in southern Alberta with its latest music video.

Pop band Taken by Sanity released a video of its latest single, Streetlights, from its self-produced EP Saturn Days, which comes out on May 29.

“Now that we’ve established our sound and what we want to be, it’s imperative that we put out products that we’re proud of and that we think stacks up,” said 20-year-old Morris. “We want to be able to show our fans and communities that we’re developing.”

The storyline for the video follows the pop band’s typical songwriting process, showcasing how a song evolves for Morris and bandmates Blaine and Blair Stillman of Chestermere.

“I went to school in B.C. for over two years so we’ve been distanced for almost the entirety that we’ve been together,” said Morris, who recently graduated from Selkirk College’s contemporary music program in Nelson. “Typically I will record the vocals with the ukulele in my basement and send it to them and they will write their own part and contribute to that.

“We’ll keep sending it back and forth developing the song, and once the song is developed we can finally come together and play it. That’s the whole montage of us coming out to that road, so we can finally reunite and celebrate the music we were able to make together.”

The trio has been playing together for four years, heavily influenced by the likes of Fall Out Boy and Stone Temple Pilots.

They were awarded the YYC Music Award’s People’s Choice Award last fall for their single Sleepwalker from their first album City of Contrast, which was released in June 2019.

And their fans are ecstatic about the trio's latest project.

“I was floored by the positive response that we got from friends and family, and even people that I wouldn’t expect with comments from complete strangers who really enjoy the song,” said Morris. “It’s been overwhelmingly positive and super encouraging, particularly now when we can’t promote the music during our live shows, it’s really nice to have such a supportive fan base that’s growing.”

Morris said the band selected Streetlights as the single for its four-track EP as a way to grab the attention of listeners.

“It’s a radio friendly song and one, that on a first listen, is pleasing,” he said. “We thought it would be a great way to get our music out more.”

Morris said he wrote the foundation for Streetlights in just 20 minutes, but there’s more to the song than the upbeat exterior might suggest.

“I was missing a certain individual and a part of me wanted to write a song that would recognize how I felt, but also provide some form of positivity that I wouldn’t let my sadness take away from the great experiences that I had and all the love and positivity that I felt,” he said. “Basically when it came to Streetlights, I wanted to remind myself that it’s okay to feel sad, but it’s important to remain happy about those memories and still feel the joy that that person brought me.”

Morris compares the musical side of Streetlights to songs like Riptide by Vance Joy and Runaway by Half Alive.

He said Taken by Sanity has come a long way in the past year.

“I feel we have definitely grown quite a bit, not only as musicians but individuals, and I feel that’s reflected in our music. Our new stuff sounds far more professional and I’m really proud of these new songs and I know that my bandmates are as well.”

Morris attributes a lot of their success to the support of communities in the Foothills.

“Okotoks, Black Diamond, Turner Valley, Bragg Creek, from the very start have been nothing but supportive,” he said. “Having that support from our local communities has meant the world to us. It’s helped us achieve some things we never thought we’d be able to achieve.”