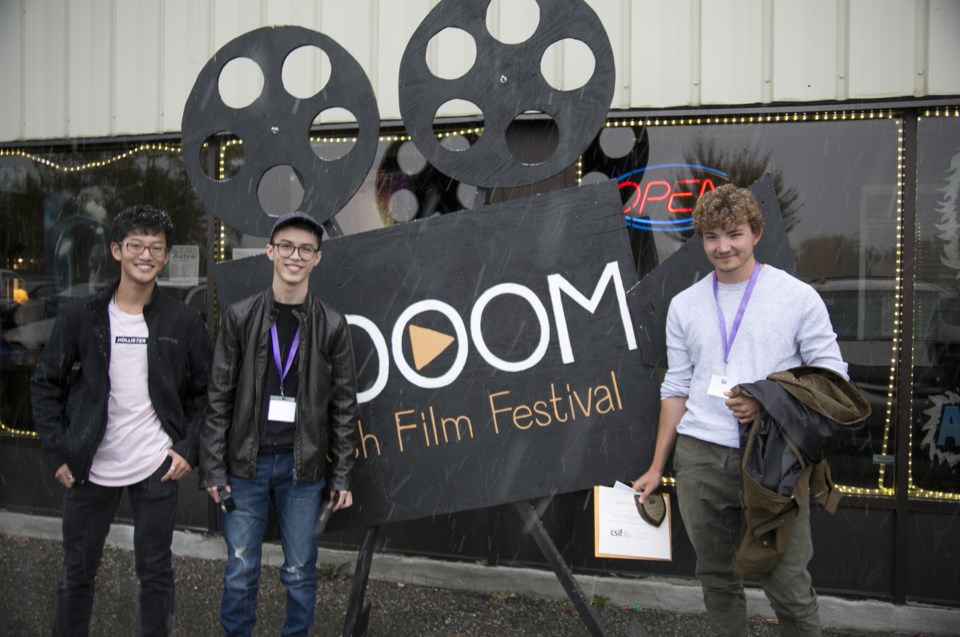 Trying to decide the best flick at a film festival can be so tough it can come down to a coin toss.

It deals with a young man who mysteriously loses his quarter while idly flipping the coin while studying and listening to music.

“I wanted to create something that would leave the viewer wanting more,” said Ashbaugh, a 2019 grad of Foothills Composite High School. “When you don’t give the ending away it let’s the viewer figure out what the best solution is in their head.”

The film has the flipper, played by Talon Greenwood, finally finding the coin on a table with the help of Ashbaugh, leaving it to the viewer figuring out how it got there.

“With black-and-white it is more-so dealing with the story, it doesn’t give you too much else to drive your eye to,” Ashbaugh said. “Black-and-white gives off a certain emotion. It helps with the suspense.”

Meanwhile, when Greenwood pulled off his earplugs, some older fans were feeling nostalgic. He was listening to The Carpenters’ On Top of the World from the 1970s.

“I find the old songs have more meaning,” said Ashbaugh. “It’s just more so telling the story. It kind of co-worked with the story I was trying to tell. I listen to a whole bunch of those classics.”

Flip was far from a 50-50 choice. It was the unanimous judges’ selection among the 14 entrees.

“It’s a fantastic looking film,” said one of the judges. “I’m a big fan of ambiguity in film and storytelling. This looked fantastic, good sound-design, just about everything about it.”

“We wanted to do just a short chase scene and after my friend (LeBlanc) saw Bladerunner, he drew a lot of inspiration from that,” Lee said. “It evolved into a 10-minute film that we put into a film fest.”

He admits it was kind of a dark film.

“It was definitely a blast doing it though,” said Lee, who filmed at Good Shepherd School and the Okotoks Recreation Centre.

Jaxon Pham of Calgary took second-place in the judges’ category with his zombie-apocalyptic Traces.

Ashbaugh also won the Fans’ Choice Award for his mockumentary, Discovering Joel, a spoof on real life Comp grad Joel Harrison who thinks he is kind of cool, but turns out to be an unpopular dweeb who keeps coming back to film class at the Comp – despite having graduated.

“We were working with a comedy which isn’t quite so stereotypical,” said Ashbaugh, who worked with Brady King on the film. “We pitched the idea to Joel and he laughed about it, even though it was mocking him the whole way.

“We built a whole background story with all the films we did (with Joel) in high school. And Discovering Joel kind of sums it all up.”

The film ends with Joel going into hiding with a bigfoot in his mouth,

“We wanted to start off as a serious documentary and then get just as goofy as we could by the end,” Ashbaugh said. “We thought why not throw in Bigfoot and make it seems like Joel was Bigfoot the whole time.”

“That was all Joel’s doing,” Ashbaugh said with a laugh. “He is a charismatic guy. He’s a good friend.”

The other entries at Zoomfest were: The Alien by Emmitt Cardinal; The Void by Joelle Dick; No Human Remains by Fraiser Mark; A Gaming Tale by Eric Martens; Back in Time by Colton Cardinal; Into the Abyss by Ellie Reeve; Ragnarok by Chase Ashbaugh; Found Footage by Eric Martens; Thanksgiving Turkey by Lily Richardson and Kaylee Aymont and Microwave Problems by Jacob Helton.