Elma Street gets fancy with gingerbread

The Okotoks Art Gallery and three heritage homes on Elma Street are housing a sweet surprise within their walls.
0
Nov 21, 2018 8:52 AM By: Tammy Rollie 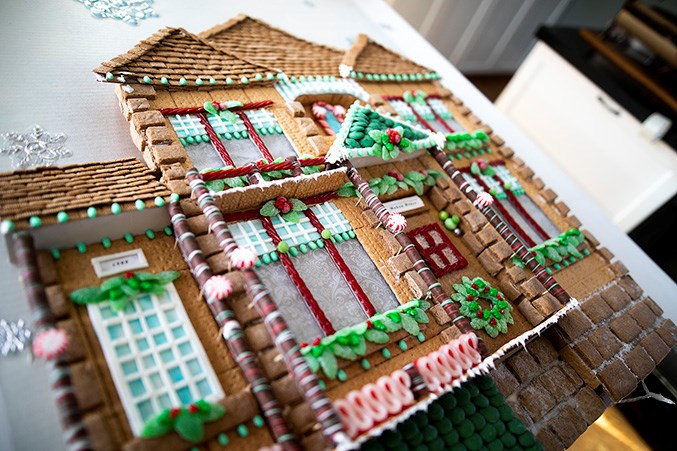 The Okotoks Art Gallery and three heritage homes on Elma Street are housing a sweet surprise within their walls. Lineham House Galleries, 94 Take the Cake and CD Bloom & Coffee Bar are raffling off elaborate gingerbread houses – some mimicking their own buildings – in the Elma Street Gingerbread Arts Festival while the art gallery displays houses made by residents and town employees in its Gingerbread Station exhibit. Gingerbread Lane on Elma Street boasts five edible houses created by Foothills artists and artisan bakers, and sponsored by local businesses. Four will be raffled off to raise money for the Okotoks Food Bank with draws on Dec. 20. Raffle tickets cost $5. All three shops are collecting non-perishable food items for the food bank during the event. Sherry Lindenback, owner of 94 Take the Cake, said she and her staff built a large-scale gingerbread house featuring edible jewels and another to emulate her business. “We built two very different designs,” she said. “One is a replica of 94 with an open concept so you can see into the backside of the house with little bakers making little cookies.” For Lindenback, Gingerbread Lane is a way to bring exposure to Elma Street businesses while celebrating the simpler days. “We want to solidify the fact that it’s Elma Street and a heritage district,” she said. “We really want to bring back the heritage idea and what the holidays should mean - spending time with family and doing creative things and getting less commercialized and more about what Christmas used to be like hand-crafting. All the businesses involved make everything by hand.” The gingerbread houses at CD Bloom were created by Ginger & Spice Cakery in Okotoks and Grin & Ash in Black Diamond. The flower shop’s co-owner Cindy Boudreau said one is a replica of its own building while the other honours the real estate business in Okotoks. “They’re large scale and professionally done and quite exquisite,” said Boudreau. CD Bloom is located in a heritage home built in 1904, with a portion added on in the 1990s that maintains the house’s heritage look, said Boudreau. “When we looked at ideas for the gingerbread houses we thought with us being a new business on the block this house is very recognizable so why don’t we replicate this beautiful home,” she said. “We wanted to make sure that they’re pieces of art and would represent not only Elma Street but the talented people in our community. Anything to draw people onto Elma Street is a plus for the businesses here.” The gingerbread house at Lineham House Galleries won’t be included in the raffle due to its unique nature. Co-owner Cheryl Taylor designed and built the house with the help of artists to represent Mahon House on the corner of Veterans Way and Elma Street, but with a twist. “We wanted a historic home and Lineham House has already been done beautifully in cake form for our grand opening last year,” she said. “We thought we would chose another historic home on the street and Mahon House is the most beautiful heritage home we have in Okotoks.” Taylor said the house is displayed in the front window to emulate the old general store shop windows of decades ago. What makes it unique from the other houses is it’s built in high-bas relief style, she said. “It’s a façade, rather than a complete three-dimensional house,” she said. “It sticks out about four inches in depth and is 30 inches wide by 45 inches tall.” On North Railway Street, the Okotoks Art Gallery has more than 20 houses on display, created by members of the public and employees in the Town’s various departments. “We always do a Spirit of Christmas show in both galleries and we just wanted to add to it to keep it fresh and exciting with a gingerbread house exhibit,” said Andrea Spiers, events assistant. Taking centre stage is a replica of Okotoks’ museum, a restored 1905 Welch home. The 20-plus submissions are placed throughout the small gallery with the opportunity for the public to vote on their favourite. “Because it’s the first year we’ve done it we also put it out to all departments in the town,” said Spiers. “We’ve got a mixture this year. The stuff that’s coming in is fabulous.” The art gallery provides a map showing where the gingerbread houses are located on Elma Street, said Spiers. She hopes to make the inaugural event an Okotoks tradition. “We’re hoping it will just grow next year and it will be throughout downtown,” she said. Cash prizes will be awarded to first, second and third-place winners each in the adult, children’s and town department categories.