A whimsical sculpture in the eco centre could change the way people think about the three Rs.
0
Aug 22, 2018 6:29 AM By: Tammy Rollie 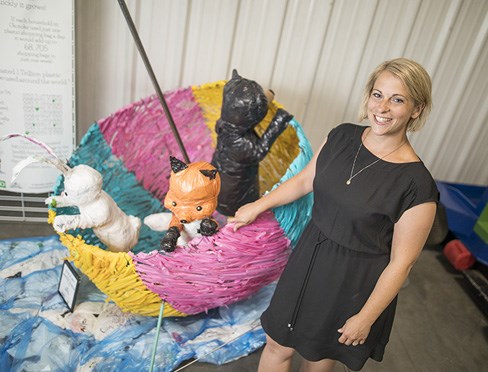 The River of Hope was created by artist Jennifer Stables with help from youngsters at June’s Children’s Festival.

A whimsical sculpture in the eco centre could change the way people think about the three Rs. Okotoks artist Jennifer Stables is hoping her creation, River of Hope, gets people talking about how they can say no to plastic, rather than choosing to recycle or reuse it. The sculpture was previously in the Okotoks Recreation Centre and will be moved to the Epcor Eco Centre in the operations building in September. “The response has been really positive,” she said. I got so many responses that it was a really great eye opener.” Staples built a whimsical makeshift boat with three animal characters, a bear, fox and rabbit, using repurposed plastic materials and invited youngsters at the Children’s Festival in June to create a river of plastic using bags provided by the eco centre. “Everyone added one plastic bag to the river just to see how quickly using plastic bags can add up,” said Stables. “At the Children’s Festival I asked each child who put a plastic bag on it to write a message of hope on it. The younger ones drew pictures and wrote their names on it. We had at least 100 people who contributed to it.” Stables said if every household in Okotoks used one plastic bag each day it would add up to more than 68,000 in a week. “When you say yes to just one plastic bag it adds up quickly,” he said. “Chances are we’re using a lot more than that.” When Stables was asked to create a project relating to the environment for the festival, she went to the Town’s eco centre for inspiration. “I met with the environmental team and Paul Lyons at the recycling centre and we decided plastic bags, in particular, is something we can really change in a positive way and we can ask ourselves, ‘Do we really need these?’” she said. “Recycling is becoming less available now that China is shutting their doors and it still takes so much energy to recycle. It’s not really the solution, the solution is to say no.” Lyons, Okotoks waste services manager, said plastic is creating a lot of problems for waterways. “The concept, and one thing that we wanted to focus on, was to try to help engage our residents in looking at when you talk about the three Rs — recycle, reuse and reduce — we focus a lot on the message of recycling,” he said. “One thing that we discussed, and hoped that the project would be able to do, is to help manage what we are actually producing. The focus was really on how can we reduce what we’re consuming and reduce the plastics that are coming in. Can we limit or reduce the amount of that.” The idea of having an environmental message in the festival came from TD Canada Trust one of the sponsors. Okotoks branch manager Karas Wright said one of the mandates of the financial institution focuses on protecting the planet and wanted to get a message out to the public to help aid the environment during the festival. “I’m so thrilled to see the creativity that was involved,” said Wright of Stables’ sculpture. “The children’s festival and Okotoks parade are my most favourite time of the year.”