The easing of provincial health restrictions has meant the show will go on for Okotoks Cinemas.
Jun 1, 2021 8:00 AM By: Brent Calver 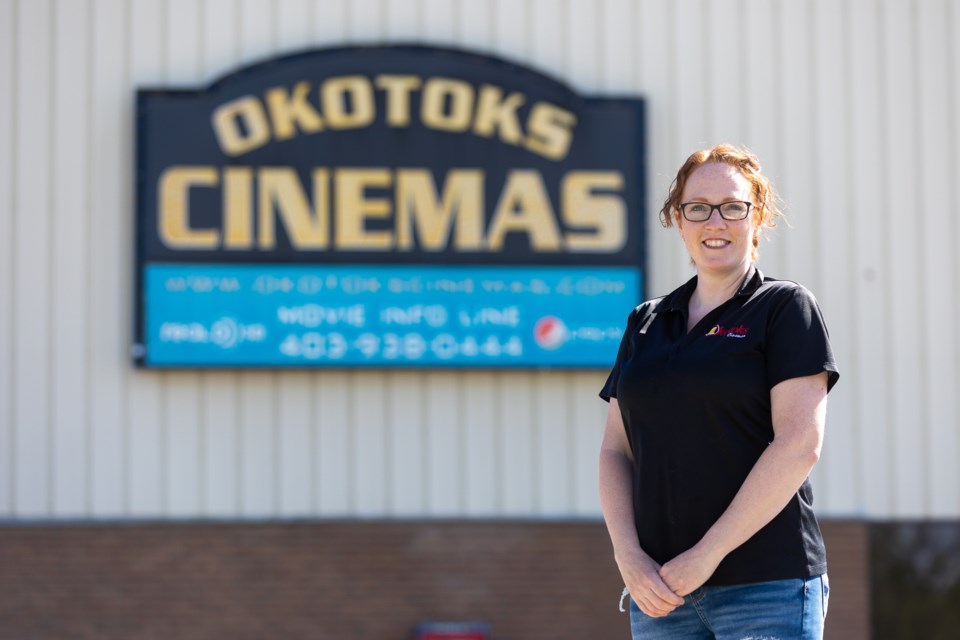 Okotoks Cinemas general manager Amber Wigg said it is preparing for the opening of theatres for movie-goers.Brent Calver/OkotoksTODAY
The easing of provincial health restrictions has meant the show will go on for Okotoks Cinemas.

“It’ll be really nice to finally open and to have people back in the theatre again,” said Amber Wigg, general manager of Okotoks Cinemas.

The reopening, while a blessing to Wigg, means a dramatic shift in plans.

Theatres have been given an estimated June 10 opening, at 1/3 of fire code occupancy, as part of Stage 2 of Alberta’s Open for Summer plan announced May 26, contingent on being two weeks after 60 per cent of eligible Albertans are vaccinated and hospitalizations drop below 500.

The manager of the independent Okotoks theatre said it came as a surprise, but it will still manoeuvre to open for movie-goers.

“I know a lot of people are really looking forward to it,” she said. “They come in for popcorn every weekend, which we’re grateful for, and they’ve shown a lot of excitement to come back to the movies."

Responding to strong customer demand, the theatre had been saving funds for new seats, Wigg said, but under restrictions during the COVID-19 pandemic, the theatre had to close its doors, pivoting to selling popcorn and mini doughnuts via curbside pickup.

A successful crowdfunding campaign started in January and business sponsorships secured the funds needed for the independent theatre to upgrade their seating.

Once delivered and installed, the theatre will sport significantly upgraded reclining theatre seats similar to those in large chains, and large VIP recliners in spacious aisles.

“We know we have to step it up to get people to come back and to be excited for an increased experience,” Wigg said.

The new seats, however, take time to be built, time that Wigg was expecting to have before restrictions eased.

“Manufacturing and shipping is really expensive, and with the pandemic, things have been slowed,” she said.

The chairs are slated to be installed by the first week of July, a timeframe that Wigg said worked well until the recent announcement, and like many businesses, she can’t pass up the chance to operate.

“We’ve been sitting in this holding pattern for such a long time, and trying to keep our doors open with our popcorn sales,” she said.

“But people can still come have a great movie experience for the second half of June, but it will be in our regular seats.”

Part of the fundraiser included bridge building with neighbours.

“With the fundraising we’ve been doing for our new seats, we’ve been able to get to know a lot of good small businesses in Okotoks,” she said.

One such business was Simply Floors, which Wigg said ended up donating the flooring to refinish the lobby in exchange for advertising.

Another creative relationship forged will mean new offerings at the concession.

“We thought this could just be a really great relationship,” Layton said. “Instead of people getting their treats from other places on the other side of town before the movie, they could just get it here, fresh."

Despite the hurdles, Wigg is confident that in a month’s time, the refreshed theatre experience will please Okotoks movie-goers.

“I’m glad to hear people are still really, really excited about that, because I was worried people were going to be comfortable in their own homes,” she said. “But people are showing a lot of interest in getting back out and coming to the theatre and having that experience."

As part of Stage 1, outdoor social gatherings, with distancing, are allowed to include up to 10 people, although indoor gatherings are still not permitted, outdoor patio dining can resume with a maximum of four people per table, outdoor physical, performance and recreational activities is permitted with up to 10 distanced people as well by appointment personal and wellness services is once again permitted.

Stage 2, which can begin as early as June 10, two weeks after 60 per cent of Albertans 12-plus have received at least one dose, and hospitalizations are below 500 and declining, will allow larger public outdoor gatherings (up to 150 for festivals or concerts and 1/3 of fire code occupancy for outdoor grandstands) as well as recreation centres, indoor fitness, movie theatres and libraries to re-open.

Additionally, youth and adult sports can resume without restrictions both indoors and outdoors, with masking and distancing requirements still in effect.

Stage 3, two weeks after 70 per cent of Albertans 12-plus have received at least one dose is expected to be in effect in late June to early July, will see all restrictions lifted, including the ban on indoor social gatherings. The Province added that isolation requirements for confirmed cases of COVID-19 and some protective measures in continuing care settings will remain in place.

For more information go to alberta.ca/enhanced-public-health-measures.aspx