The Okotoks theatre company will be performing "Fairy Tales Go To Court" March 3
Feb 28, 2021 8:00 AM By: Brent Calver/OkotoksToday.ca 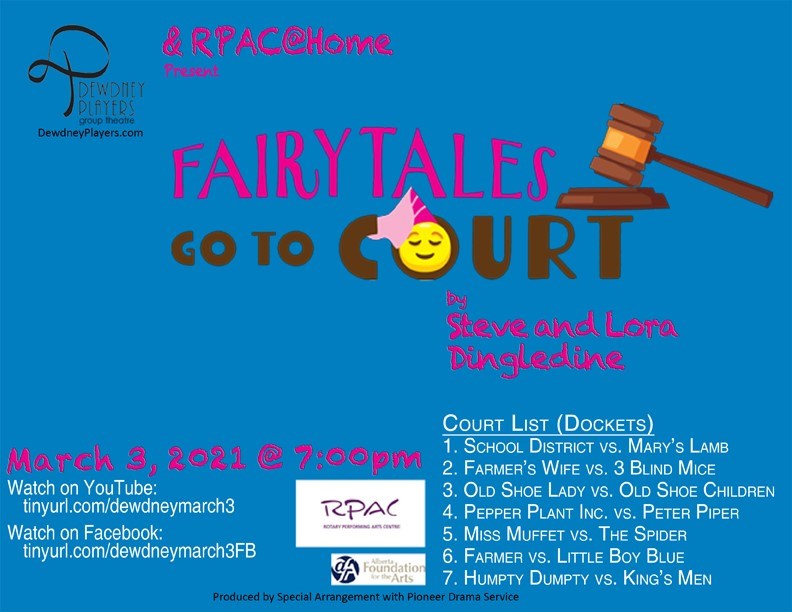 The Dewdney Players are taking their show online come March.

As part of the Rotary Performing Arts Centre’s RPAC@Home video series, the long-running Okotoks theatre company will be broadcasting a Zoom-style play on March 3.

Fairy Tales Go To Court will feature a lineup of classic nursery rhyme and fairy tale characters each appearing before a judge in seven skits.

Viewers will get to see scenes reminiscent of Judge Judy where comical legal proceedings play out between characters such as Little Miss Muffet, sued by the spider, or Mary, who encounters legal trouble after bringing her little lamb to school.

Director Maree Okabe is confident the show will be enjoyed by all ages.

“It's a fun show. And I feel like kids will enjoy it. And, you know, yeah, I think the kids will find it quite funny with the different characters that come on the screen," Okabe said.

Dewdney veteran Daniel Rose plays a host of characters in the show.

Among them is Peter Piper, on trial for stealing pickled peppers.

While grateful to be able to perform, it presents a different kind of experience for the actor.

Without in-person contact, the group has had to keep multiple copies of the same prop, and remain inside its camera’s frame, changing the dynamic.

Rose misses the interaction with the audience.

“The big difference is just not having an actual audience there to interact with," he said. “It's such a huge part of theatre — you feed off the energy from the audience.”

He added while he’s enjoyed the new experience, he’ll be happy to return to the stage when possible.

As with other plays that have taken to online meeting software to perform, the show will take place with actors performing in a Zoom or similar online meeting platform, which is then captured and played on a streaming platform such as YouTube.

Okabe said while the new methods have been challenging, but credits the technical team, consisting of Kyle Riege and Nikki Brown, for helping the show run smoothly.

One challenge is the lack of opportunity to build a rapport among cast members.

“They don't really have a formed relationship and a formed bond,” Okabe said. “It's very hard to become friends with your co-actors when you've only ever met on zoom.”

Other regular rhyme characters viewers can expect to see in the defendants box are the Three Blind Mice and Little Boy Blue, brought to answer for their comical crimes.

It can be viewed, along with past RPAC@Home shows, can be viewed on the Town of Okotoks YouTube channel at https://www.youtube.com/user/townofokotoks/videos