Concert series in the High Country still holding on

Beneath the Arch has cancelled three concerts lined up for this fall. Those scheduled for this winter and spring could still go ahead.
Aug 26, 2020 10:30 AM By: Tammy Rollie 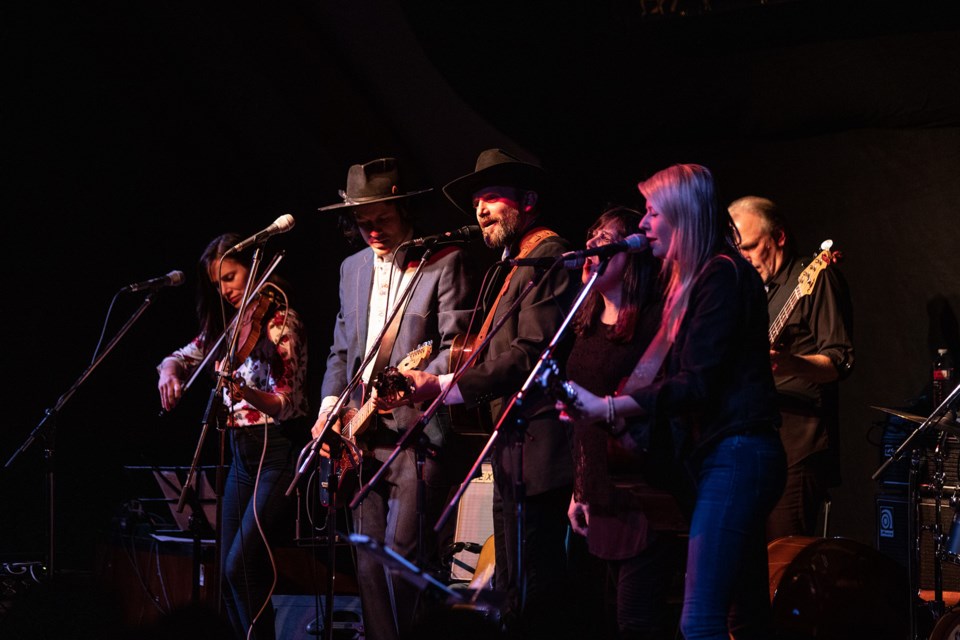 Barney Bentall performs in a previous Beneath the Arch concert at the Flare n' Derrick Community Hall. This fall's concerts have been cancelled, yet there's still hope for 2021. (Wheel File Photo)

Volunteers with Turner Valley concert series are hopeful that part of the coming season will still be salvageable.

Due to the uncertain future of the COVID-19 pandemic, Beneath the Arch Concert Series artistic director Suzanne Searle said she cancelled three concerts lined up for this fall, but is hopeful those scheduled this coming winter and spring will go ahead.

“Beneath the Arch is not over, we’re just having a little pandemic break here,” she said. “As far as I’m concerned, as soon as we can resume proper operations we will be doing so.”

Searle said the concert series cancelled the Weber Brothers show in March and Lonesome Ace String Band in April, and also made the decision last spring to cancel the three shows lined up for September, October and November.

“I am so disappointed, but I knew that this would probably have to happen,” she said. “As promoters and supporters of live original music and the artists that create this music, we are saddened but not defeated. We are hopeful that we will be able to resume our usual operations in future.”

“I feel so badly for these musicians, who, a lot of them, make a great deal of their living touring and selling CDs when they tour,” she said.

Searle said she had booked the seven-concert 2020-21 season well before the COVID-19 pandemic hit Alberta.

Despite regulations starting to relax as the spring progressed, Searle said she knew it wasn’t feasible to continue hosting the concerts with just 50 or 100 people in the audience. The hall’s capacity is 285.

“As a not-for-profit-society, a smaller audience would not be financially sustainable,” she said. “We’re all volunteers, so we certainly have a responsibility to be fiscally responsible and even if they allowed us half of that or, let’s say 100 people, it wouldn’t be fiscally manageable for us to operate that way. We have to make a certain amount of money to keep going.”

Expenses for each concert include paying the band, sound man, hall rental, caterer to serve supper to the band and purchasing food and drinks for the concession, Searle said.

“Certain costs are fixed costs, yet you would be bringing in half or less of the funds,” she said.

Hosting a smaller audience could still put the public at risk, Searle said.

“There is no way that we can have a large gathering, as per MOH (Ministry of Health) guidelines, and our mature audience would probably not be comfortable with a smaller gathering either,” she said. “It is so difficult to socially distance at an event like that.”

With three of the coming season’s seven concerts cancelled, Searle said it was decided to not sell season tickets, but instead sell tickets on a concert-by-concert basis.

She said those who purchased rush tickets for the March and April concerts were refunded, and those who had purchased season tickets had the option to have their approximately $40 for the two concerts refunded.

“We gave the season ticket holders an option of getting their last two concerts from 2020 refunded because they had already paid for them or they could choose to donate that money to Beneath the Arch,” she said. “Some people did donate back to us, which was very nice.”

Going into the 2020-21 season with so many unknowns is challenging, but Searle is keeping her hopes high.

“I’m very disheartened, but I’m not defeated,” she said. “I do hope I retain my solid core of volunteers. A lot of them have been doing it for a long time. You cannot do a concert series without a committed core of volunteers who are educated in what they’re supposed to be doing.”

Searle said the concert series has paid five deposits to bands that were unable to perform due to COVID-19 restrictions from Alberta Health Services, but that she wouldn’t consider asking for the payments back due to the financial hardships musicians are facing.

“Plus I will want to book those people again,” she said. “I chose them once, so those deposits would stand for the next time.”

Concert cancelled for this fall include Blue Moon Marquee and the Ryan McNally trio in September, Birds of Chicago in October and Kacy & Clayton in November.

To keep up to date on the Beneath the Arch Concert Series visit http://www.beneaththearch.ca/