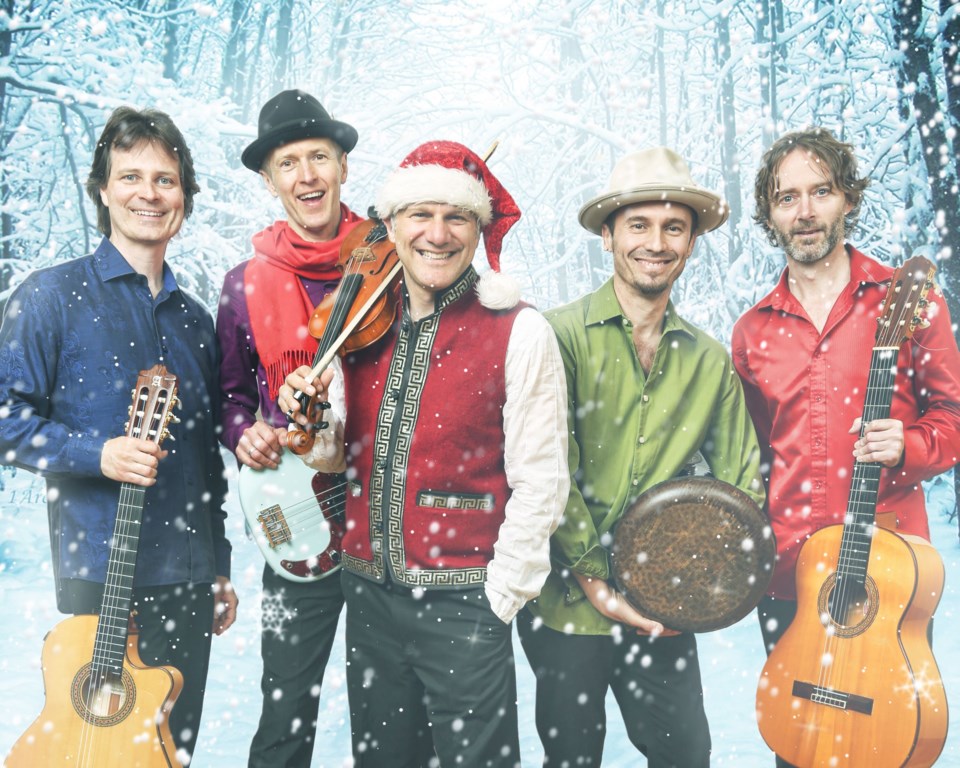 Passports aren’t needed for those wishing to experience Christmas music from around the world this season.

Three-time Juno Award nominee and Billboard charting Ontario band Sultans of String will perform its eclectic array of Christmas music in its Christmas Caravan Show at the Beneath the Arch Concert Series in the Flare ‘n’ Derrick Community Hall Dec. 1 at 3 p.m.

“It’s a very special show,” said violinist Chris McKhool. “Most people know us as predominantly an instrumental band, but this concert has a lot of singing and we will have our audience singing along, too.”

The five-piece band consists of McKhool on violin, Kevin Laliberté and Eddie Paton on flamenco guitar, Drew Birston on bass and Eric Breton on percussion. The band is known for its Celtic, gypsy jazz, Arabic, Cuban and South Asian rhythms.

McKhool said the Christmas Caravan Show is designed to bring world music rhythms that the Sultans of String love to play and audiences love to hear this time of year, as well as some fun originals, to venues across North America in the weeks leading up to Christmas.

“We do an interesting version of Silent Night and a Happy X-Mas (War is Over) blowout number to get everyone, including the audience, singing,” said McKhool.

“We’ve got one of my favourite songs in the show, Jesous Ahathonhia (Huron Carol),” he said. “We went back into the archives and found the original lyrics of the song written in the 1600s. People will be able to hear the intent of Canada’s oldest Christmas carol. It’s like rediscovering a piece of Canadian history.”

McKhool said the band sets up the songs before performing them, offering some background and insight for the audience.

The Sultans of String have been bringing the Christmas Caravan Show to North America for three years, he said.

“What we endeavour to do is bring a really fun, multicultural take on Christmas songs,” he said. “It’s songs like you’ve never heard them before. We bring really exciting energy of world music to them. Nothing is done in the plain way. Everything is done with a lot of energy and fun.”

The show was such a hit in the United States last year that it made the New York Times Hit List and the Billboard World Music Charts, which McKhool said is very unlikely for a Canadian World music band.

Sultans of String brought the show to British Columbia last year and plans to tour the Prairie provinces next year. Performances also take place throughout Ontario and into the north eastern United States.

For McKhool, it changes things up for the band one month a year.

Sultans of String isn’t new to Beneath the Arch ticketholders. The band performed in a matinee concert in Turner Valley two years ago.

“It was really special last time when we performed for Beneath the Arch so we’re coming back because they really understand how to integrate a family audience into a concert,” said McKhool. “A concert like this is such a great opportunity to reconnect with family.”

Tickets to see the Sultans of String Christmas Caravan Show cost $25 in advance, $30 at the door and $10 for children, and are available at the Bluerock Gallery in Black Diamond or online at www.beneaththearch.ca. Season tickets are still available for purchase to guarantee a seat for the season’s remaining concerts.