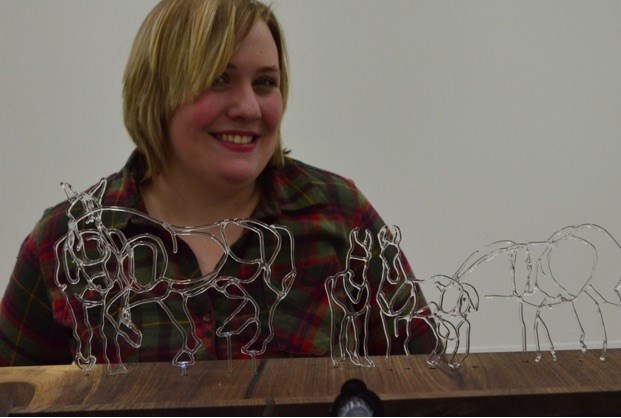 DeWinton artist Robyn Feluch is doing a painting demonstration at the Calgary Stampede and then donating pieces to be sold to support the Western Art Scholarship. (Photo submitted)

A DeWinton artist is doing it the cowboy way at the Calgary Stampede Western Art Show this year — helping those who have helped her in the past.

The 24-year-old Feluch is doing two public painting demonstrations. One is downtown at Calgary Rope Square July 8 from 8 a.m. to noon and the other July 12 at the Western Oasis within the BMO building from 5 to 8 p.m.

“They will be based on the western-lifestyle in Alberta,” she said. “All my paintings will go to the scholarship.”

It’s payback for a show that helped her.

Feluch received a $1,500 Calgary Stampede Western Art scholarship in 2013 for her painting The Story Begins Here, which was a bison painting dealing with the past and present history of the animal in Alberta.

She used her scholarship funds well.

She has just earned her bachelor of fine arts degree from Alberta University of the Arts in Calgary (where Joni Mitchell went to art school).

Feluch was on her way back from Whitehorse, Yukon on July 4 after receiving an Adventure Scholarship. The scholarship allowed her to explore the Yukon and create art based on her adventures. She also received hands-on experience about operating a gallery at Lumel Art Studio.

As well, she did community work in the Yukon, including assisting a therapeutic riding program.

“Whitehorse is a phenomenal place, the landscape is like nothing I have ever scene before,” she said. “It is varied in such extremes – there was never a place that wasn’t phenomenally beautiful.”

Meanwhile, The Greatest Outdoor Show on Earth continues to recognize her talent.

Feluch is among eight semi-finalists for the 2020 Calgary Stampede Poster competition.

“I can’t tell you what the design is,” she said. “But it has something to do with the history of the Calgary Stampede. The Stampede has been a huge part of my life – my grandparents worked at the Calgary Stampede when they had the horse racing down there. They helped with the jockeys and packed horses and other things.

“The Calgary Stampede is something I have learned to value as an adult.”

“It was phenomenal for me as an artist,” she said. “To have the flexibility that Centre for Learning at Home gave me, allowed me to go to adult day-time (art) classes from Michelle Grant, Doug Swinton and Doug Levitt. I was able to accommodate my passion for my art that if I went to a regular high school I wouldn’t have been able to attend.”

Feluch will have her glass artwork at the Western Art Show in the BMO building as well as some pieces in the mini masterpiece area.

Her glasswork will go towards pursuing her art career. She plans to earn her master’s of arts degree in the United States in order to teach art in the future. To see Feluch’s work go to robynfeluchart.com