Two high school teachers accustomed to putting their students in the spotlight are now basking in the glow themselves.
Jun 13, 2018 8:47 AM By: Tammy Rollie 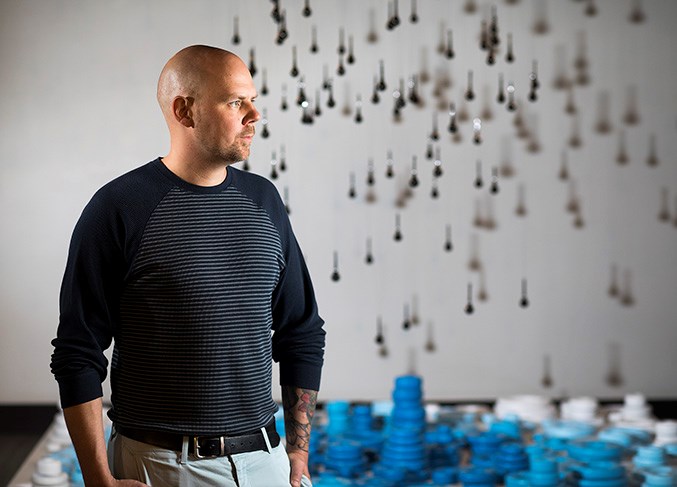 Artist and teacher Ryan Smitham with one of his art installations at the Okotoks Art Gallery on June 9.

Two high school teachers accustomed to putting their students in the spotlight are now basking in the glow themselves. Accomplished artists Paul Rasporich and Ryan Smitham, who both taught at the Alberta High School of Fine Arts, are revealing their own talents to the public with exhibits at the Okotoks Art Gallery. Rasporich is sharing his love of fishing in No Clear Line, which features a series of sculptures, drawings and paintings, while Smitham’s exhibit, Time is a Flat Circle, addresses decomposition, erosion, violent conflict and the depletion of natural resources through various mediums. An avid fisherman and outdoorsman, Rasporich chose a subject matter that is close to his heart, creating images of fishermen on the Bow, Highwood and Sheep Rivers. Author Norman Maclean’s quote, “In our family, there was no clear line between religion and fly fishing,” inspired the exhibit’s name. “Nothing makes me happier than when I’m fishing,” said Rasporich. “That’s when I do all my major thinking and talk to God.” The Alberta College of Art graduate got his start in design, opening a design and illustration business in Vancouver with wife Lee Kvern in 1987, but it was his love of painting that started to take over his life. The couple moved to Calgary where Rasporich exhibited his paintings at Masters Gallery in Calgary and in the mid-1990s he began painting portraits of families and business leaders. Rasporich then obtained a teaching degree and has been teaching high school art since 2002, including Oilfields High School in Black Diamond and now the fine arts school in Okotoks, and continues to develop his painting, drawing and sculpting skills. Inspired by the likes of Salvador Dali, Johannes Vermeer and Norman Rockwell, Rasporich’s most recent inspiration came while travelling in Europe three years ago visiting places like the Vatican and catacombs when he was captivated by a stained glass mosaic of a silhouette of a fisherman at the Christo Sole in Rome. “I just wanted to explore this theme in my mind of the silhouetted fisherman and the significance of that image,” he said. Fishing has always been a spiritual experience for Rasporich. It began when he was a child on a 10-day ice fishing trip with his family in Thunder Bay. Rasporich said they didn’t have much luck until the last day when they were pulling up lines and one of the flags went down. When they ran over to pull it up, the line was broken. It happened again at another hole. When the marker went down on a third hole, they pulled hard and caught a large fish that had the two other lines hanging from its mouth. “That was one of the greatest moments of my life is when we landed that fish,” he said. “I believe that fish wanted to be caught in that manner.” Rasporich has had many influences during his years as an artist. Among them was Smitham. “Ryan and I followed each other’s teaching paths,” he said. “I’ve learned how to teach digitech and computer art from him, and we both taught at the Alberta High School of Fine Arts. Our career path is interwoven.” Smitham taught at the fine arts school for seven years before going to Calgary to teach. He said he hopes Time is a Flat Circle will get people thinking about the impact they have on the environment. Among the displays is a forest of burnt lodgepole pine trees with some pine cones Smitham bronzed to represent new life. “The lodgepole pine can only release pollen from pine cones in extreme heat,” he said. “Wildfire helps propagate that species of trees.” Smitham received support from the Province to bring the trees to Alberta from the Okanagan in 2016 and coated them in a plant-based resin. He received a grant from the Alberta Foundation of the Arts to fund the project and had help from a friend in forestry to harvest the trees. Another of his installations features large black droplets dangling above what appear to be ripples. Smitham said he was inspired by patterns in nature and human impact. “It relates to the environmental calamity and also beauty in its organic form,” he said. Another piece, a large wooden “F” on a tilt with a baseball cap atop, addresses a societal issue - the value Canadians place on grades and how the letter is often viewed as negative, often a swear word or failing grade. It was during Smitham’s time as an art student at Foothills Composite High School, under the tutelage of art teacher Rhonda Watrin, when his creative side was inspired. “It was being a student at the Comp that made me think teaching art would be an interesting profession,” he said. “I’ve been pursuing art ever since.” Smitham graduated from the University of Lethbridge’s fine arts program and received his diploma and an education degree. He taught at the Comp from 2007 to 2016, during which time he took a two-year sabbatical in New York to obtain a masters degree in sculpting. “I’m incredibly thankful for the time I taught at the Comp,” he said. “The support I got was life changing and it had an importance on both my teaching and my art profession. I owe a huge debt of gratitude to the Foothills School Division.” The exhibitions will be available for viewing Tuesdays to Saturdays from 10 a.m. to 5 p.m. until Sept. 1.